How the state fails its little ones 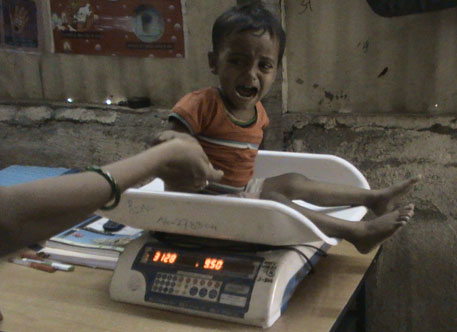 One would expect the mother and child day care centres run by the government—anganwadis—to ring with the laughter and screams of frolicking children. What one sees instead are children who go to sleep or simply lie down as soon as they enter an anganwadi late in the morning. The children in the anganwadis are in the age group of six-months to five years. They eat the state-provided food in silence, not demanding more, and again lie down till their mothers arrive to collect them late in the afternoon.

These are the malnourished children of the world's largest democracy who have no energy to enjoy their precious childhood. I visited anganwadis after anganwadis only to face this bone-chilling silence. The realisation of the growing number of children losing their childhood to hunger and malnutrition struck me in Rafiq Nagar colony of Shivaji Nagar slum in Mumbai, and since then it has changed the way I look at children. The in-charge of the anganwadi said these children lack the energy to play. She also said they cry.

From that moment, malnutrition was no longer a matter of statistics, measurement and policy for me, though I understand their importance in drafting appropriate policies. I began to wonder about the state of mind of the little ones we see around us all the time. A senior journalist from Andhra Pradesh, who has covered malnutrition extensively, says there should be a study to find if these children face mental depression. "Depression is a term usually associated with adults. But it will be interesting to know how it feels to be starving and being constantly ill at a age when you cannot even understand why you are not fed,” she said.

For me it will be as important to know how a child feels on seeing the kid of his mother's employer eating the best quality food when he is not sure of one square meal a day. According to the HUNGaMA report released in January 2012, 42 per cent of Indian children are malnourished. The numbers are an indicator of the extent to which children in our country are deprived of a healthy and happy childhood.

Apart from poor implementation of policies and schemes, the current policies also fail the children. According to WHO, a child has to be measured for three things for determining malnutrition—underweight (weight for age), (height for age) and wasting (weight for height). The Centrally sponsored Integrated Child Development Services (ICDS) considers only wasting as a criterion. This leaves a large number of children out of the data required for making policies and judging outcomes.

In Rafiq Nagar one can find umpteen examples in which children would fall in the category of moderate acute malnutrition (MAM) if stunting and underweight are added to the criteria. ICDS would not provide food and other benefits to these children.

As I took the turn towards Rafiq Nagar from the main road, I was greeted by green mountain peaks. But as I moved closer, the peaks unfolded into mountains of garbage of Mumbai. Rafiq Nagar is situated on one of the biggest dumping yards of Asia. Children can absorb much lesser amount of nutrition due to adverse environmental conditions. Scores of children die due to lack of nutrition here, but as there cannot be conclusive evidence of death due to malnutrition, the dirty truth of Mumbai's underbelly keeps growing.

Khammam in Andhra Pradesh is more than 900 km from Mumbai. But the things are not much different for the children there either. Khammam is one of the focus districts for removal of child malnutrition. Largely occupied by internally displaced people, the nutrition centre in the main town as just as depressing. I saw a 20-day-old severely undernourished child brought to the nutrition centre even before being named. One could actually see the child's bones sticking through the skin. The in-charge of the centre said he will survive, with the rider “if he is provided good food after leaving the centre in few weeks”.

The major problem internally displaced people face is non-recognition of their settlements. As most of them occupy land in reserved forests, the government is reluctant to open anganwadis in their villages. "Opening anganwadis will mean the government is sort of giving a legal status to the village. Forest department, then, will not be able to displace them easily," said employee of an NGO of the area.

Some of these settlements are located deep inside the woods. One of them that I visited had closest road 3 km away. The rest of the journey was through the jungle. It is unthinkable that the villagers will go to any anganwadi to ensure their little ones get some nutrition. The residents came to Andhra Pradesh from Chhattisgarh due to fighting between the Maoists and the state. But here too their citizenship rights are validated only when census data is collected. Rest of the time, the residents and their children, remain unknown, non-existent. Amidst the green cover of Dandakaranya, malnutrition grows day by day.