How to cope with heat waves

The Indian Institute of Public Health (IIPH) at Gandhi Nagar carried out research along with Municipal Corporation of Ahmedabad on heat waves and its impacts on human health.  It is known that temperatures in the city during summers rise up to 47°C. It results in several health consequences, sometimes reaching extreme levels; many people lose their lives.

In 2010, the city witnessed around 300 deaths; in 2013, 160 deaths occurred due to heat waves. To deal with the challenges, IIPH along with the municipal corporation developed a heat mitigation programme to save people from the impact of heat waves.

In this programme, the important intervention was the prediction of weather at least seven days in advance.  Then people were alerted about the weather conditions. They were allowed to take rest in the afternoon. Additional water was supplied to people during extreme heat waves. More public places were created for people in the city where they could take rest. 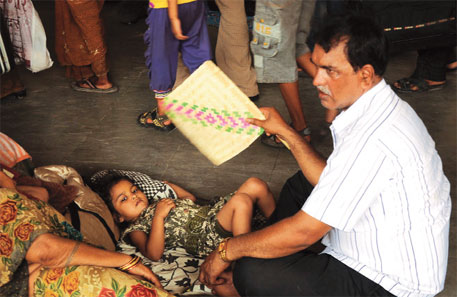 These measures helped saving many lives (see 'Ahmedabad's beat the heat plan'. A particular challenge in the action plan related to spreading awareness. For the purpose, posters and pamphlets were designed and the administration tried to reach out to people. The pamphlets were used to give health tips and distributed among students who were asked to carry them home.

Not only families but medical workers and community members were provided health fact sheets and asked to reach out to groups in the city. These efforts were needed to prepare residents of the city for the summer season.

Hospitals were prepared for the emergency challenges arising from heat waves. Medical staff were trained specially to give the required care to such patients brought to hospitals.

By doing this, Ahmedabad became the first city in South Asia to implement a successful pilot Heat Wave Action Plan.

It is known now that climate change is fuelling more intense and frequent heat waves. Many cities and also district administrations can adopt this action plan.

It needs nothing but co-ordination among several departments and groups, public awareness of the risks of extreme heat, and training of medical and community workers to prevent and respond to heat-related illnesses.

(As told to Kundan Pandey)