How to save $25 billion and more on drug costs 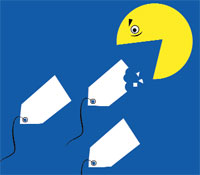 Summer has been the season of squalor and scandal for the pharmaceutical industry worldwide. For India, it was the disgrace of Ranbaxy’s improperly manufactured drugs and fraudulent practices, charges that it settled by paying a $500 million fine to the US Food and Drug Administration. That was in May. A month later, both the European Union and the US took action against drug companies that had entered into unethical pay-for-delay deals to keep low-cost generic versions of their medicines out of the market on both sides of the Atlantic.

In the second instance, the European Commission fined Lundbeck of Denmark and its generic colluders €146 million or $195 million. The pharma company had in 2002-03 paid companies such as Ranbaxy—yes, it figured in this case, too — and Merck KGaA of Germany to delay market entry of cheaper generic versions of a blockbuster anti-depressant called citalopram. A nasty part of this story is the revelation that the Danish company destroyed large amounts of the generic medicine. All of which put a heavier burden on Europe’s public health system.

At about the same time, the US Supreme Court ruled that innovator drug companies that pay rivals to keep generic versions of top-selling drugs out of the market can be sued by Federal Trade Commission for potential antitrust violations. A majority decision by a five-member bench of the apex court effectively reversed a lower court ruling that had found pay-for-delay agreements were legal as long as these covered just the drug’s patent term. The decision, however, did not declare these deals, also termed reverse payment agreements, illegal per se. Instead, the court instructed the lower courts to apply a “rule of reason” to these cases.

These are landmark decisions because they will result in the availability of a larger number of generic drugs in the marketplace and bring down costs—for both patients and the public health system. But there is controversy. While the public perception is that drug developers, that is the innovator companies, will now find it difficult to face the competition from generics, which can cost as little as 10 per cent of the brand name drugs, there are dissenting views. Some consumer activists believe that patent settlements are not what they are cracked up to be since some, they say, help to maintain market exclusivity for brand name drugs and thus restrict competition. However, innovator and generic firms have insisted that these settlements allow generic drugs to come to market earlier than through high-cost time-consuming legal suits over patent rights.

Now comes a study that hopes to settle the debate by putting a stunning figure to the savings that can be made in public spending on healthcare in the US through patent settlements. The just-released research conducted by the Connecticut-based IMS Institute for Healthcare Informatics shows that generic medicines that come to the market through patent settlements helped the US healthcare system to save $25.5 billion between 2005 and 2012. This is based on an analysis of just 33 molecules. IMS projects an additional saving of $61.7 billion if the current level of pricing continues through to patent expiry for each of these molecules. The other eye-opener is that, on average, these settlements helped to bring generic medicines to market 81 months sooner than patent expiry.

Generic drug makers have been encouraged to challenge patents on lucrative brand-name drugs through the 1984 Drug Price Competition and Patent Term Restoration Act, popularly known as the Hatch-Waxman Act.

Patent settlements are reached when a generic manufacturer challenges the validity of a brand’s patent and the two companies settle the litigation through an agreement based on their respective assessment of the patent’s validity and probability of a successful challenge.

The IMS study was conducted for the Generic Pharmaceutical Association (GPhA) which represents US manufacturers and distributors of finished generic pharmaceuticals and bulk pharma chemicals. “For years, opponents of pharmaceutical patent settlements have stated that settlements create a cost for consumers, the government and others. This new analysis provides the most current, complete and transparent estimate of the impact of patent settlements on health costs, and it shows that the opposite is true,” says Ralph G Neas, president and CEO of GPhA, in a press release. “In particular, the new analysis estimates that patent settlements— including those with consideration—have led to billions in savings. For example, the settlement involving Lipitor alone will save $22 billion over the next four years. This is critical for lawmakers to understand, because any further restrictions on settlements will put these savings at risk.”

While this might not clear up all the uncertainties over patent settlements, what is undeniable is the increasing market domination of generics. One straw in the wind: US drug giant Merck’s second-quarter profit for 2013 fell by half as generic competition cut into revenue from older medicines.