Hudhud gains speed and strength as it prepares for landfall

The countdown for Cyclone Hudhud’s landfall between Visakhapatnam (Vizag) and Srikakulam in Andhra Pradesh is now in the final phase. With each passing hour, intensity of Hudhud is increasing and with every increase, the threat to Andhra Pradesh coastal areas is also increasing. From the past Category 1 strength, cyclone Hudhud intensified to Category 2 strength by Saturday morning, by afternoon it had intensified into Category 3 cyclone. At 11.30 am today, Hudhud was 260 km south-east of Vizag, according to the update by India Meteorological Department (IMD). The maximum sustained wind speed as per US’ Joint Typhoon Warning Centre (JTWC)  latest update is 105 knot (close to 194 km/hr), gusting at 130 knot (close to 240 kmph). 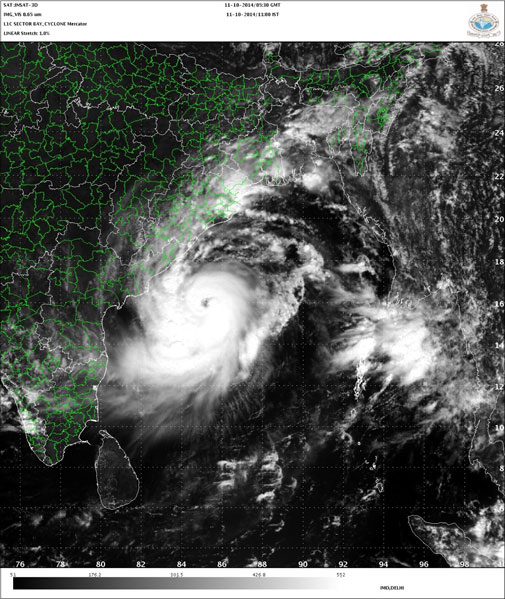 And for the first time, the eye of the cyclone has emerged (15 km wide), indicating an intensification of the cyclone. The cyclone is so gigantic that its core region (the central white part around which we see rain bands) is comparable to the size of Sri Lanka (north to south) and the entire cyclone structure is half the size of India.

As per the latest Dvorak Number ( Dovrak Technique is used for estimating cyclone’s intensity based on its appearance in infrared or visible satellite images), Hudhud has a current intensity (CI) number of 5.5 which corresponds to a maximum sustained wind of 102 knot (close to presently estimated 105 knot).  This wind speed corresponds to Category 3 status on the Saffir Simpson Scale, used for classifying cyclone.

Cyclone Hudhud continues to experience favourable conditions for intensification. The inhale-exhale of warm, moist air has significantly improved now, which should greatly boost the intensification. Already, fresh intense thunderstorms are forming as can be seen in the above image. At the moment Hudhud has moved out of any moderate or strong vertical wind shears.

Cyclone Hudhud is moving north-westward at a speed of 6 knot, close to 10km/hr since the last few hours.

Hudhud is likely to intensify further today and it will likely reach close to Category 4 strength by Saturday night—maximum winds should touch close to 115 knot (213km/hr), gusting to be 260 kmph.

Many trains operating in Vizag-Bhubaneswar sector (which were scheduled on October 11 and 12) have been cancelled. Flights to and from Vizag airport will also be affected from today afternoon. A few flights that were scheduled this evening have been already cancelled.

Landfall region of Hudhud remains between Vizag and Srikakulam, between the morning and afternoon hours of Sunday, October. People should keep away from the beaches as storm surge  of 1 to 2 metres height can be epected as the landfall time nears.

Here is what the people living in the cyclone path in Andhra Pradesh (Vizag,Srikakulam and around) should keep in mind. (Inputs from Bureau of Meteorology,Australia)

On warning for local evacuation

When the cyclone strikes

Hudhud Hudhud Down to earth Cyclone Cyclone
SUPPORT US