Hudhud strikes, what happens next?

On the first anniversary of Cyclone Phailin, Cyclone Hudhud made a landfall on Sunday near Visakhapatnam (Vizag) around 11 am. In an update given by US’ Joint Typhoon Warning Centre (JTWC), maximum wind speed of Cyclone Hudhud at 11.30 am (during the landfall) was 115 knot (close to 213km/hr) and gusting to 140 knot (around 260km/hr). The official report from India Meteorological Department will be out soon but initial estimates suggest that wind speed recorded in Vizag touched as high as 190km/hr during the landfall period.

The latest satellite image suggests that the eyewall (portion of strongest rains and winds) is exiting the coastal areas—it is eroding and moving inwards and, hence, the conditions along coastal Andhra Pradesh and coastal Odisha will be improving Sunday evening onwards although rainfall will continue till Monday, causing large-scale flooding in affected areas of Andhra Pradesh and Odisha. 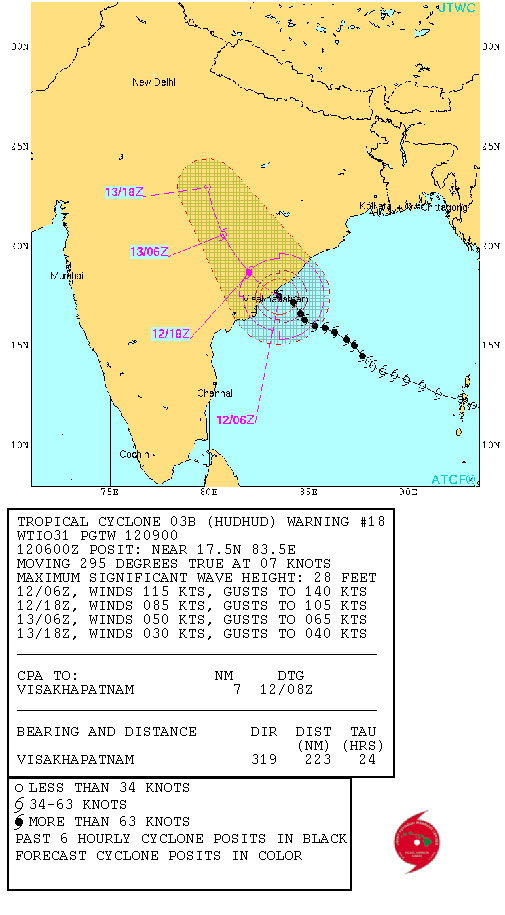 Cyclone Hudhud would have started weakening now as it has exited the sea and is interacting with land. The projected path of Hudhud will be north-west, which will take it (its core) through areas like Chattisgarh, eastern parts of Maharashtra and eastern Madhya Pradesh, where it will die out—it will no longer be strong enough to be classified on the scale.

Rainfall and strong winds will spread in eastern Maharashtra (Vidarbha) on Monday. Good amount of rainfall along with powerful winds (able to damage some trees, power lines) will be experienced on Monday in the region. 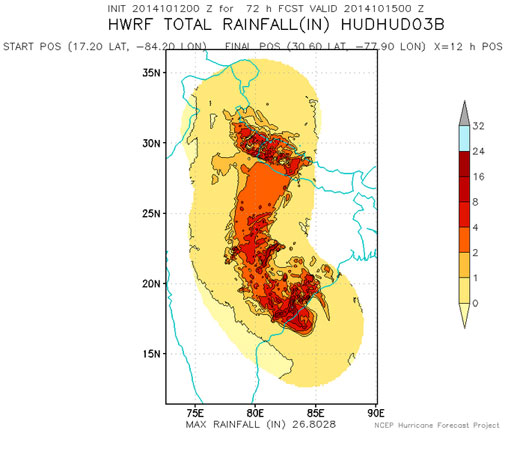 The Hurricane Weather Research and Forecasting (HWRF) model, which had forecast the intensity of Hudhud very correctly, has given estimates of how much rainfall can be expected along the path of weakened system Hudhud—along with Chattisgarh and eastern Maharashtra, the eastern half of Madhya Pradesh will also get heavy rains (model forecasts up to 100 mm rains in total) till Wednesday, October 15. Western Uttar Pradesh will also get heavy rains (up to 50mm as per the model) from later hours briefly on Tuesday.

Chances of heavy rains and subsequent landslides seem to be rising for western half of Nepal on Tuesday, October 14. Weather models are indicating a western disturbance approaching India (should be to the west of Jammu and Kashmir on this day as per the present model). The timings of the western disturbance and the remnants of cyclone Hudhud are being monitored to see how adversely that can affect western Nepal, and possibly Uttarakhand as HWRF model has been consistently indicating heavy rains here. Hence, people in Uttarakhand must follow weather updates on this.

Hudhud effects (rains and winds) will completely dissipate in India from Wednesday, October 15, 2014.