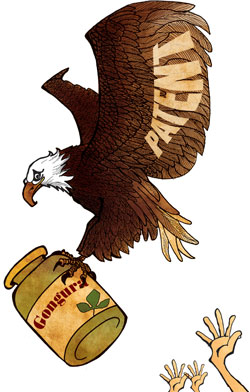 If there is a quintessential Andhra dish, it is gongura. This is a sour, leafy plant—usually described as sorrel (hibiscus sabdariffa) and sometimes as roselle—that is added to traditional dishes of the Andhra cuisine to give these an unmatched zing. So you have gongura with dal or gongura with meat and chicken, although the most popular item remains the gongurapickle that is available in supermarkets across the country.

I am a gongura aficionado, having been introduced to its distinctive sour taste many decades ago during a brief sojourn in Guntur district, which reputedly produces the best leaves. I’ve had it cooked with the best known Andhra dishes, and eaten it in homes, restaurants and dhabas. It is every Andhra housewife’s stock in trade, and no canteen or restaurant serving “Andhra meals” will hire a cook who does not know his or her gongurain all its variations. Such is the addiction of fans that an enterprising company in a small town in West Godavari district has been selling bottles of chicken gongura pickle at a bargain Rs 150 for 500 grams. So why, and how, could someone seek a patent on a tried-and-tested pickle recipe?

Here’s the shocker: the patent has been sought by none other than a group of scientists of the Indian Council of Agricultural Research (ICAR)—all of them working at the National Research Centre on Meat (NRCM) in Hyderabad. The lead scientist in the group of six who claimed to have developed “a process for preparation of chicken gongura pickle and chicken soup from deboned chicken frames” is B M Naveena, who was awarded the LalBahadurShastri Outstanding Young Scientist Award-2013 in July this year. In his application for the award, Naveena had claimed to have four published patents to his credit, one being for the ubiquitous chicken gongura pickle.

Although Naveena refused to tell Down To Earth why his process was patent-worthy, he is on record as saying, “Traditionally, people make gongura pickle or chicken pickle. Ours is chicken gongura pickle with a specific process involving at least eight steps. It is made without the use of vinegar, citric acid or lemon. That is the difference.” All of which should make any gongura lover bristle. The leaf is so sour that none of these ingredients is ever used in the making of any dish based on this leaf.

Reacting to Naveena’s claim, a well-known patent expert had noted that the combination of chicken and gongura was “a mere aggregation” and cannot be the basis for a patent claim.

For a column that has been looking on and off at scientific frauds in the country, there is a despairing sense of déjà vu in the chicken-gongura story. Not so much in the absurdity of the patent claim as in the fudging that is apparent. The fact is that no such patent has been awarded yet, or is likely to be. A search of the Indian Patent Office records reveals that Naveena’s claim is yet to be examined and that an opposition to the patent has also been filed.

The fudging is in the use of “published patents” by NRCM and Naveena. In their dictionary, it appears to mean that the patent office has published their claim. As Naveena told Down To Earth: “I have four published patents… The novelty and merit of these patents can be challenged by anyone once they go for examination.” ICAR, on the other hand, assumes—just as we all do—that these patents have been awarded to Naveena. Its citation states that the NRCM senior scientist’s “patented work” has “huge demand” and that “many of these technologies (more on these later) have been commercialised to small- and medium-scale entrepreneurs with great success”. 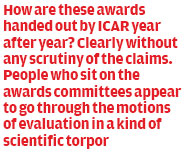 ICAR’s tendency to confer its most prestigious awards to scientists with a lively imagination—and secure patronage—is well known. A few years ago, ICAR awarded its top prize, the prestigious Rafi Ahmed Kidwai Award, for outstanding research in agricultural science to K C Bansal based on his imaginary claim that he had “filed three patents for novel gene discovery”. It turned out that Bansal, a senior scientist of the Indian Agriculture Research Institute, India’s premier institute for research and education, who at the time was heading a crucial project on transgenic crops at the National Research Centre (NRC) on Plant Biotechnology, had done nothing of the kind (see “The Maya of Indian Science,” Down To Earth, December 16-31, 2012).

How are these awards handed out by ICAR year after year? Clearly without any scrutiny of the claims and without even a cursory look at the work that is being promoted by the institutions. The scientists who sit on the awards committees appear to go through the motions of appraisal and evaluation in a kind of scientific torpor with little interest in seeking out merit, much less outstanding work.

Sadder still is the cronyism and unethical practices that are undermining ICAR’s attempt to tone up the working of its close to 100 institutes. In recent years, it has launched a concerted drive to commercialise the research of 4,800 scientists in its institutes through a policy of rewarding intellectual property rights (IPRs). Not only does ICAR fund the tedious and expensive process of seeking patents by its scientists, it always awards marks (2-3) to those scientists who hold patents or have been able to commercialise their work. This is a major incentive when prized research projects are being handed out and more so when appointments to plum posts are considered.

In the 11th Plan, a separate fund of Rs 49 crore was earmarked to promote IPRs and ICAR has been passing this on to its top institutes, of which the 17 NRCs constitute the cream. Under the guidelines issued by ICAR, its research institutes have the autonomy to decide which output qualifies for patents once they go through the due processes. To start with, research findings have to be submitted to the Institute Research Committee, Research Advisory Committee and the Quinquennual Review Team to evaluate the authenticity and novelty of the work. Only after approval by these committees can any work be published or submitted for patenting to the consultancy processing cell of the institute, which will then verify and forward it to the Institute Technology Management Committee. This committee will get the application ratified by the Project Monitoring and Evaluation Committee.

This begs the question: how are claims such as Naveena’s thought fit for patenting? Another of the patents that Naveena along with other NRCM scientists has sought is a process for improving the shelf life of meat through what they call innovative super-chilling technology. Experts say it is a process that has long been in use in the meat and fish processing industry the world over. The claim they make is for “an innovative super-chilling (storage at -1°C) and vacuum packaging process for buffalo meat steaks and mutton chunks which significantly improves the shelf life up to three months without freezing compared to 30 days and 4 days at refrigeration temperature under vacuum and aerobic packaging conditions respectively”.

NRCM is doubly guilty since it published in its annual reports the details of both the chicken gongura pickling method and the super-chilling technology that its scientists “invented”. As anyone familiar with patent laws knows, this makes whatever claims NRCM scientists are making “prior art”, which means that which is already known. In other words, NRCM has landed itself in a pretty pickle.