If only ‘jal manthans’ could secure our water supply 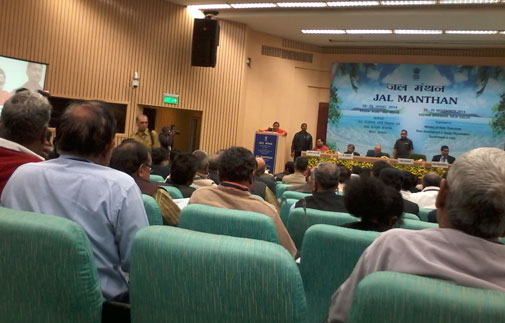 The Ministry of Water Resources, River Development and Ganga Rejuvenation on November 20 to 22 hosted a Jal Manthan, a meeting to chalk out strategies for better development and management of the country’s water resources. The meeting was organised in the same format as Ganga Manthan, another meeting held in July this year to save the Ganga. All the stakeholders were invited for sharing their ideas. The first two days were strictly for government representatives, while the last day was open to the civil societies, grassroots activists, researchers and communities. I got a chance to participate in Jal Manthan on the third day. The respected minister, Ms Uma Bharti, seemed to be full of energy and determined to solve the water crisis.

There were four sub-themes for the meeting—water security, human face to water resources project, farm water management and rejuvenation of water bodies. I preferred to join the last group to know about actions on the ground for saving the Ganga. This group did not fix the topic of discussion, like the other groups, and, instead, planned to conduct an open discussion. I could recognise quite a few faces in the room. Most of the NGO representatives and environmentalists present at the meeting had participated in the Ganga Manthan.

They were deliberating the same points discussed during Ganga Manthan, and repeating the same suggestions. There were only two participants who explained about their initiatives in saving a river in Punjab and a water body near Pune through community involvement.

I saw Ms. Bharti moving from one hall to the other to oversee the proceedings of the meetings; she was spending 10 to 15 minutes in each room, scribbling a few points and instructing  officers to contact certain people of a particular group. The energy of the minister was really appreciable. But I was just wondering why the action points discussed in the Ganga Manthan was taking so long to be implemented when we have such an enthusiastic minister.

After lunch break, I joined the group discussing water security—I found the same story here; people were just giving out the old solutions. I joined the group discussing farm water management, and discovered the same suggestions being delivered there as well. I then entered the hall where a group was discussing human face to water resources project. The theme appeared interesting. To my surprise, I found only 10 people in that hall. Three of them were chairs and co-chairs. The chair helplessly kept requesting the participants to discuss the topic assigned to their group. He seemed quite upset about the fact that he did not have any action point to present to the minister. This group was supposed to discuss a topic on river supported tourism, which created confusion—everybody was discussing against the topic. The participants opined that tourism adds pollution to the river ecosystem. The chair was embarrassed by the reaction of the participants.

The last session was for compiling all the action points. First came the action points from the group discussing water security and then came in action points from all the other groups. All the suggestions that came up were old and, in one case, very weak—even the audience was upset about this and vocally protested. I could not understand what the outcome of this gathering was.
Even when the minister came up to speak—she in her usual style praised Prime Minister Shri Narendra Modi, his efficiency, his energy and his style of work. Ms. Bharti also announced that the government will promote Sanskrit as official language. At last, she came to the topic of the meeting.  Ms. Bharti said that her ministry will implement the action points within two years. She declared the next year will be water conservation year. One week will be celebrated as water week where all the villages will be reached to promote humara zilla, humara jal (Our village, our water). A jal gram (water village) will also be developed as pilot project. Very impressive indeed!

Meanwhile, the conference note of the previous Ganga Manthan was released. I quickly flipped through the pages. The note said that the present government is completely focused to conserve the river Ganga. Great! But when?

Ms Bharti promised for another stakeholder meeting next year and a note of the Jal Manthan to be published. Action points that are being compiled and documented are old and discussed several times in the last decade. We are still waiting for the implementation phase—the new government says they will implement them. The ideas discussed were already there. So why do we need these meetings to compile them again and again. We surely need implementation and not another meeting. All of us are still waiting for acchhe din.