If only we'd listened to Kosambi 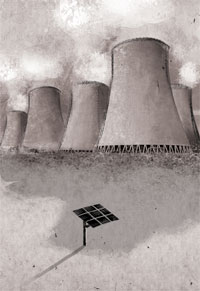 SOMETIMES, the consequences of the choices that we make as individuals, communities and nations live with us forever. One such is solar energy. India is still paying heavily for the choice it made in the 1950s and 1960s to opt for nuclear power instead of solar, a choice shaped by the grand ambitions of Jawaharlal Nehru’s elitist scientists and a general inability to understand where a poor country’s energy requirements lay.

This conflict was personified in the clash between nuclear scientist Homi Bhabha and the brilliant polymath Damodar Dharmananda Kosambi, or D D Kosambi, while both were at the Tata Institute of Fundamental Research (TIFR) in Mumbai. While Bhabha, close to Nehru, got his way with funds and facilities, Kosambi, mathematician extraordinaire, historian and much else, was unable to persuade the scientific establishment that solar energy was the best bet for India.

His arguments were commonsensical. Solar was plentiful and it would be a more democratic energy solution in a country where not all parts could be connected to the power grid. In a simple speech more than half a century ago, Kosambi explained that the biggest advantage would be decentralisation. With solar energy, power could be supplied locally, with or without a grid, and it would be the most efficient source of energy for dispersed small industries without the “stifling effects of bureaucracy and heavy initial investment”.

Besides, there were significant other benefits which only Kosambi could have visualised. “Take the simple problem of reforestation, which alone can change India’s agriculture, preserve her rapidly eroding soil and increase production. This problem is insoluble unless people have cheap fuel for cooking, so that they need not cut down trees.” No scientist of that era had the foresight to connect these problems.

And as he predicted, nuclear energy has got us nowhere, accounting for less than three per cent of the installed capacity and even less of the power supplied despite gargantuan investment. Meanwhile, our attempts to push solar energy despite two programmes in mission mode have not got India very far, stymied as it is in bureaucratic quagmires, poor funding and above all, from want of political vision.

I was reminded of Kosambi’s passionate advocacy of solar energy when two news items caught my eye last fortnight just as the world’s biggest polluters, the US and China, announced their so-called “historic” agreement on cutting carbon emissions. These unrelated news reports were about the tremendous strides the two nations are making on solar energy.

China’s renewable energy programme is without doubt the most ambitious and its focus on solar has pushed it to the top of the league, second only to Germany, the clear leader. According to a Bloomberg report, China is scheduled to install as much as 8 GW (gigawatts) of small solar systems this year, a 10-fold increase over 2013 when it had close to 20 GW of solar capacity—“a figure comparable to about 20 nuclear reactors”. Most of the solar farms are in remote locations and the focus is on promoting smaller systems closer to where they are needed, exactly what Kosambi had proposed.

The other report in Mother Jones was an eye-opener, too. It said the US was in the midst of a solar boom with new installations growing by an average 66 per cent since the 2000s, and outpacing all other energy sources. Apparently, the carbon savings from the current solar panels is the equivalent of emissions from 3.5 million cars.

Unlike these countries, India has done very little R&D on solar and has just 2,600 MW of installed capacity and a soaring hope—of setting up 22 GW by 2022. If only we had listened to Kosambi.