Are the new industrial siting rules a boon or a bane? 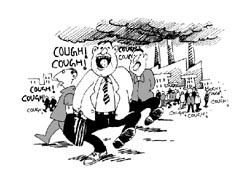 the Union ministry of environment and forests ( mef ) has recently circulated draft rules on industry siting, a decade - and-a-half after the guidelines were first formulated. Choice of industrial sites has caused more conflict, between project proponents and the local people who will be potentially affected, than any other environmental issue. If the draft becomes a law, the rules will heighten this conflict.

Industry contributes to economic growth - not necessarily equitably - but, among other things, it also degrades the environment, poses health risks and alters landuse. Mumbai and Kanpur are bustling centres for industry and trade today. But they are also congested and polluted. The Bhopal gas disaster's high toll was because the Union Carbide Corporation decided to locate its plant at the edge of the city, rather than away from it. Until three decades ago, Dalli was a little known town in Durg district's tribal area. Iron ore mining turned it into a boom town, but also caused rapid depletion of the surrounding dense teak forests.

Site choices have an economic logic. Minimising transport costs is the single-most important factor to influence industry siting. Kalyani Steels, for example, wanted to locate their new coke oven plant near Mangalore as the port there can handle the 2.5 million tonnes of coal the plant will import, which other Karnataka ports cannot. Their next choice was Ramnagar, one km from Karnataka's rich Western Ghat forests and close to the Goa border.

Why Ramnagar? Because the Vasco port in Goa is close by and so are the coke-consuming steel plants in northern Karnataka and southern Maharashtra. The nearby Supa reservoir will provide water and the rail and roadheads at Ramnagar are convenient for coal and coke movement. Finally, a Karnataka site provides Kalyani Steels better tax breaks. It makes good sense for Kalyani Steels to want to locate at Ramnagar. But for the people and the forests, it doesn't.

For decades now, infrastructure development and industry departments have helped industry select sites. Industrial estates have come up close to sources of raw material and markets and where there is power, water, a transport head, cheap labour and upstream or downstream industries. But, as in Kalyani's case, the cost of the impact on the environment, people's health and livelihood - even if they can be computed - are left out of the economic equation used for site selection.
Nine months after the Bhopal tragedy, mef published the first industry siting guidelines. Essentially, the guidelines prescribe that industries should be located at least 25 km away from ecologically sensitive areas and towns with populations over 300,000, and half-a-kilometre from coastal areas, flood plains, riverine systems, highways and railway lines. The guidelines were not mandatory, they were never implemented seriously.

In the last decade, there has been a substantial increase in the number of instances where site choices have led to conflicts. Birla Periclase's calcite mines and approach road through thick Eastern Ghat forests and Dupont's N6,6 plant in the agricultural areas of Goa are some of the cases that come to mind readily. Industrialists saw these sites as economically beneficial, but the local people saw them as 'unwanted neighbours' who would dirty their surroundings and affect their livelihood.

The Cogentrix power plant in Dakshin Kannada ( dk ) district in coastal Karnataka is the best example in recent times of bad siting leading to conflict. Popular groundswell against the proposed site has stalled plant construction for years. The Karnataka government argues that dk district is industrially underdeveloped and hence needs power plants and other industries. The people counter this by saying: "The bulk of the power is for Bangalore, Karnataka's load centre, so why put power plants in this ecologically-rich district? Besides, dk district is ahead of the rest of Karnataka in every respect of human development. Polluting industries will only deteriorate the quality of life here." The reason for siting Cogentrix in dk district is its proximity to Mangalore port, which significantly cuts costs of hauling coal.

Sensing the gathering storm over industry siting, mef has recently circulated draft rules, the main provisions of which are:

- 15 industries, for instance, refineries and petrochemical plants cannot be located in urban areas and within 25 km of sanctuaries, national parks, biospheres and metro cities, and 7 km from notified wetlands and half a kilometre from highways and rail lines;

- 10 industries cannot be sited within 7 km of notified archaeological monuments.


The draft rules, though well intentioned, are fraught with many problems. First, is the exclusion of many highly polluting and hazardous facilities - for instance, power plants, nuclear reactors, chemical storages - from the list of industries for which distance criteria apply.

Second, the draft rules do not provide for a 'no-development zone' around drinking water reservoirs for cities to prevent their contamination. The Hussain Sagar Lake in Hyderabad, once a drinking water source, has been contaminated by effluents from industry located 15 km away.

Third, the draft rules are based on the underlying assumption that the impact of pollutants wanes with distance from the source. This is not always valid. Tanker trucks carrying hazardous chemicals, for instance, have been involved in serious accidents many miles away from cargo filling points.

Fourth, the draft rules beg the question: "What is the scientific basis for specifying 25 and 7 km?" With 15 years of experience of doing environmental impact assessment ( eia ) studies (the first guidelines appeared in 1985), there should be adequate data to say, for example, that a cement plant has a credible impact range of 10 km. On the other hand, it may be a few hundred kilometres for nuclear reactors, as was the case in the Chernobyl accident.

Lastly, and most importantly, the 25-km-from-metro-cities rule discriminates against people living in non-metros. It implies that people in smaller habitats can be subjected to greater pollution loads from industry as they have a lower incidence of pollution-related health effects. Where is the epidemiological evidence for this?

The 1999 draft siting rules are a watered down version of the 1985 guidelines, though they will become mandatory only when notified. They were fatally flawed, ab initio , as they distribute risks unevenly across society, a sure recipe for strife.

Good siting regulations act as a 'no go' gate for bad sites and the results show. The many cement plants in Telangana and northern Karnataka, located mostly in rocky and scrub areas, have had little adverse impact on their surroundings.

There is yet another good reason for choosing good sites at the outset. Once a facility comes up on a bad site, it is difficult to do anything about it. A Madhya Pradesh minister's statement, months before the Bhopal gas disaster, illustrates the mindset of policymakers. To a suggestion that the Carbide plant posed a threat to Bhopal, the minister said that the plant was not a pebble which can be picked up easily and placed elsewhere.

Distance between pollution sources and receptors, the pre-eminent criteria used by the draft rules, is not very satisfactory for protecting either the environment or people's health. Four additional measures for improving siting regulations are required.

Siting rules should be based on risk standards. These standards require that risk be below the specified limits for all persons. Further, all hazardous facilities, regardless of mention in the rules, will be covered by the risk standards. If cumulative risk in an area is close to the limit, additional facilities which increase risk would be barred.

It is necessary to define criteria for ecologically-sensitive areas ( esa s). Areas that meet the criteria must then be notified as esa s. One such area would be the Western Ghats and a buffer area around them. Human activity in esa s should be suitably regulated, including exclusion of polluting and hazardous industries. Apart from protecting India's rich but threatened biodiversity, the demarcations of esa s will also minimise the chances of selecting sites such as Ramnagar and the consequent conflict.

Environmentally-suitable industrial sites, with low potential impacts, should be identified on a war-footing in every state so that they can be offered to project proponents as and when they wish to set up industries. Hitech industry zoning maps for about 30 of India's 549 districts have been under preparation for several years. However, progress has been slow, and maps for only seven districts are now available. Simpler maps can be prepared quickly to help industry siting.

Site clearance can be made more effective and faster if environmental clearances are done in two stages rather than in a single stage, as is done now. Current procedures require eia and risk analysis studies to be submitted for 29 categories of industries before a site is considered for environmental clearance. These studies do not come cheap and Indian industry is generally loathe to spend on such 'unproductive' items. Invariably, project proponents submit only one site for consideration and this puts environmental clearance committees under pressure to clear that site.

Democratising environmental management will also help siting. Environmental issues are far too complex for a single stakeholder to tackle. There is, then, a strong case for government to become more transparent and for environmental decisions to become more decentralised and participatory. Accordingly, two steps should be taken immediately regarding industry siting.

All environmental documents, other than those which affect the nation's security and patent laws, should be brought into the public domain. Public watchdog efforts will do the rest.

The case of the proposed barge-mounted power plant in the Tadri estuary illustrates this well. In the public hearing for the site, the eia study for the project was asked for and obtained by the local people. The study failed to mention or assess the impact of oil spills on the salt pans, prawn farms, shell fish and the rich mangroves in the estuary. Instead, the eia study referred to "coral reefs and snow ( sic )", neither of which occur at Tadri.

An independent appraisal estimated that the plant would affect 2,000 families dependent on the Tadri estuary for their livelihood and cause an annual revenue loss of Rs 40 crore (excluding environmental costs) to the local economy, but only add a tenth of that as revenue gain. A few months after the Tadri eia study was made public, the project proponents withdrew from the site.

While there is no legal bar on having project-affected persons attend environmental clearance meetings of regulating agencies, this is not currently the general practice. Environmental clearance regulations should be amended to specifically allow for all stakeholders to participate as equals at every stage of environmental clearance. This will throw more light on the specifics of sites under consideration and develop consensus amongst stakeholders regarding good and bad sites and also how to conduct post-project environmental management at the sites. The beginnings of this process can be seen in satisfactorily held public hearings for proposed projects.

The author is with the Cerana Foundation, Hyderabad