Despite international regulations and campaigning by environmentalists, hazardous waste continues to be dumped in India 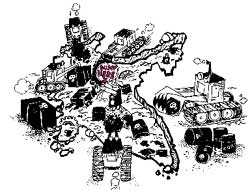 "we are becoming the waste destination of the world," said a senior Indian custom official at a high-level meeting held recently on the issue of hazardous waste imports by India. The comment highlighted the helplessness of those who are meant to protect India from waste imports from its porous 7,500-km coastline. Even as officials in the ministry of environment and forests (mef) dither and fumble in their commitment to the Basel Convention and environmentalists celebrate their victory in obtaining a blanket hazardous wastes import ban from the Supreme Court of India, it seems to be 'business as usual' for waste importers.

Lead ash, battery scrap, zinc ash, waste oil and even old ships laden with toxic Polychlorinated biphenyls (pcbs) and asbestos are being dumped in India.The country imports over 70,000 metric tonnes of zinc waste and 50,000 metric tonnes of lead waste (1995 figures) through its seven major and over small 100 ports. Import data from other ports are almost impossible to obtain, since almost none of them are computerised. Moreover, custom clearances can be obtained from over 1,000 customs depots scattered throughout the country, each manned by a few clearing officials having to deal with over 100 assorted consignments every day. Although the Union government claims that the situation is under control, the ground reality is quite different.

Regulating hazardous waste is not easy. And if the commitment to do so is lacking, then the task is an impossible one. On paper, India was probably one of the first countries to legislate hazardous waste import rules as early as in 1989 - after it supported a g 77 move to initiate the Basel Convention. But little was done thereafter. Till 1995, these rules did not reflect in the import rules. Later, when they did show up in the import regulations, they were not defined. Although categories of hazardous wastes have been defined, guidelines to determine their hazardous nature are absent. The import rules lay down a detailed prior informed consent (pic) procedure to be followed by the exporter or the exporting country. However, till date, not a single pic has been filed. The mef has authorised only seven importers for fixed-quantity imports, but over 150 have been importing regularly. Greenpeace campaigner Nityanand Jairaman found that even a year after the Delhi High Court banned the import of hazardous wastes, most ports were not aware of the ban.

The waste industry has been lobbying to make a case against India ratifying the Basel Convention in the forthcoming Conference of Parties (cop iv), to be held in Malaysia in February this year. Consequently, the government has been speaking with a forked tongue. While the mef has publicly assured environmental groups of their commitment to ratify the Basel Convention, the Planning Commission, the highest body which advises the prime minister on policy issues, recently issued press statements that the Basel Convention was discriminatory to India and must not be ratified. For the Planning Commission to issue statements on specific issues is extremely rare and unusual. In October 1997, the Confederation of Indian Industries, influenced by the waste processing industry, urged the government not to ratify the Basel Convention. Some business dailies published editorials condemning environmentalists for opposing the import of 'valuable' waste and called them as 'international conspirators'.

Cheap labour, poor environmental standards, a sieve-like import regime, and a growing market for cheap raw material are responsible for India becoming a haven for dumping waste. Custom authorities admit that once a consignment lands on Indian shores, the issue of legality becomes a theore-tical one. There is no provision under the Indian law for the consignment to be returned to the sender. Delhi - one of the over 1,000 such warehousing locations - has currently 108 containers of hazardous wastes lying unclaimed. Alang in Gujarat has become the world's largest yard for breaking old imported ships. Casualty: one reported worker death per day. Of course, heading the exporters list for all wastes is the richest and largest non-party to the Basel Convention - the us.

India is one of the 118 signatories to the Basel Convention. Its workers, caught between choices of starvation and a toxic death, toil in completely unprotected conditions for less than a dollar a day. There is no reason why they must pay the price for the country's development, while a powerful industry - supported by an uncaring government - laughs its way to the bank.

Ravi Agarwal is with Shristi , a non-governmental organisation