In urging free import of zinc ash, which is often contaminated, Planning Commission member G Thimmiah has shown scant respect for the environment 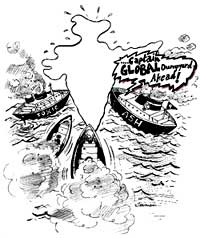 recent reports that Planning Commission member G Thimmiah has recommended free import of zinc ash are disturbing. The Planning Commission is a political advisory body, whose task is to formulate plans for self-reliance, poverty eradication, employment generation and the like. It lacks constitutional or statutory status. However, since the prime minister heads the body, with senior politicians as deputies, it wields immense clout in the political decision-making process.

Lobbying by a member of the panel for free import of zinc ash raises critical questions. First, is the right to a clean environment secondary to meeting economic objectives? Second, is lobbying for industry one of the duties of a member of the commission? Thimmiah admitted that the panel had been approa-ched by the Secondary Zinc Manufacturers' Association.

Increasing instances of dumping of hazardous wastes by industrialised countries in third world countries led to the adoption of the Basel Convention on the Control of Trans-boundary Movements of Hazardous Wastes and their Disposal, or 'the Basel Convention'. Zinc ash comes under 'zinc compounds', which are listed in Annex 1(y 23) of the convention. The ash, contaminated with heavy metals like lead and cadmium, is a health and environmental hazard. India has neither the infrastructure to monitor levels of heavy metals, nor the facilities to separate contaminated from uncontaminated ash. Its free import, therefore, only serves business interests.

It has been argued that the cost of recovery of zinc from zinc ash is lower than the corresponding costs in industrialized countries. This is true. But this 'saving' is at the expense of the environment, and at the cost of the health of workers.

More importantly, Thimmiah's statement comes at a time when the matter is sub-judice and being examined by the Union government. In fact, both the Supreme Court (sc) and the Delhi High Court had issued injunctions prohibiting import of hazardous wastes. Acting on the directions of the sc , the ministry of environment and forests constituted a high-power committee chaired by M G K Menon to enquire into the issue. The committee was asked to examine to what extent hazardous wastes listed in the Basel Convention have been banned in India; and to investigate how much and what type of hazardous waste stocks are lying at docks and ports. The committee will recommend mechanisms for disposal of/re-export of such waste.

The term of office of a Planning Commission is the same as that of the government. If a government is reduced to being a caretaker, the panel likewise assumes that status. And a caretaker government or its advisory body cannot make any policy recommendations.

Thimmiah terms the Basel Convention "discriminatory to developing countries". On the contrary, it was adopted following strong pressure on the global community by developing countries and is meant to help the South. On April 17, 1997, Union minister for environment and forests Saifuddin Soz in a public message to a delegation of ngos said had said that India "will not accept hazardous wastes from industrialized countries". The industry's argument that the Basel Convention is discriminatory flows from a misinterpretation of 'the Basel Ban', prohibiting export of hazardous wastes from the Organisation for Economic Cooperation and Development (oecd , which groups the industrialised countries) to non- oecd (developing) countries. This is not discriminatory. Rather, it ensures that the industrialised nations dispose of hazardous wastes generated by them at their own cost, and do not take the easy way out by exporting it to developing countries, where environmental norms and their enforcement are weak.

The opposition by environmental groups in the country is not against import of uncontaminated and non-hazardous ash, but against import of hazardous waste in the garb of zinc ash. It would be more prudent to demand that consignments of zinc ash clearly specify and testify the nature and contents of the material exported. This should be done by the exporting country and at the exporter's cost.