The uncertainty over the health impacts of radiofrequency (RF) radiations from mobile towers is far from over. The Department of Telecommunications (DoT) has framed advisory guidelines to states on issuing clearance for installation of mobile towers. The guidelines that became effective from August 1, 2013, are expected to be the basis of mobile tower regulations in states. They were finalised in consultation with state representatives and stakeholders such as industry associations. But they fail to strike a balance between facilitating the industry’s growth and exercising caution until health concerns raised by the scientific community and the public are addressed.

Considering that children and the elderly are especially vulnerable to radiations, in 2011, an inter-ministerial committee comprising representatives from relevant ministries and departments had asked for curbing the installation of mobile towers around schools, hospitals, orphanages, playgrounds and old-age homes. The guidelines do not pay heed to these directions. Health concerns raised by people across the country and judicial intervention in the matter seem to have gone unnoticed.

In case of towers on rooftops, mobile operators now require consent of only the house owner or the resident of the top floor. Nearby residents or people living in the same building will not have any say in approving the installation, even though high power radiation will affect them. Draft guidelines of the Brihanmumbai Municipal Corporation (BMC) stipulate that 70 per cent residents of an area need to approve installation of a mobile tower. The DoT guidelines are likely to dilute these provisions. 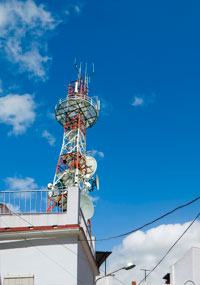 State civic bodies are deprived of the power to seal a mobile tower and disconnect its electricity in case of issues arising out of RF radiations. Complaints from residents in this respect will be addressed by the local representative of the Telecom Enforcement Resource and Monitoring (TERM) cell, possibly adding to delay in redressal.

The guidelines rely heavily on self certification by mobile operators, perhaps explained by the fact that TERM’s Delhi cell has to borrow radiation monitoring equipment from operators before monitoring radiations from a mobile tower. The industry is not burdened with creating public awareness on adverse effects of radiation and educating the consumer about best practices. The task, strangely, has been left to state governments and civil society.

The guidelines do not mention the maximum number of towers per building/area and antennas per tower, even though science explains how limiting such structures can prevent excess radiation. It would also have been comforting to see some indication on the future use of micro and pico cell towers that radiate 2-3 Watts or less compared to about 20 Watts by existing towers. This was recommended by the inter-ministerial committee. It is worth mentioning that the industry is not interested in moving to smaller towers because it will have to make additional investment.

RF radiation from an antenna on a mobile tower is the highest in its horizontal beam and the antennas are typically tilted downwards by few degrees. To prevent reflection of this beam—which would create a hot spot of radiation just near and below the tower—there should be no structure or building parallel to the antenna. The DoT guidelines to TERM cells of states prescribe a minimum distance based on the number of antennas in the same direction on a mobile tower (see table). 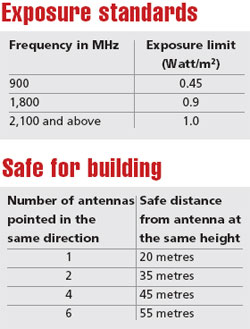 Considering there are several operators in most urban areas, even two antennas in one direction exclude the possibility of a building or a structure within 35 metres. The guidelines suggest the same safe distance for towers on the ground which is not practical along busy roads. And for towers on the rooftop, successful implementation remains doubtful. Construction of a new building or an additional floor within this distance cannot be prevented on this pretext.

It is also important to note the deficiencies and limitations of the science that influenced the RF radiation exposure limits in India. It will help us understand how the recent advisory guidelines by DoT do not suit the need of the hour. In 1998, the International Commission for Non-Ionizing Radiation Protection (ICNIRP) suggested the maximum exposure limits of RF radiations from mobile towers. In view of these guidelines, WHO advised countries to modify the exposure limits if required. In September 2012, Indian standards for RF radiation exposure from mobile towers were lowered to a tenth of the ICNIRP limits (see ‘Exposure standards’) in light of the growing body of research suggesting health impacts from the towers ranging from headaches and sleep disturbances to cancers, and public hue and cry in India.

Should we continue to base the exposure limits on ICNIRP guidelines of 1998? Or do we factor in significantly lower levels of radiations that have now been found to be linked to several diseases in other studies? The ICNIRP guidelines were largely based on review of studies on established “thermal effects” of RF radiations conducted till 1998, whereas the body of research on “non-thermal effects” of these radiations has grown considerably in the past decade. Cancers develop over time, so long-term studies capturing information of the past 10-15 years, when mobile radiations grew rapidly, are likely to provide appropriate answers.

“Interphone study” was another important research conducted by the International Agency for Research in Cancer (IARC) in 2010. The results did not link mobile phone usage of 10 years with select cancers, such as glioma and acoustic neuroma, but the study had certain methodological errors and limitations. The average user for this survey was the one who used the mobile phone for only two hours a month. Most importantly, children and adolescents were not surveyed and ailments other than cancer were not included. Effects of high power 24×7 RF radiations from mobile towers were not studied.

In 2011, WHO declared RF radiations as a “possible human carcinogen” based on the IARC study. But a few critics think this is of little relevance because RF radiations are slotted in the same category as coffee, i.e. 2B. This is a misleading criticism because the critics seem to have cherry-picked coffee, ignoring several chemicals that are also a part of the 2B category. On the contrary, considering the limitations of the IARC study, RF radiations are possibly more suited to the category that depicts greater cause-effect relationship with cancer.

Public health imperatives necessitate stricter regulations of mobile towers. Conclusive evidence is accumulating and the precautionary principle is the need of the hour. The advisory guidelines by DoT to states come across as regressive in comparison to stringent policies of some states. Small wonder, industry associations, such as the Cellular Operators Association of India, Association of Unified Telecom Service Providers of India and the Tower and Infrastructure Providers Association, have welcomed the guidelines. This would possibly lead to an unregulated growth of mobile towers. This is also disappointing because we know that several countries, such as China, Russia, Italy and Switzerland, have laws that stipulate much lower radiation limits from mobile towers.

(The guidelines can be downloaded from www.dot.gov.in)