"Inside" and "outside" stakes in wetlands 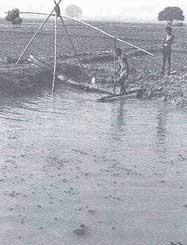 THROUGHOUT the tropics, both natural and modified wetlands are extensively exploited for a variety of biological resources. These wetlands are the creation over centuries of rural populations who have nursed and managed them with care and experience. However, increasing population pressure and rapid economic growth have led in recent decades to the degradation through overexploitation of wetland habitats.

The current emphasis on wetland management is to achieve two objectives: to conserve biotic diversity and representative habitats for their natural functions, and to maximise economic gains. Keoladeo Ghana National Park in Bharatpur near Agra -- well-known for its avifauna -- and the Lake Kolleru wetland on the east coast of India, are examples of these management objectives. But both wetlands also show that new problems have arisen that are as serious as those the management measures sought to solve.

In Keoladeo, the direct impact of people on the wetland was eliminated, while in Lake Kolleru, traditional fishing methods of the people were replaced by intensive fish-farming schemes. The problems created in wetlands by (mis) perceptions about the local people's role in sustaining wetland values, need to be studied.

Wetlands are complex ecosystems often occupying the interface between land and water. They have served humans through history and agriculture, in fact, originated in the flood-plains of rivers. Reeds and papyri from wetlands were the first materials to be used in making boats and paper. Wetlands also have been used extensively, especially in the tropics, to obtain food, feed, fiber, and to some extent, fuel. The wetlands have provided the local people with fish and ducks and a disposal site of their wastes. No wonder then that more than half of the world's population still depends for food on modified and intensively managed wetlands.

Though large areas of natural wetlands worldwide have been lost because of drainage or land-fills or degraded severely by human activity, the value of these wetlands and their functions are being rediscovered. The Ramsar Convention (IUCN, 1971) highlighted their importance as habitats for wildlife, especially waterfowl, and called for conservation of internationally important wetlands (check). Since then (when?), much effort has gone into understanding wetlands and the realising of the importance of their conservation and management throughout the world.

Wetlands support a large diversity of biota, many of which are economically important to mankind. They also perform many important ecological and aesthetic functions, such as trapping silt and nutrients and regulating water flow.

Wetlands considered valuable for recreation or maintaining biotic diversity cannot be used for wastewater treatment as the two functions are not compatible.Similarly, attempting to maximise gains from a wetland for exploitation of plants and fish, will necessarily alter its natural functions and values. It is important to understand the ecosystem processes of a wetland and the factors that are responsible for maintaining the characteristics that impart particular values to it. It is essential also to understand the adverse impact on the wetland from overexploitation and from such specific management activities as artificial regulation of water levels, manipulation of structure through introduction of plant and animal species and grazing.
It is only in recent years that overexploitation for greater economic returns has caused much damage to wetlands. As there are a number of groups with varied interests in wetlands, each group has a different role to play. Some wetland resource users are either not concerned or are unaware of the factors that ensure the supply of resources. There are decision makers, consultants, advisors and professional managers whose perceptions, objectives, approaches and priorities differ widely from those people directly concerned and dependent on wetlands.

It is the latter group of "inside" people that deserves greater management attention than the "outside" people. It is, however, these "inside" people, whose livelihood depends on wetlands, who are being blamed for all the woes of the wetlands. They are kept out of their wetland homes to facilitate economic exploitation or for conservation of biotic diversity and representative habitats. The question that arises is: Can the wetlands be managed without these people?

Brij Gopal is a fellow at Jawaharlal Nehru University.