Sexagenarian Mohammad Shabbir, a resident of Kondapur village in Andhra Pradesh's Medak district, is always wary of visitors. “Your Arogyashri people are playing tricks on me,” he tells me, his voice sounding anxious. “They first asked for Rs 2,000, and when I sent it, they started sending me all sorts of stuff. First they sent me glass slides from the hospital, then they started sending me books!” Arogyashri refers to the state-sponsored health insurance scheme, which offers an annual cover of up to Rs 2 lakh per family.

When Shabbir’s son brings out the bag containing the “books”, they turn out to be copies of the popular magazine, Readers’ Digest. The “glass slides” turn out to be a set of designer glass coasters—probably a free gift with a subscription. The “papers” are more junk mail from the same source.

Confusion follows. What letter did he reply to, and to whom did he pay money?  “While being treated under Arogyashri, I had been told I will receive a letter. When this letter in English arrived in a nice envelope, I thought it was from Arogyashri, and sent the money,” says a now sheepish Shabbir among hearty guffaws from his friends.

Shabbir’s mistake does not reflect on the Arogyashri scheme per se, but it does tell something about the gaping urban-rural divide, which the poor have to make sense of before they can access healthcare through Arogyashri. In Shabbir’s village, no one can read English—the educated young have moved to cities. People later explain that for almost two years Shabbir was tense about the onslaught of the books, papers and slides, fearing some legal or administrative complication would arise from them.

Shabbir’s extreme case apart, the urban-rural divide can hit unsuspecting rural people. Arogyamitra (health worker) from Kondapur public health centre (PHC), D Ashoka, is eager to show off the case of eight-year-old Shravani in the neighbouring Thogarapalli village as a success. Shravani has been operated on for a congenital heart problem. But Shravani’s mother Anitha bursts in with a seemingly unrelated complaint. “Why couldn’t they put us in a less posh’ hospital?” she asks. 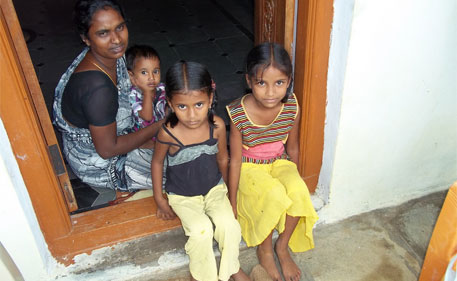 Inquiries revealed that Shravani had been sent to Care Hospital, located in the uptown Banjara Hills. “We knew no one there, the hospital had no canteen and there were no ordinary hotels around,” says Anitha, while adding that one meal cost Rs 100 or more there. “They also do not allow us to stay in the hospital with the patient.”  In the 26 days of Shravani’s hospitalization, Anitha and her husband, who supports three children on an income of Rs 200-300 a day from driving an autorickshaw, ended up spending more than Rs 30,000 on food, stay and commuting. “Shravani is much better since the surgery, but we could have saved the extra expense if we were sent to a hospital closer home,” says her mother.

Post surgery trauma
T Jangaiah and T Mallesh of village Malkapur close by, both landless labourers, are stuck with post-surgery complications, and don’t know where to find redressal. Jangaiah, 60, has developed a huge painful lump, resembling a keloid, at the site of the scar from his bypass surgery. Mallesh, 25, underwent surgery for fractured facial bones, but afterwards felt excruciating pain in the operated area and the vision in his right eye became distorted. Both, however, were told by the respective hospitals where they were operated that nothing could be done. Mallesh had to shell out  Rs 28,000, loaned by a money-lender, for a second surgery which eased the pain. He continues to suffer from distorted vision. Jangaiah suffers in silence because his family already has a debt burden. “I am breathless all the time from the heaviness caused by the lump, and can’t eat or work,” says he. 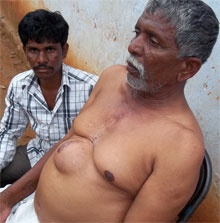 Both have received a packet of papers from Arogyashri after they underwent their respective surgeries, which contained a blank self-addressed inland letter card from Arogyashri for feedback, but it has never occurred to either of them to use it  to voice their complaints.

“The scheme is targeted at the poor, but not tailored to their needs and hurdles,” says Rajan Shukla, associate professor, health care quality, at the Indian Institute of Public Health in Hyderabad. “The scheme does not have any follow-up system to check if the surgeries which government is paying for have really benefited the patients, whether their work-capacity has been restored to earlier levels. Instead, the onus for providing such feedback has been put on the rural poor—the bulk of Arogyashri beneficiaries—who are neither educationally or temperamentally equipped for it. For all you know, thousands or even millions of such patients may be suffering in silence while private hospitals fill their coffers and government congratulates itself on having successfully addressed rural health issues.”

What people want
And what does one say of people like J Ramalu, a manual labourer from Kondapur, who spent Rs 16,000 on treatment of fever, which turned out to be a combination of typhoid and malaria, at a private hospital? “I was denied Arogyashri because I did not need a surgery,” says he. “So what could I do but take a loan?”

Finally, what do the rural poor need by way of health care? “I will tell you what we need,” says K Veerappa. “We need a hospital close by, where we can go and get treated for everything from ordinary fever to big problems. We don’t want to know what scheme we are being treated under, and we don’t want to be burdened with papers. And if the treatment does not work, we want to be able to go back and get treated again.”