Ship breaking thrives in South Asia because of weak laws

The voyage of the Korean made bulk and oil carrier Probo Koala (renamed Gulf Jash) towards an unknown destination has once again brought to limelight the much condemned dumping of hazardous wastes by the developed world on South Asia’s fragile beaches. While no shipping company has admitted its association with the vessel infamous for toxicity, official documents suggest the ship was sold as scrap to an anonymous Bangladeshi ship breaker on May 16, 2011. The Bangladeshi authorities and the Bangla-desh Ship Breakers Association have not disclosed the identity of the buyer.

As soon as the ship was reported to have been sold, the Paris-based human rights organisation Robin des Bois and the NGO Platform on Shipbreaking warned about the possible beaching of the ship either in Sitakunda in Bangladesh or Alang in Gujarat, India. Statements of both the groups depict a horrifying picture of waste dumping.

According to both the groups, Gulf Jash was used by oil trader Trafigura for a dangerous chemical process: reducing high mercaptan sulphur levels in low grade coker nephta with caustic soda. As countries do not allow this process on land, Trafigura decided to carry out the operations on board vessels in the Mediterranean Sea. After several years of operation, the oil trader decided to clean the ship in Amsterdam. When the authorities there demanded a high price, Trafigura took the vessel to Africa to get rid of the waste. Having been turned down by Nigeria, the trader contracted a local company in Ivory Coast and dumped the waste at several places in the country’s largest city, Abidjan.

This dumping of hazardous contaminants killed at least 16 people and affected 107,000 who registered with local hospitals with complaints of nausea, diarrhoea, skin reactions and a range of eye, nose, throat and pulmonary problems. In September 2009, the oil trader settled for a payment of £30 million to 30,000 victims in Ivory Coast but escaped strict legal liability.

The voyage of the ship towards South Asia also led to serious controversies. An article in the shipping journal Llyods List cited an employee of the US ship buying firm GMS as claiming the ship was not sold as a scrap vessel but was instead going to Bangladesh to discharge a cargo of cement clinker. The Bangladeshi authorities, however, have not been able to trace the ship within its territory. Although government agencies in both Bangladesh and India have confirmed the ship is not approaching their territories, the vessel’s whereabouts remain unknown.

This is a major concern for environmentalists as ships raising similar controversies have a record of strangely disappearing. In 2009, the US Environme-ntal Protection Agency fined GMS half a million dollar for exporting the polychlorinated-biphenyl (PCB) laden S S Independence without authorisation and violating the US Toxic Substances Act. Since then, the ship has not been traced. It is believed to have been demolished on the beaches of South Asia.

Following strictures in most developed and developing countries, the inherently dangerous ship breaking industry has moved to South Asia taking advantage of the weak enforcement of environment and labour-related laws. Even judicial activism has not proved effective in countering exploitative practices largely because the bureaucracy and the politicians trade off or surrender their legal mandates to the profits of the industry.

In Bangladesh, government agencies have tactically bypassed the Supreme Court’s directions to regulate the industry. Ignoring the court’s directions for framing binding rules, Bangladesh’s ministry of environment and forests opted for non-binding guidelines and policies. It also did not pay heed to the court’s directions against giving conditional clearances to ship breaking units and cleared at least 66 such units. The ministry has circumvented directions of court to not allow ships with “inbuilt toxics” unless they are removed outside the territory of Bangladesh by amending the Import Policy Order.

Violation of court orders to afford leeway to ship breaking industries is believed to be common in India as well. The Indian Supreme Court has made it clear that ship breaking can only continue in yards authorised to deal with hazardous waste. Such authorisation cannot be attained till a yard has provisions to dispose of waste in an environmentally safe manner.

But yards in Alang reportedly remain closed to journalists and environmental activists raising doubts about compliance of the court orders. The court also directed authorities to negotiate decontaminating ships of hazardous substances such as asbestos, waste oil, gas and PCBs prior to their export to India. But the Indian delegates reportedly did not follow this direction while negotiating and signing the newly adopted International Maritime Organization convention.

In both India and Bangladesh, supply of iron and employment are the two main economic arguments behind allowing ship breaking. In Bangladesh ship breaking contributes to meeting 25 to 30 per cent of the total iron demand and employs around 3,000 permanent workers. In justifying the existence of the ship breaking industry in India, the Supreme Court held that ship breaking will lessen pressure on mining. But statistics do not support this contention.

Compared to the so-called economic contribution of the industry, its waste flow is frightening. The Indian ship breaking industry prefers passenger ships while Bangladesh usually imports oil tankers. According to an EU assessment an oil tanker weighing 100,000 DWT is likely to have on board 2,413 kg asbestos, 8.3 kg PCBs, 17,000 kg anodes, 689,655 litres of oil sludge and 114,000 litres of heavy fuel oil. All of these get released when the ship is dismantled and none can be effectively contained in a beaching facility not having hard soil. The asbestos contents in passenger ships is generally higher.

A December 2010 study of the World Bank depicted an alarming state of pollution of soil in the ship breaking area at Sitakunda beach in Bangladesh. The study also projected that in the next 20 years Bangladesh’s beaches will accumulate not less that 79,000 tonnes of asbestos, 240,000 tonnes of PCB, 1,978,000 tonnes of waste liquid organic and 69,200 tonnes of the toxic tributyltin. The World Bank team studied Alang as well. But fear of controversy stopped it from revealing the findings.

Ships destined for breaking are “waste”, as defined by the Basel Convention (that deals with hazardous waste), and in most cases likely to contain hazardous substances to an extent rendering such ships “hazardous waste”. Following Basel, the EU has recognised ships for dismantling as “hazardous waste” and so has the judiciary in India and Bangladesh. The EU, however, is ignoring an amendment to the Convention that prohibits export of waste from OECD to non-OECD countries and also the Basel requirement of not sending ships to a destination where they will not be dismantled in an environmentally safe manner. Instead, EU flag carrier ships merely change the flags to those of small island countries prior to their final voyage towards the South Asian beach, a process termed the Flag of Convenience. To continue such deceptive practices, the shipping world led by the major shipping countries floated the Hong Kong Convention. This relieves ship owners of all responsibilities to clean their ships and bear the cost of dismantling and environmentally safe disposal of waste. It requires ship breakers to monitor their actions and ensure compliance.

Interestingly, this new Convention, though signed by India and Bangladesh, has been rejected by the ship breakers of all the three South Asian countries. The logic is simple—ship breakers do not want to follow even the weak rules. The industry has closed in countries that enforce law and take into consideration the environmental and human costs. It has moved to areas that according to the World Bank are regarded as “pollution heavens”. Till the South Asian countries remain illusive about the industry’s short-term profit and fail to take conscious and objective decisions, the economics of ship breaking will continue to favour the developed nations which find a free place to dump their junk without incurring any cost whatsoever. We must act to turn the economics around by demanding internalisation of costs. Our lives and beaches are not for free. 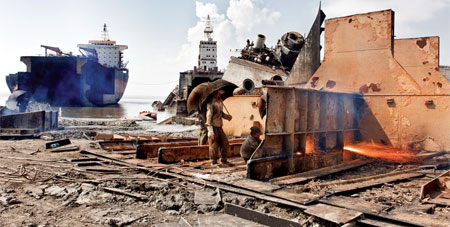