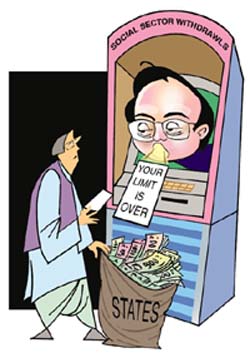 THE centre's commitment to targets stipulated by the Fiscal Responsibility and Budget Management Act, 2003, threatens to set it on a collision course with states. The matter at hand is funding social sector projects. Going by discussions on preparation of the Union budget 2007-2008, the centre seems to have made up its mind to ask state governments to share expenses for social sector schemes. It's a prospect which states don't like. The matter also throws up questions related to the country's fiscal accounting system.

Social sector projects come under the fiscal responsibility act's ambit because expenses on them is slotted as revenue expenditure. The act enjoins the government to bring down its overall fiscal deficit to 3 per cent of the country's gdp by 2008-2009; it also stipulates zero revenue deficits by 2008-2009.

The centre contends that states have huge surplus, which could be used in the social sector. "The centre will also increase investment in certain sectors, and ask states to redirect the money they spend in these sectors to the social sector," says Pronab Sen, principal advisor to the Planning Commission.
State governments see the matter differently. The maintain that the fiscal responsibility act also asks them to reduce revenue and fiscal deficits. This means that they too have to reduce social sector spending. Any more financial burden from the centre will compound matters, they argue.

"Our precarious fiscal position makes compliance with the fiscal responsibility act almost impossible. The centre should support us with social sector initiatives," says Thomas Isaac, Kerala's finance minister. "The centre must give concessions to backward states. We will oppose any move to curtail funds," adds Prafulla Ghadei, Orissa's finance minister.

The centre-state disharmony over implementing the fiscal responsibility act had its antecedents in a recent dispute between the Union finance ministry and the Planning Commission over increased government spending on programmes like the nregs and the icds. The commission had opposed giving preference to fiscal matters over social spending.

The centre, in contrast, has been arguing that financial conditions of most states have improved considerably after the implementation of the Twelfth Finance Commission's recommendations including debt restructuring and waiver. Implementation of value added tax across the country has also helped state finances, the centre maintains. The Reserve Bank of India's latest report, State Finances A Study of Budgets of 2006-20007 puts the cash surpluses of states at Rs 38,983 crore. The study has suggested placing bulk of the responsibility on expenditure in social sectors with state governments.


But should social spending be curtailed to bring down revenue deficit? And, is fiscal deficit necessarily bad? Jayati Ghosh, professor, Centre for Economic Studies and Planning, Jawaharlal Nehru University, New Delhi, contends "Reducing deficit may well have depressing effects on the economy. Large-scale fiscal deficits do not necessarily lead to higher inflation, that happens when demand exceeds supply".

Even the Parliamentary Standing Committee on Finance, which examined the fiscal responsibility bill in its report in 2000 had suggested that planned deficit-financing is not harmful as long as it results in creation of assets and there are adequate returns from these assets. For example, nregs creates lots of ecological capital using the guaranteed jobs. So it should ideally be a capital expenditure. "In the long-term, social sector spending creates social and economic capital. So, terming them revenue expenditure is not sensible," says C P Chandrashekhar, an economist with the Delhi-based think-tank Economic Research Foundation.

Even the Planning Commission's 11th five year plan (2007-12) approach paper had warned that the plan's focus on education, health and agriculture might be "defeated if the fiscal responsibility act's discipline is insisted with the current definition of revenue deficit".

It will be interesting to see how the government strikes a balance between social security and fiscal prudence.