Is the warming Pacific Ocean finally signalling an El Niño?

After cooling down suddenly in July, the Pacific Ocean is warming up once again but it could be another mischief played by the 'Little Boy'

After cooling down suddenly in July, the Pacific Ocean is warming up once again but it could be another mischief played by the 'Little Boy'

In July of this year, the Pacific Ocean gave a big cold shock to the anticipators of El Niño. Instead of warming, it suddenly cooled down. My earlier blog had explained why this happened and how important is the synchronisation between the water of the equatorial Pacific Ocean and the atmosphere above it. For a full blown El Niño, there has to be a perfect coupling between the two—atmosphere should respond to the water and vice versa but when this relation becomes one-sided, premature signs of an El Niño formation in progress show up only to fade out later.

El Niño or Little Boy in Spanish (referring to Christ child) is very mischievous. It becomes more mischievous when the Little Boy gets a friend to play with. This friend is Kelvin Wave. I would say that the Kelvin Wave is more mischievous than El Niño. In the same blog, we had also seen how a Kelvin Wave (its downwelling phase rather) warmed up the Pacific Ocean around March, which triggered the El Niño buzz actually.

Kelvin, El Niño’s buddy
To understand how El Niño’s buddy works, let’s think that the Kelvin Wave is an expert diver (Kelvin) and a swimmer having fever. The swimming pool is of course the big Pacific Ocean. Let’s assume that Kelvin dives from the western part of the Pacific Ocean, near Indonesia. Also think that Kelvin, upon his entry in the pool, has the capacity to warm the water with his high body temperature. Kelvin is ready to dive and is waiting for the signal but he is unable to dive because of the strong winds blowing against his face (from the side he is facing, that is the eastern part of Pacific Ocean). When he gets a green signal (when these winds relax or all of a sudden blow in the opposite direction, thus favouring a dive), he dives very deeply, say reaching a depth of 300m below the surface of sea near the central equatorial part of the Pacific Ocean, and then emerging near the eastern Pacific Ocean. As Kelvin dives, he heats the water around him, as assumed. Any dive has two phases. A downwelling phase (when the swimmer descends in the pool) and the upwelling phase (when the effect of dive is over and he comes back to the surface of the pool).That’s exactly how the Kelvin Wave works.

We know that under the normal conditions, the easterly trade winds blow near the surface mostly from South American coast towards Indonesia/Australia (say east to west motion of the winds) and in this process they carry the warm water along. This warm water piles up near Indonesia due to which the sea surface temperature and the sea surface level is higher there as compared to what it is near the coast of South America. This is why we took a Kelvin having fever. Now what happens when this hot piled up water gets a green signal? It gets released, which is the Kelvin Wave.

This green signal is given by westerly wind burst (winds suddenly blowing from west to east) or our easterly trade winds (those which were blowing against the face of Kelvin), relaxing a bit in the western Pacific Ocean. When this happens in this region where the warm waters are piled up, the warm water gets released from around Indonesia in the form of a downwelling (downward motion) phase of the Kelvin Wave and the Pacific Ocean gets warmed up in this phase of Kelvin Wave. Now check this animation to see this dive in reality. Hover the mouse over the boxes of  “VIEW FEB 19,VIEW MAR 16,VIEW APR 18” to see the motion.

Such a Kelvin Wave usually triggers an El Niño as the conditions for El Niño formation and onset are mostly in place during and after this wave propagation. But it’s not necessary that all the Kelvin Waves would trigger an El Niño and that's why this friend of El Niño is more mischievous.

Why the Pacific warmed again 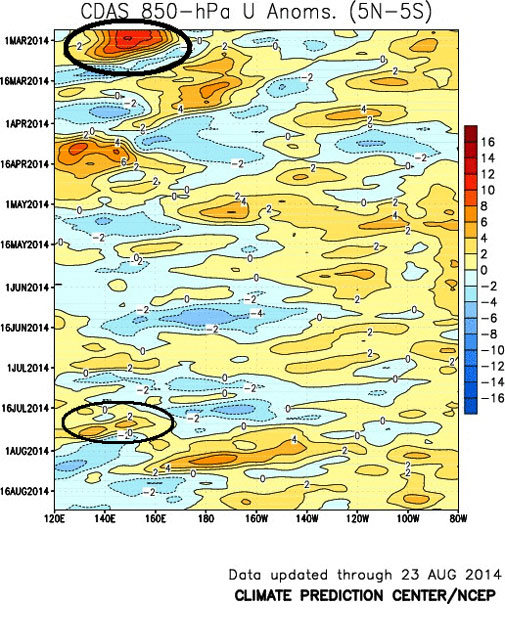 The above image represents the anomalies in the winds blowing at 850 mb or roughly at 5,000 ft above the sea level. Vertical plot (Y-axis) indicates timespan and horizontal plot (X-axis) indicates the longitude. Yellow, red colours (positive values in the boxes) indicate westerly outburst (sudden winds blowing from west to east) and blue indicates easterly winds/outburst. The black circled region corresponding to March 1, this year represents the westerly outburst that had triggered the Kelvin Wave seen in the animation mentioned above. Recently, some weak westerly outburst was seen around mid-July in the western Pacific (in the 120E-160E region) shown as thinner black circled region. 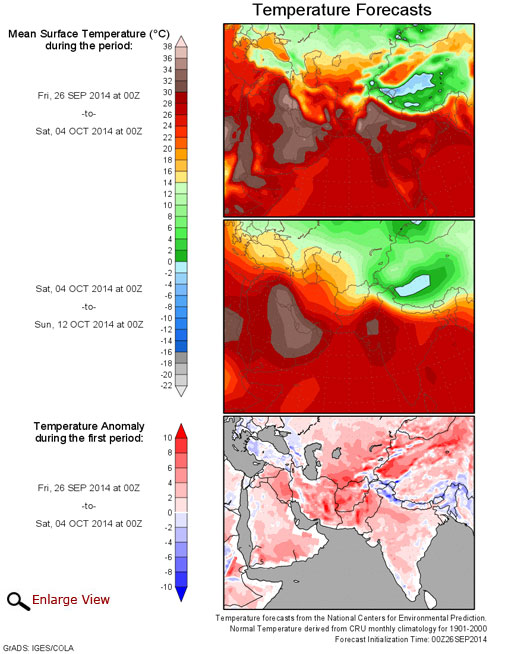 This weak westerly outburst released some warm water as can be seen in the above image. The image shows the temperature anomalies in the subsurface equatorial Pacific Ocean. Depths (in metres) are given on the Y-axis and longitude on the X-axis. Yellow/orange/red indicates positive anomalies and one can see how it increased and moved to the right side (eastwards) in the pacific ocean between July 2 and August 18. This clearly reveals that this is a downwelling phase of a new Kelvin Wave. This animation can be seen here.

How much has the Pacific Warmed?

The latest weekly (week ending on August 20) SST anomalies in the Niño regions especially the Niño 3.4 (which is monitored for the ENSO status) are positive and the values are as follows:

But that’s just weekly. The Niño 3.4 SST anomaly has to stay equal to or above 0.5ºC for at least five consecutive three-month periods (where a three month period is like April-May-June, May-June-July and so on.) along with proper winds in the atmosphere for a declaration of El Niño.

When can we expect the El Niño announcement now?

The image above shows the winds near the surface. Indonesia lies to the left of image. The arrows indicate the direction of the wind. The longer the arrow, the faster the wind is. As of now, the winds (which should be westerly, pointing towards right side) in this part of Pacific are near average and nothing great is cooking here. So, if the westerly winds don’t emerge soon, the Pacific Ocean is likely cool down after the downwelling phase of Kelvin Wave propagates completely- once again a case like in July.

The SST anomaly of May-June-July (MJJ) is 0.1ºC. Let’s assume that the period June-July-August (JJA) gets the first 0.5ºC SST anomaly or above it (this is unlikely though), it continues in the next five overlapping periods (JJA, JAS, ASO, SON, OND) and the atmosphere also responds, so the announcement of El Niño will come not before January 2015. June’s SST anomaly in the Niño 3.4 region was 0.11ºC, in July it was -0.01ºC. 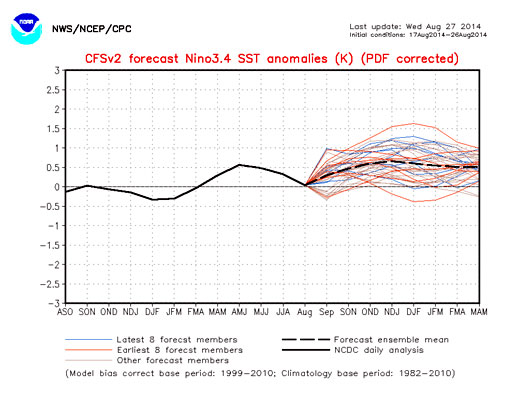 NCEP’s CFS V2 (Coupled Forecast System) Model (as seen above) has a good track record of forecasting such SST dips in the past and hence its reliability is higher. On the Y-axis, SST anomalies are mentioned in degree celsius and on the 3-month period on X-axis. Black dotted curve shows the mean forecast which still indicates that the SST anomalies would be rising in the coming months and thus allowing a weak to moderate El Niño to form.

So if the period of July-August-September becomes the first to touch 0.5ºC or above, the announcement of El Niño may come as late as February 2015, provided the atmosphere responds.

As per CPC (Climate Prediction Centre) and IRI (International Research Institute for Climate and Society), the chance of El Niño during the fall and early winter of 2014 has decreased to 65 per cent and as per the Bureau of Meteorology, Australia, chance of El Niño forming in 2014 is at least 50 per cent.

Heavy rains to threaten coastal Maharashtra
A fresh low pressure system from the Bay of Bengal is all set to travel through Andhra Pradesh and Karnataka, bringing good rainfall in these states. It will end up producing heavy rains in Goa and coastal Maharashtra between August 30 and September 1. Mumbai will be impacted prominently and is likely to see water logging again, leading to daily life problems, especially for the commuters. People must stay alert in this period. Rains will be shifting towards Daman-Diu, DNH, much of Gujarat on August 31 and September 1.