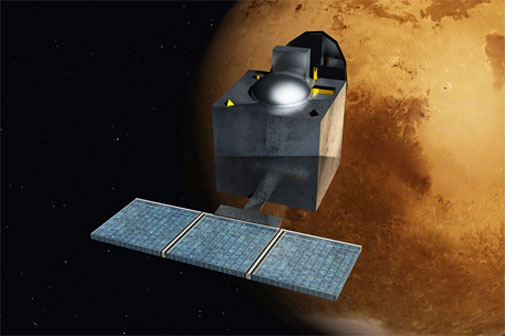 The sigh of relief is palpable. Everyone tries to hide his or her smile; the body language exudes confidence. ISRO engineers could sucessfully wake up the thruster LAM engine sleeping for the last about 300 days and test-fire it for about 4 seconds. India's Mars Orbiter Mission (MOM), popularly called Mangalyaan, has crossed a crucial hurdle.

The day dawned with the news of NASA's Mars probe MAVEN successfully inserted into the Martian orbit and now the MOM has awakened from its deep slumber and has entered into the sphere of influence of Mars.

See more
Out of this world mission

MOM has travelled more than 680 million km and has covered about 99 per cent of the total distance; it is just 500,000 km short of the final destination. Currently, the spacecraft is propelling at a breakneck speed of about 22 km per second (80,000 kmph) on an orbit around the Sun in a path that intersects the orbit of Mars. On September 24, at about 7.30 am IST, both the MOM spacecraft and the Mars will arrive at this intersection. Precisely when the spacecraft is about 700 km above the surface of the Mars, the LAM engine should start and the retro-firing should take place, failing which the mission is lost.

When the decisive firing of rockets takes place on September 24, the purpose is not to increase the impulse but reduce the velocity—that is, the rockets will be used as a break. For the spacecraft to be transferred into Martian orbit, the velocity has to be reduced to about 1.1 km per second. The engine has to fire for about 24 minutes and during this it should achieve necessary negative thrust. If the negative thrust is more than anticipated, then the resultant spacecraft velocity will be less and MOM will not enter into the projected orbit around Mars. The life of the spacecraft may be substantially reduced. If the negative thrust is less, then the resultant velocity will be more, making it impossible for the gravitational capture by Mars; MOM will just fly by and will be lost in space.

Flawless functioning of the LAM was pivotal to the mission. If the activation of the engine after 300 days of space journey had failed, it would have compromised the mission. ISRO was confident of this 440 newton liquid apogee motor or LAM engine. It had been its workhorse to nudge the spacecraft from the temporary orbit to which PSLV rockets could take in near Earth orbit to permanent location in space. Even during the Chandrayan -1 mission, it is the very same engine that nudged the spacecraft towards the moon and was again used to decelerate so as to be captured by the Moon's gravity. However, for the Chandrayan mission the engine hibernated only for two weeks but for Mars mission the engine had to survive treacherous deep space with dangerous radiation and thermal conditions.

Prolonged deep space exposure could have resulted in corrosion, leak or bulging of the pipes, leading to impairment of the engine. Anticipating this, in this mission, ISRO has added a second set of values and fuel lines that would be opened only when the spacecraft nears Mars. Before launch, both set of propellent lines and the engine have been tested on ground before they were launched. To be doubly sure, the engines were test fired today to ensure flawless operation on September 24.

Both sets of the propellent lines were used sequentially and the engine was fired for about 3.968 seconds at 2:30 pm today. As the spacecraft is about 223 million km away from Earth, the operations were automated. Time coded instructions were uploaded many days ago to the spacecraft and the instructions were executed flawlessly. After the operation, due to distance, there was time delay of about 11 minutes for the data to reach MOX. After analysis, ISRO announced that 0.567 kg of fuel was consumed in the firing and a gain of 2.142 m/s velocity to the spacecraft has been achieved. The very same test-firing was used to course correct the path of the spacecraft. The results are in the expected range and hence ISRO scientists are exuberant.

Contingency plan
ISRO indeed had a contingency plan up its sleeve if their effort to wake up the 440 newton engine had failed. There are eight small 22 newton thrusters in the spacecraft, essentially for attitude and orientation correction. ISRO had a plan to fire these eight rockets in unison on September 24, but for a longer duration to get necessary deceleration. However, if ISRO had to resort to plan B, then it would have had serious impact on the lifespan of the spacecraft around Mars and the orbit.

Although few other crucial manoeuvres are pending for the next few hours and the success of the mission crucially depends on them, the successful test-firing has given confidence and some ISRO scientists remark that now the mission is as good as victorious.

The spacecraft and its five payloads are in good health and checked regularly and at this point of time there is nothing to be alarmed about. If all goes well the MOM will take pictures and collect scientific data for about six months.

MAVEN and MOM
NASA's MAVEN mission will primarily study the upper atmosphere of the Red Planet and try to understand the process of degassings that resulted in thin atmosphere. The air pressure in Mars is so low that free water at the surface would instantly boil away. MAVEN's data will enable scientists to build better models of current and past climate conditions on Mars.

Indian MOM has unique payload to detect presence of methane in the upper atmosphere. Hence, NASA has even evinced interest in collaborating with ISRO to pool the data from its MAVEN mission with ISRO to comprehensively study the atmosphere of Mars.