It is time ASI stood up to demands of protecting relics

When the French naturalist, Henri Mouhot rediscovered the sprawling Khmer temple complex in Cambodia's rainforest in 1861, he exclaimed, "Grander than anything left to us by Greece or Rome." I too was awestruck on seeing the Angkor temples early this year and realised that Mouhot was not exaggerating. The layout of the temples is based on Hindu mythological cosmos with towers representing mountains in the centre, and a surrounding moat representing the sea. Cambodia's Khmer Empire was founded in ninth century and the Angkor Wat was the Khmer rulers' tribute to Hindu Gods. I was equally thrilled to see engineers from the Archeological Survey of India renovating one of the ruined temples as part of the Ta Prohm Conservation Project--a collaborative venture of the Cambodian ministry of culture and unesco.

The trip was an eye-opener.Monuments and landscapes had never really held much attraction for me, but the brief interaction with the Indian engineers and their passion to renovate ancient temples in Cambodia inspired me on to a geological/archeological trip in India's wilderness.

My opportunity came soon. A month after my Angkor visit, the Sadguru Foundation--a prominent Indian ngo, which works on rural development--invited me to one of their activity centres. I had to assess the impact of check dams and other water harvesting structures erected by the ngo in Chwsala, a remote tribal village near Dahod in Gujarat, along the Rajasthan-Madhya Pradesh border. During the course of my duties, I passed a landscape that reminded me of the Rift Valley in Africa: there was an abundance of fossils. Manhar Patel, the engineer accompanying me, said he would show me a dinosaur egg. It seemed a hugely exciting prospect and and we quickly ventured out of the rocky desert in search of the fossilised dinosaur eggs. Our search ended at a small temple in Pavadi village, about 8 km from Dahod, where a dinosaur egg lay half buried in cement in the midst of a Shiva lingam. 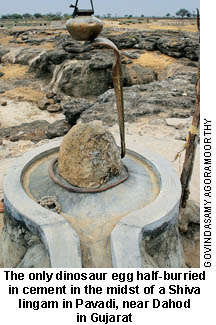 Patel said that Pavadi once had a lot of these eggs. But most had been taken away by foreign tourists--including archaeologists. Some residents of the village even found that they could make a quick buck by selling the eggs, Patel said. As a result, the dinosaur egg at the Shiva temple was now the only one left in the village, he told me. A rusty board along the dirt road proclaiming, 'Archeological Survey of India', stood in mute testimony to the loss: there was no fencing and no guards.

During another visit to Rajasthan, I saw two fascinating Buddhist cave temple complexes in Jalawar district: Kolvi and Binaiga. The seventh century ad rock cut structures in Kolvi were discovered in 1853. They include a Buddha statue, five meditation chambers, three stupas and two temples. There was also the familiar Archeological Survey of India sign stating "the site is protected by the ancient monuments act of 1958". And, there were no guards again. The only person I saw was a goat herder with a loud transistor radio listening to Hindi film songs. The fate of these relics make me wonder if India's Ancient Monuments Act of 1958 has ever been reviewed critically to test the enforcement practices.

It's a pity. For, India's rocky terrains have a unique geological history and diversity. They date back some 4,000 million years. Instead of showing rusty sign boards to visitors in rural Gujarat and Rajasthan, the Archeological Survey of India must stand up to the demands of protecting them.

It's also time for India's policy makers and politicians to undertake a serious mission to identify, understand, and ultimately preserve the often ignored ancient monuments in rural areas. The government did increase the Archeological Survey of India's fund allocation this year. But mere funds are not enough. It is high time we realised the significance of these relics.