It's a damp squib 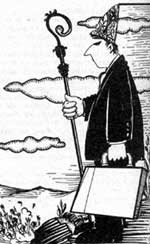 THE RIR had raised considerable expectations in western India. The report, however, came as a damp squib.

The only substantive comment made by the report relates to basic hydrology, which states, "We found that there is good reason to believe that the project will not perform as planned." The reference is only to annual flow data and the report states no other basis for making its sweeping conclusions.

On the crucial issue of resettlement and rehabilitation, the report does not appear to have found any specific deficiency or weakness in the resettlement package offered by Gujarat. It recommends that the package be extended to families displaced by the canal works also, which is sensible. Most importantly, it suggests that not only landholders, but also children who have attained majority, encroachers and landless families who are affected by the project should be granted agricultural land. This is already being followed in Gujarat, but Maharashtra and Madhya Pradesh have yet to agree to this and should do so.

The only other analytical point made by the RIR is on the rehabilitation of "tribals". Here, their very western, Christian-Judaic worldview has led to some half-baked generalisations on Hinduism and tribalism on which there is bound to be considerable debate.

The Morse group has little space for Ghanshyam Shah and his colleagues who fought the irrigation bureaucracies in the early 1980s, to craft the Gujarat rehabilitation package. Instead, there are copious references to World Bank expert Thayer Scudder's view of the adivasis as outlying tribals.

The report refers to "a tendency in some sections of the Hindu society to claim that tribal peoples are just a poorly integrated part of the mainstream culture of India". Indian scholars like Vidyut Joshi get the rap, some like Anita Baviskar get a mention, but are largely ignored on the 'porosity' of 'tribe' and 'non-tribe'.

The central questions, however, are not raised at all. As Ananta Giri points out, the fun-loving gods of Vaishnavite Hinduism are very different from the stern western concept of a Judaic-Christian god. The relationship of different religions in India and subaltern religious movements and their impact on the scheduled castes and tribes are not discussed. Really, Mr Morse, couldn't you at least consult some Indians of Christian or Judaic origin?

Morse and his colleagues have written a strongly ideological report and have scant respect for facts, whether of hydrology or of India's religions and its laws. The straw man, who they set out to demolish, is presented in the first paragraph of the report. He is none other than Jawaharlal Nehru. And so the report begins: "After Independence, Prime Minister Jawaharlal Nehru ordained high dams as India's secular temples. India, in seeking to realise Nehru's vision, has become the world's greatest dam builder. Many of these dams have been financed in part by the World Bank."

You have made it, World Bank!

---Y K Alagh is a professor of economics at the Sardar Patel Institute of Economic and Social Research, Ahmedabad.