It’s all about the money

Even as countries accepted the proposed programme budget, member states demanded more transparency in the way WHO funds are disbursed. A look at what happened behind the scenes on Day 3 of the World Health Assembly

Even as countries accepted the proposed programme budget, member states demanded more transparency in the way WHO funds are disbursed. A look at what happened behind the scenes on Day 3 of the World Health Assembly 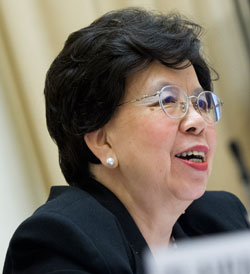 The member states of the World Health Organisation (WHO) behaved like strict parents refusing to give pocket money. The third day of the assembly clearly showed that WHO is trying hard to keep member states happy to ensure a smooth supply of money.

The session on "programme and budget matters" started with a review of WHO's report card for the last year—the organisation failed on many counts, but was forgiven in light of the Ebola epidemic. They were, however, asked to provide a plan on how they would catch up on the programmes.

But member states were in a hurry to go to the next item on the agenda—the proposed programme budget for 2016-17. WHO asked for an increase of eight per cent in overall funding. Countries showed interest only if it was voluntary contribution and not assessed contribution.

The proposal of 8 per cent overall increase was received better, despite being higher, as it will come from voluntary contributions. Such contributions can come from sources other than governments. This has always been a bit controversial considering that donors such as the Bill and Melinda Gates Foundation then have an avenue to drive the agenda of the world body. WHO has prepared a framework of engagement with non-state actors—this was with the drafting committee on May 20 and will be discussed in Committee A on May 25.

At the committee A meeting, most countries asked for a better understanding of how WHO funds are used. They asked for more accountability and transparency at WHO.

Some countries like Norway pointed out that the organisation had failed to provide the information asked for. Others like the Netherlands suggested that WHO needs to use funds more efficiently. New Zealand pointed out that a reduction in the budget for communicable diseases is contradictory to the demand for higher funds. In this, the secretariat's reply was indicative of the problems that WHO could face if more non-state actors became donors.

The secretariat said that funds for communicable diseases have been reduced in some places as organisations like The Global Fund and GAVI, the Vaccine Alliance, are active in this field. If GAVI is providing vaccination, we can reduce funding, reiterated Margaret Chan, director-general of WHO. But GAVI represents the private sector and there is scope for conflict of interest.

It is now imperative that the framework of engagement with non-state actors is considered quickly. But the problem is that issues of conflict of interest have not been defined well.