Eco-friendly products, services are nothing but excellent marketing strategies 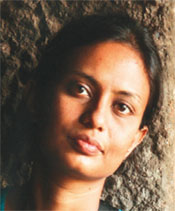 Contemporary media is awash with messages on “intelligent buying” and how it can save the planet. Buried in these messages are nuggets of environmental wisdom—ideas on energy efficiency and organic materials and concerns about rainforest depletion and chemical toxicity. These messages leave no doubt in the viewer’s mind that the upper and middle classes of consumers worldwide are dedicated to the cause of environmentalism. However, this shift to environment-conscious mode is merely an illusion.

While advertisements wax eloquent on the virtues of companies that plant 10 saplings for every tree of “conscious timber” they bring to the market, the real cost of felling a large tree is an entire ecosystem of birds, insects, small animals, epiphytes and so on. But this fact is kept hidden from the consumer. Planet earth has consistently lost its greenery ever since human beings discovered the power of fossil fuels. But our choices in “green products” seem to have increased considerably only in the past few decades. From “eco-friendly air-conditioners” to herbal shampoos, from “green realty” to “nature-wise bottled water” and ecotourism, there is a green choice in most purchasing decisions that we make. Beaming with confidence by this magic of demand and supply are proponents of free-market economics who claim that all environmental damages can be offset if consumers demand eco-friendly products and producers oblige them.

But in reality very few things change behind the scenes in production. Producers label or project objects as “green” with the sole purpose of maximising profits through sales, which is dubbed “greenwashing”. The scope of greenwash is amazing and its power intense at this moment when our collective sense of guilt about what we are doing to our planet is on the rise.

So what, if we are running up against the limits of the planet because we buy too much? Buy again, only buy “green” this time, and all problems are solved. In preaching this philosophy, greenwash assumes a certain imbecility in the general population, and so far, it has gotten away with that assumption, often leaving us teary-eyed at its images of a green, techno-fantasy future where human society enjoys abundance without so much as touching the natural environment.

Capitalist consumerism has long trained our brains into accepting that its reductive logic is the only logical paradigm. People presenting such illogic as replacing one tree with 10 saplings are aware of the limitations of these numbers, but our training as consumers has been so intense (an individual views 3,000-4,000 advertisements per day on an average; the advertising industry in the US was worth $153 billion in 2013) that if our conscience is even mildly disturbed by the thought that global consumerism is trashing the environment, a little bit of greenwash alleviates it. 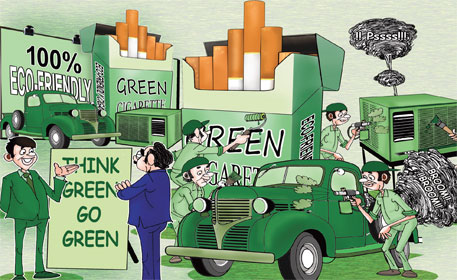 Greenwash has been so successful because of at least two distinct reasons—one, it is an excellent marketing strategy. Just like expensive organic food marketed to the purity paranoia of some consumers, it feeds into the environmentalist’s fantasies of an otherwise overconsuming, overpolluting minority. It is the way of capitalism to indicate that it is not going to die out simply because a section of people are concerned about the health of the planet.

Just as women’s issues or race issues are co-opted to sell products, greenwashing has become an effective way of hijacking the cause of environmentalism and sustainability. If need be, facts can be fudged or misrepresented, and harm to the environment can be underplayed through incomplete or misleading statistics. Bottled water companies that choke the ocean with plastic bottles try to alleviate users’ worries by simply stamping their bottles as recycleable material. The recycling never happens, but consumers feel that they are helping the environment by buying that water. 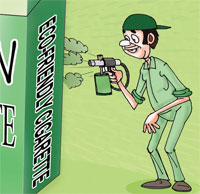 The second reason for the success of greenwashing is slightly more complex, because it deals with the societal internalisation of corporate capitalism and its mantra of progress. A vast majority of people on this planet have come to believe that colonialism and capitalism have led to the overall progress of the human race, and that the gadgets of convenience that surround us are the most apparent signs of this progress. Collectively, the capitalism-induced dream for the future of the planet, even in its most ethical and egalitarian form, could be represented by the following: a small and prosperous population with access to all forms of comfort, convenience, and easy global communication. But it is also clear to the simplest of minds that all this cannot be afforded to a planet of seven billion people. A belief lurks that by “greening” some of these products, our current lifestyles can be maintained. But the truth remains that wind, solar or bio-energies, however necessary, will not meet the insane growth curves of current global needs.

The need for comfort and convenience itself needs to be curbed for any mode of energy production to sustain, or for that matter for the planet to sustain.

The “progress” metaphor clashes directly with this piece of common sense—the urban upper and middle classes see the idea of curbing and reducing needs as an affront to the discourse of progress. They feel that “going back”, even a step or two, from energy-intensive mechanised or electronic systems means becoming primitive in some way. More often than not, this is a matter of perception of viewing and judging through a mind that has completely internalised capitalism’s discourse of progress.

Consider the issue of clothes-drying in the US. Clothes can be dried in the sun all year round in many places including the US, but the perception is that drying clothes in a machine is more “civilised” and somehow more advanced than letting your neighbours see your laundry. This perception is so widely accepted that most housing societies and homeowners’ associations prohibit public clothes-drying. Like vegetable gardens on the front lawn, clotheslines on the front or the back of the house can lead the residents being tendered notices from the association—it is a norm that they must abide by if they are to continue staying in the house they own. Greenwash intervenes successfully at this juncture to present “energy-efficient” dryers. These can be deemed better than ordinary dryers if they are used for a certain period of time and if we do not consider the environmental cost of the production of a new dryer, but they are, nevertheless, fossil-fuel dependent.

The whole exercise is, therefore, an incomplete capitalist fix for a problem that can be solved much more effectively through a mere mental shift that tends to replace bad products with good practices, not with other products. The future of greenwash, at least its immediate future, seems far from bleak because in addition to being an excellent strategy designed to cash in on this moment of rising fear and apprehension, it evokes social and environmental responsibility. Like charity, it leaves its practitioners with the afterglow of having done something good for this world without upsetting one’s social and economic class position.

Greenwash is destined to enjoy immense success as the guiding norm of capitalism in the years that will lead up to extreme climate change, the end of oil and extinction of species. But it will hardly ever provide solutions to the real problems unless we realise that true progress might indeed be about moving a few steps back.

In addition to gaining perspective, we might even innovate practices that replace buying, rediscover the power of community, rethink why co-operatives and sharing drives and local economies are being adopted in so many places, start growing our own food, and who knows, maybe even give up a few things we do not really need?

Aparajita Sengupta is co-founder of Smell of the Earth, a community dedicated to activism related to food and environment