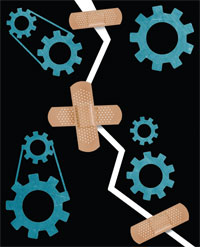 Nothing perhaps sums up India so well as jugaad. A Hindi word that means a makeshift solution or a creative improvisation, jugaad is the science, art and philosophy of what makes India tick. Need a critical part for your fancy imported washing machine? The resourceful electrician will do a jugaad with a local thingummy and make it work. Have a problem with your vintage car’s radiator? The grease-laden mechanic will, after experimentation, come up with a jugaad to fix it.

Jugaad comes from the necessity of having to make do with scarce resources, both money and material, and it has shaped the way Indians deal with a variety of everyday situations. In recent years, it has been elevated to the new science of “frugal innovation” with management experts and academics singing the praises of India’s jugaad way of finding solutions to problems that enterprises are unable to address. Books have been written about it and some academics have gushed that “jugaad offers a powerful way to solve not only India’s major problems but also the world’s”. Apparently, it would “come to be seen as India’s unique and enduring contribution to the world”. The low-cost Nano car developed by Tata Motors is listed as a shining example.

It has taken a while but finally someone has cut through the hype and put jugaad in its place. RaghunathAnantMashelkar, one of India’s top scientists, told a gathering in Panaji on July 18 that the country’s image has taken a beating because of its penchant for making innovations affordable. PTI news agency quoted Mashelkar, who retired as director general, Council of Scientific & Industrial Research, and secretary, Department of Scientific & Industrial Research in 2006, as saying: “In the field of innovation India’s image is bad across the world because of our tendency to have jugaad, which means getting less from less people. Somehow, cost is the only consideration.”

Mashelkar gave vent to his irritation with the tendency to “somehow fix things”, saying tartly that, “I don’t like this.” The internationally reputed scientist says the effort instead should be to support the idea of “affordable excellence” which he has been propagating but, clearly, without much success. The senior boffin believes we should be using high technology to create products that are affordable for everyone because even the poor, those at the bottom of the economic pyramid, have the same right to excellence in quality that the rest enjoy. This is a sharp swipe at the cult promoted by management guru C K Prahalad in 2004 that enterprises should exploit the huge potential for cheap products to be made for the millions of poor Indians at the bottom of the pyramid.

Mashelkar’s diatribe came just as the World Intellectual Property Organisation released the Global Innovation Index for 2014 that showed India slipping 10 places to come in at 76 out of 143 economies. Its vaunted jugaad did not help it to improve its standing among BRICS nations, the only one of these five countries that did not make any progress in ranking over the previous year. The report links this to the country’s inability to drive the education system to produce high-quality human capital and to integrate the different dimensions of innovation.

It might be relevant here to point out an often-forgotten distinction. Even if India were doing nicely on innovation, as it thinks it is, it does not make it an inventive nation. Invention involves the creation of new things from new ideas whereas innovation is making improvements to existing concepts. And jugaad is a cheaper adaption of existing innovations. That will not take us very far.