The cleaning force of every country has an indispensable worker, the rag picker. But the health and safety of this person is conveniently ignored 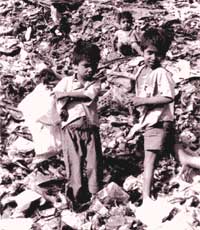 "but for a pair of shorts, the whole of Pancha's body is uncovered. Before him lies a vast, undulating expanse of garbage. A giant bulldozer, with its ear-splitting roar, is levelling out those heaps... he almost merges with the landscape", writes R Bandhopadhya in Business Standard (July 29, 1984). One of many reporters' images of a garbage picker. While millions of dollars are being spent on research on global environmental problems and formal occupational health, each year, only a few thousand dollars go into basic research on the multiple environmental hazards that confront those people categorised as rag pickers.

They have become the ultimate symbols of poverty and degradation and yet are, in essence, invisible to scientific researchers and international health organisations. While environmentalists and policy makers vigorously recommend waste recycling as essential for sustainable development, the health and status of those on whom it depends is rarely investigated and scarcely understood. Because waste pickers are informal workers labouring as individuals, in family groups or in teams organised by controllers, they are not counted as part of the workforce. While there are no estimates of their numbers, at least two per cent of the population of any large city depends upon waste gathering for its income and daily needs.

In Manila, at the Tondo dump known as Smoky Mountain, 18,000 people live on the dump itself and 90,000 more resort to scavenging. In Mexico City, one large dump is home to 6,000 pickers. About 3,300 people in Cairo retrieve wastes during waste collection. In Calcutta, some 300-400 persons pick from the main dump while nearly half a million people are thought to depend upon recycling solid wastes and sewage in the wetlands of east Calcutta. In Bangkok, at the On Nooch dump, about 2,000 men, women and children can be spotted daily. If all those who handle retrieved materials could be counted, this work would be recognised as a significant urban occupation supplying fuel, aiding industry and saving foreign exchange.

Waste pickers are shunned everywhere as lowly and even as outcasts. Their low status is a major factor responsible for their extreme environmental vulnerability. They are typically malnourished, yet work for long hours in heat, rain and humidity. Their handling of wastes brings them repeatedly into contact with human and animal excreta. Tetanus, colds, rheumatism and backache among the workers are chronic. In damp, dusty and crowded sites -- where they work alongside pigs, goats, cattle and dogs -- the conditions for disease transmission are magnified. The incidence of tuberculosis, respiratory diseases, eye infections, anaemia and skin irritations among them is higher than for other disadvantaged people. Hospital wastes are also thrown on open dumps creating fresh hazards. x-ray plates, syringes, blood-soaked swabs and drugs threaten to unleash a whole range of new infections. Pickers at On Nooch show a high incidence of hiv infection, the virus linked to aids. Oils, paints, solvents, glues and other industrial wastes are increasingly found in these dumps. They contribute to the 'leachate soup' that lies in pools among the heaps of refuse. No one knows the synergetic effects of the combination of dust, vapours and liquids from diverse wastes on the people exposed to them for long periods.

Waste picking is an illegal activity. No developing country has, however, ever attempted to systematically suppress it and the numbers of pickers are only increasing. Although some waste pickers in India, Mexico, Thailand and Zimbabwe have organised themselves into co-operatives, to improve their earnings or bypass exploitative middle-men, health is not often given priority without outside assistance. The International Labour Organization has begun a project with picker children at Smoky Mountain and the World Health Organization has funded a study of the health of pickers in Calcutta. Health education and immunisation has been introduced in picker families by the Solid Waste Management Centre of Kathmandu, Nepal.

International organisations and medical researchers need to work together with charitable and community groups, adopting integrated services, health education and community development strategies to local circumstances. Broader research, to understand the specific risks associated with this work and to find out whether pickers develop immunities that protect them to some extent, must be conducted by medical establishments. The effort required to address the local perils of intensive waste recovery will come only when the many needs of waste pickers are widely acknowledged.