Nearly eight years after the Bhopal gas disaster, the legal battle over a settlement continues. But for the efforts of public interest agencies and public spirited advocates, the victims and the legal system would have been mired in a horrendous plight 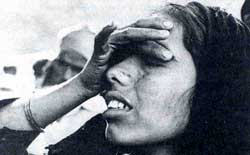 THE RECENT ammonia gas leak in a Haryana factory claimed 11 lives ans brought back the nightmare of the Union Carbide (UC) and Shriram gas leaks. Now, as the eighth anniversary of the UC disaster in Bhopal draws near, some questions remain: How were the victims compensated? What roles did the government and social organisations play? How did the courts acquit themelves? And, has Indian jurisprudence advanced at all, considering that in industrial disaster cases it was unsatisfactory until recently?

Following the oleum gas leak at the Shriram factory in Delhi -- exactly one year after the UC disaster -- then Chief Justice P N Bhagwati laid down a rule of absolute liability in such cases. He stated, "An enterprise, which is engaged in hazardous or inherently dangerous industry that poses a potential threat to the health and safety of the persons working in the factory and residing in the surrounding areas, owes an absolute and non-delegable duty to the community to ensure that no harm results to anyone on account of the hazardous or inherently dangerous activity that it has undertaken." He held further, "The enterprise in such case is strictly and absolutely liable to compensate all those who are affected by (any) accident and such liability is not subject to the exceptions that operate...under the rule in Rylands v Fletcher (1861-73) 1 AER 146 (HL). The measure of compensation in such cases must be correlated to the magnitude and capacity of the enterprise because such compensation must have deterrent effect."

This rule was applied usefully by the Madhya Pradesh courts in cases involving the Bhopal victims. The Madhya Pradesh High Court in Jabalpur, while granting an interim relief of Rs 250 crore (as against Rs 350 crore ordered by the district court), stated this was not a payment of interim relief without reference to the merits of the case but a payment of damages under the substantive law of torts on the basis of a more-than-prima-facie case having been made out in favour of the plaintiffs. The high court was astute enough to limit its decree to an amount that could be readily recovered within India from the defendants. That would obviate difficulties under US law, which does not accept the concept of interim decrees.

Judicial derailment On Union Carbide's appeal, the Supreme Court, with R S Pathak as Chief Justice, said it was moved by the plight of the victims to interfere under Article 136 of the Constitution. The move, unusual at an interlocutory stage, was justified by the "exceptional importance" of the case. Nevertheless, the impression that has spread is that the interference was motivated not so much by sympathy for the victims as by sympathy for Union Carbide.

The Supreme Court proceedings from the April 4, 1988, date of the Jabalpur judgement till the final disposal of the review petition in December 1991, are a dreary tale of judicial derailment, partially corrected later, but at great cost and suffering to the victims. It brings little credit to India's highest judiciary. The real mischief was done by what may be euphemistically described as a "sentimental and overhasty" decision of the Supreme Court in its February 1989 order, under which the Indian government and UC accepted the court's suggestion for overall settlement of all claims arising from the disaster. After UC agreed to pay US $ 470 million in full and final settlement of all claims, the court terminated all civil, criminal and contempt of court proceedings against the multinational.

What is the upshot? The Bhagwati ruling, unfortunately, has been put in doubt. The fear expressed about the ruling being unacceptable in US jurisdictions was unnecessary, because once the settlement was affirmed there was no need to invoke the jurisdiction of the US courts. Besides, it was clear from the record that even if the principle of strict liability (as contemplated by the rule in Rylands v Fletcher) was applied in place of absolute liability (as enunciated in the Bhagwati ruling) in the present case, UC's responsibility would be inescapable by virtue of the absolute control it legally exercised over its local (corporate) agencies. Bhagwati's insight lay in his assessment that multinationals never surrender absolute control of their local holding companies, but try and mask it. It is unfortunate if the later judgement appears to cast doubt on this salutary principle.

Fortunately, the unconscionable quashing by the earlier order of pending criminal investigations and proceedings against UC officials has been corrected. But the court has not taken sufficient note of the monumental assistance it has received from the victims' agencies and their counsel. Mention should also be made of those advocates who attended interminable proceedings on behalf of the victims without charging fees. But for these efforts, the victims and the law would have been in a worse plight.

A perturbing feature of the final judgement is the dissent of Justice Ahmadi from the majority direction that the Union of India shall make good any shortfall in the sum appropriated towards the damages judicially found due to the victims. Justice Ahmadi said he could not understand why the Union of India had to be liable. The majority held otherwise because the Union of India had violated the Bhopal statute by denying a hearing to the victims at the time of reaching the settlement figure with UC. Having accepted the role of trustee, under the grandiloquent title of parens patriae, the Indian government could not escape its responsibility towards the victims if it had agreed to too small a sum.

Such is the overall result of the Bhopal case. Interim relief will no doubt be paid to the victims on government account at a flat rate. The suggestion to have a higher slab for the seriously injured was rejected. The settlement amount is yet undistributed ans final adjudication is far off. Perhaps we should try to do better in future.

Danial Latifi is a freedom fighter and a senior Supreme Court advocate.