When two young people die in a highway accident, is it destiny or a callous and indifferent administration? 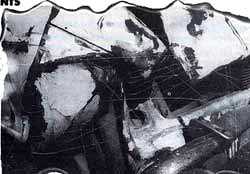 How does it feel to be told that if only your car had seat belts fitted, your 26-year-old son and 22-year-old daughter-in-law would be alive today? What would you do if you were told this? Would you bow down in acceptance before the Hindu priest when he said that it could not be otherwise, as it was destined to be so? It was destined that this couple, who had been married but nine months, would be out on the road between Alwar and Delhi at about 10 in the night.

It was also fated that the government, in its wisdom, called a narrow stretch of road running through villages a national highway and then forgot to enforce the minimum traffic rules on it. It was ordained that tractors with trolleys that plied on that road would have no warning tail lights. It naturally follows that the car would collide with one such tractor trolley in the dark and the youngsters would die.


And, of course, it was pre-ordained that the government of our country would be wiser than any other. It would, therefore, not legislate that cars be fitted with seat belts as a necessary safety measure. It might be obligatory to wear seat belts in other countries with wider and better regulated highways. But then they do not believe in destiny. They were not wise like us. How could our government have made seat belts compulsory, for if it had, would not my son and daughter-in-law had them in their car and lived, when they were destined to die?

She had the classic steering wheel injury, the doctor told me, and he had been thrown forward with the impact, breaking his cervical bone and damaging his brain. Both could have escaped with minor injuries if only the car had seat belts. Such an ordinary thing separating life from death -- a pair of seat belts! How much do they cost? Only about Rs 2,000.. But why should we bother about safety devices? We believe in destiny, do we not? The government may, in its wisdom, do away with the headlights next. After all, if tractors dragging long, deadly trolleys can ply without tail lights, why not cars without headlights? That would be true democracy, Indian style.

Do you want me to tell you what it feels like to be asked to excuse a callous administration for its negligence of road safety because it was fated that my young and beloved son and daughter-in-law would die? No, forget it. I do not want to burden you with my grief. Let me ask you a question instead. If you were an administrator and it were your children who had died because you did not have the sense or concern to ensure that cars be fitted with seat belts, how would you feel? Would you be able to live in peace, with the cliche that whatever will be, will be?

The administrators are, after all, men and women of flesh and blood, even if they appear as faceless beings to us. They, too, must have children of their own. If I was an administrator, would I ever forgive myself if my children were crushed to death on a highway, where I allowed tractors, trucks, bullock carts and cars to ply in the same lane, day and night, without safety devices or warning lights? How can I be expected to forgive the faceless men then?

But, for the moment, just tell me this. How would you feel if you were told that, even though your young son and daughter-in-law had died because of a callous traffic administration, you must not grieve because it was destined to be so?