The orphan of development

The river is almost totally absent in modern day discourse

Barrage, dam, embankment, flood, irrigation have a common thread a river. But it is symptomatic of our preoccupation with things 'developmental' that while we talk about dams, barrages, embankments and irrigation, the river is almost totally absent in modern day discourse. The river as a unique ecosystem on earth, the only 'watery' system that flows and hence creates a distinctive zone of influence around which plants and animals of amazing diversity thrive, has been eclipsed from popular imagination.

Rivers are not just unique ecological entities, they are also key economic resources. The Nile, Tigris, Indus and the Hwang Ho cradled ancient civilizations. They were sources of water, food, transportation, and spiritual pursuits.

Water in chains
The advent of industrial revolution in Europe some three hundred years ago, turned rivers into dumping grounds for industrial waste and human refuse. Use of hydropower for generation of electricity and canal irrigation for agriculture came to occupy the centrestage of humankind's developmental aspirations. Damming rivers and raising embankments on their banks became popular engineering feats. The river as a free flowing natural entity lost its identity and paramount importance.

Soon enough, the ill effects of engineered manipulation of rivers became apparent when civil society groups began to question the wisdom of such 'developmental' activities. In India, the Narmada and the Tehri dams became symbols of civil resistance to large dams. But these civil society movements made a strategic miscalculation they focussed on the dam and all the ills it represented, rather than the river. An opportunity was lost to not only seek answers to some fundamental questions on the wisdom of harnessing rivers, but also to develop a large constituency for rivers.

Kosi 2008 has now, unfortunately in the form of a human tragedy, offered an opportunity for a dispassionate debate and subsequent action that might reinstate the river at the centrestage of discussion. The country needs to first understand its rivers, their dynamics, and need of a holistic approach towards them. Isn't it ironic that while we have a Rashtriya Barh Ayog (National Commission on Floods), a World Commission on Dams and a National Water Policy there has been no effort to enunciate a national policy for the country's rivers.

So our rivers are treated as orphans. Somewhere it is the irrigation department that has control over a stretch, somewhere it is the forest department, at other places a developmental body like the Delhi Development Authority and at some others, it's the municipality that controls the river.

For want of policies including one related to land use, river flood plains are increasingly being seen either as real estate development opportunities or getting encroached upon by people, who have nowhere else to go.

The muck receiver
Drains from urban settlements on the river banks continue to spew liquid and solid wastes into the rivers turning them into little more than a sewage drain. The fact that decades-long projects like the Ganga Action Plan and the Yamuna Action Plan have failed to make any notable improvement in the river's health despite devouring crores of rupees is a sad commentary on the directionless state machinery. 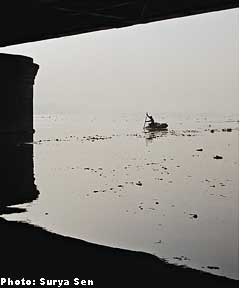 Is there a way forward? Yes. A national commission on rivers headed by a sitting or a retired judge of the Supreme Court with membership from experts a number of fields including the social sector should be appointed. The commission should have a mandate to develop a comprehensive understanding of the country's rivers.

Till the commission completes its task, its recommendations publicly debated and a consensus emerges, no developmental initiative should be permitted on a river or within the flood plain of any river in the country. This could mean a moratorium on dams, barrage, embankment, riverine townships. But it will bring the river back in popular discourse.