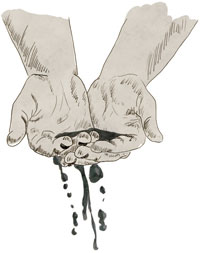 Maha Kumbh in Allahabad has perhaps no parallel in terms of the sheer size of the congregation. In less than two months over 100 million people are expected to come to this city, which sees the confluence of two rivers of India—the Ganga and the Yamuna. People come to worship on the banks of the Ganga. Even as they celebrate the river it seems they don’t see the river, but only the ritual.

The fact is that this “mela” is about how the Hindu religion—and I believe all religions—is based on a deep understanding of and respect for nature’s strength. But we now worship without reason. So, people can take a dip in the polluted river but still believe that the dirt, the filth and the plastic that swims around them, will not defile the river’s properties. Our strength has become our weakness.

It is a fact today that the Ganga and the Yamuna are polluted beyond acceptable levels. But why should we be surprised. We mercilessly take clean water from our rivers and return sewage and industrial waste. In the upper reaches, the Ganga does not even flow in many stretches because we take water for generating hydropower. The tunnels for run-of-the-river projects divert the rivers and as soon as they are released, they are diverted again. The engineer-designers have no concept of ecological flow to ensure they take water for power only after the river has enough to fulfil its environmental, social and livelihood needs. Then as the Ganga and the Yamuna reach the plains, we take every drop of water for irrigation and drinking needs. We suck our rivers dry. Then as worshippers, we put plastic into the river and everything else that should not be there. We do all this and then still believe we have rivers to worship. Or we pray to a dead and dying river but pretend otherwise.

It is clear that for the occasion of Maha Kumbh the government has made huge efforts to clean the two rivers, with a little success. These steps tell us that it is possible to reduce pollution in the Ganga and all other rivers of the country. We just have to learn the art of innovative pollution management.

This is what the government has done to contain pollution, albeit temporarily. First, more water is allowed to flow in the river. This is critical because without dilution there will be no assimilative capacity in the river. Rivers without water are drains. We should remember this. It is also a fact that this “release” of additional water deprives farmers upstream of irrigation; cities and industries of water. But it is also a fact that we cannot continue to plan for rivers without water. All users must be forced to plan for water needs based on what the river can spare, not what they can snatch.

Secondly, Allahabad has built sewage treatment plants. But then it is not as if it was desperate to clean the river. Let me explain.

In all cities of India, without exception, there is a mad rush to build sewage treatment plants. But we forget that cities do not have underground sewerage systems to intercept the sewage and transport it to plants for treatment. In this way, the built plants are white elephants—call them temples of modern India—which are built but not used. In all cities built sewage treatment capacity is underutilised. But engineers and planners have the uncanny ability to make us forget these details and be happy. They assure governments that the underground network will be built and pollution will vanish.

But the network is not built. Some sewage is treated and the bulk flows into drains and into the Ganga and the Yamuna. Worse, the little sewage that is treated (at considerable expense) is then released into the same drains that carry untreated effluents. The end result is pollution. It was in mid-1980s that the government of India launched an ambitious programme to clean the Ganga. Under this programme, sewage treatment plants were built. City engineers are still catching up with building the sewerage network for the plants to work. For the Kumbh, the government has done something smart. It intercepts the untreated sewage from the open drain and conveys it to the treatment plant. Simple.

Thirdly, the city is trying to experiment with “affordable” ways of treating sewage—by using bio-remediation techniques. The preliminary reports suggest that this system is working. The key is to measure its effectiveness carefully and deliberately.

Fourthly, the government has come down hard on the polluting industries—mainly tanneries and distilleries—on the banks of the river. The question is why enforcement against pollution happens only when there is a crisis; it should be happening in ordinary times.

The end result is that there is a temporary relief against pollution. Now the challenge is to keep the river clean. This will need more than government’s will. This will need a collective wish. This will not happen till Indians join the dots—faith is connected to the river not by accident or by ritual but by reason and rationale.