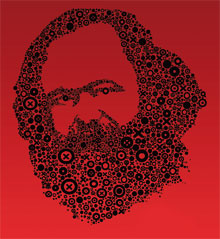 There is outrage, fury and indignation—but no revolution, of course—in the rarefied world of Marxist intellectuals. A whole lot of them are in a lather over the taking down of Marx and Engel’s collected works from a popular Marxist website because of copyright issues. Enraged comments, mails and an online petition have shaken the sedate ecosystem of Marxist thinkers after a little known radical publisher, Lawrence and Wishart (L&W), rattled the foundations of their economic thought.

The rumpus is over a foundational set of book on Communist politics, Karl Marx, Frederick Engels: Collected Works. About nine years ago, the London-based publishers of these ponderous volumes, 50 in all, had allowed Marxist Internet Archive (MIA), one of the best known repositories of Marxist literature, to republish Collected Works in part. MIA, also known as marxists.org, offered 10 of the 50 volumes that had been digitised free online. But towards the end of April, L&W asked MIA to take these off the website by May 1 because it was planning to offer a digital version of the entire Collected Works to university libraries worldwide. All hell broke loose over what was termed the triumph of capitalism over Marxism in the heated rhetoric that poured into cyberspace from supporters of MIA and other liberals. They were particularly incensed that the publishers had sought to enforce their copyright claim on the holiest of holies—May Day!

L&W, at one time the publishing house of the Communist Party of Great Britain, clearly, did not expect the roasting that it has been getting. It has sought to defend itself in two ways. First, it claims, the monumental work has been put together with enormous labour and scholarship and translated into English—work that took three decades and more. Second, it rubbishes the claim that it is a capitalist monopoly as portrayed by it critics. Describing itself as “independent radical publishing,” that survives on a shoestring, L&W says it makes no profit except that required to pay “a small wage to its overstretched staff” and ploughs back most of its returns into radical publishing projects that includes an expensive programme of free e-books.

It declares that “without L&W, the full collected works of Marx and Engels in English would not exist” and more pertinently, “without the income derived from its copyright in these works, L&W would not exist.” But is the publishing house complaining too much? A search for the antecedents of Collected Works reveals that L&W cannot claim all the credit for the tomes. Involved in their preparation were International Publishers, Progress Publishing Group Corp., Moscow, and the Russian Independent Institute of Social and National Problems. Besides, as David Walters, writing on behalf of MIA, points out, the first 10 volumes were published between 1975 and 1978 and, therefore, L&W would undoubtedly have recovered their costs by now.

Mainstream US media has been having a field day in what they see as an amusing fight between radicals that is “so uncomradely”. But they have sidestepped fundamental issues that the controversy raises. If only a small part of Collected Works was hosted online by MIA, should L&W have sought its take-down? The argument of the Left brigade is that the 10 volumes would not have posed any competition to the British publisher. But libraries may have baulked at buying a digital version, part of which was freely available. L&W contends that by selling the Collected Works to public libraries, it will ensure a public presence of the works in the public sphere. “This is a model of commons that reimburses publishers, authors and translators for the work that has gone into creating a book or series of books.” That may be true but it can also be argued that libraries are not entirely public domain because these restrict access to those with academic status at a university that is subscribing to the service. Ditto for readership of learned journals.

The larger question is if the Marxists are, indeed, demanding the rewards of a free market consumer culture while professing to follow communist ideals. As L&W complains, the demand of its critics reflects “a consumer culture which expects cultural content to be delivered free to consumers, leaving cultural workers such as publishers, editors and writers unpaid, while the large publishing and other media conglomerates and aggregators continue to enrich themselves through advertising and data-mining revenues and through their far greater institutional weight compared to small independent publishers”.

Tailpiece: Technology may have defeated L&W almost instantly. Several mirror sites of MIA have appeared and these are offering pdf files of the entire Collected Works online. Surprised by what they call the online response, the publishers are sounding more conciliatory. They are now “considering what we can do to meet the desire for greater access”.