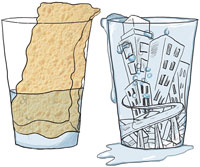 We were standing at the edge of what looked like a swamp—grass and pools and streams. On one side was heavily barricaded land with high walls, barbed wires and armed security. A board read: East Coast Energy, Kakarapalli. This was where a bloody battle had taken place a few months ago. People protesting the takeover of their wetland were shot at and three lost their lives. Now the site of the 2,640 MW thermal power plant is under siege—locked and in court.

I could see from the faces around me—a group of some 50 journalists from leading newspapers from across the country—that none of us could understand this battle. Why were people fighting for this piece of water-land, which was neither private nor rich agricultural land? The people, mostly fishers, were obviously poor. Then why were they on a hunger strike, which had now crossed a year? Why were they so belligerent that they were willing to lay down their lives?

We then met a group of farmers from a neighbouring village. In Sompeta also a proposed 2,640 MW coal power plant—this one by the Nagarjuna Construction Company—was similarly fought. Here also a bloody battle took place. Here also people lost their lives. Here also the matter is in suspension; the environmental clearance has been cancelled. But the company wants the site. The people say they will fight to death.

These are today’s battles. I could see that all of us were moved, but unable to comprehend what was happening.

On our drive to the village through the district of Srikakulam, we were shown sites proposed for a nuclear plant, a pharma and chemical city and numerous thermal power projects. It was a massive takeover and understandably so. This is coastal India, where the land meets the sea. This land frontier is ideal for new growth projects. There is ample water for huge cooling needs of nuclear plants; there is easy access to imported coal for thermal power projects and chemical plants can dump their toxic waste into the sea and not have to invest in expensive treatment systems.

There is another advantage. Government holds large parts of land, which means companies do not have to go through messy land acquisition. Better still they get property at throwaway prices. This land is classified variously in government records, from tampara (swamp) to peramboke (wasteland) to bela (wetland). Whatever the classification, it underscores that the land has no real economic value, hence can easily be given away at cheap rates.

This is where policy gets practice fundamentally and fatally wrong. This is not useless wasteland as the revenue office described it when it gave it to the thermal power company at a pittance. This is highly productive land, both in terms of its ecological functions and economic uses. But we cannot see it or won’t because it is not in our interest.

Just consider. This dead swamp is a living sponge, which soaks water, reducing the intensity of floods; the delicately maintained freshwater balance reduces the advance of salinity, which would infiltrate groundwater and ruin drinking water sources. This is a living ecosystem. It plays critical life functions.

Ask Kakarapalli farmers. At first, they were not against the thermal project. Many even sold their land to the developer. When construction on the swamp started, the land was raised to build the foundation of the project. Next year rains flooded their fields. Now the farmers have joined the protest with fisher people. They understand the value of this “swamp”.

These “wastelands” are fertile because they provide livelihood benefits. In Sompeta the bela provides water for irrigation and drinking. In both the villages fish catch is an important economic opportunity. It is another matter that the fishers in our eyes look poor and desperate for a makeover. But this is their life and the water body is their common asset, which provides them a job and gives them money to put food on the table. These benefits cannot be discounted.

The problem is that today there is no policy that protects the interests of water. The environmental impact assessment has limited brief for water issues, or so it would seem. In Kakarapalli and Sompeta the appraisal reports termed the land barren and non-fertile wasteland. The data was collected during summer when water is at its lowest level. It was easy to not see water for the land.

There is no legal protection for water bodies as water bodies. The Forest Conservation Act provides protection for forests and so incidentally protects the land where streams and rivers are born. But this is not deliberate. Today the water structure is invariable common property, which can be taken apart. Its land use can be changed in revenue or municipal records at the stroke of a pen. It can be mutilated and dismembered.

The people of Kakarapalli and Sompeta are teaching us a lesson in future survival. Listen to them before it is too late. There should be no choice here—water and the life it gives are more important than any industry.