Life in a radiation zone 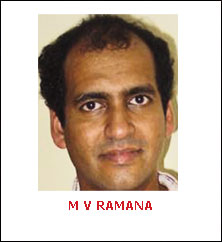 The recent incident involving a large number of workers at the Kaiga Atomic Power Station in Karnataka receiving substantial radiation doses due to drinking from a cooler contaminated with tritiated water (containing a radioactive isotope of hydrogen) is disturbing for a number of reasons. The nuclear establishment has tried to trivialize the import of this event. It has even impressed on Prime Minister Manmohan Singh that it was only a “small matter of contamination”. In turn, Singh has tried to mollify public fears by declaring there was “nothing to worry”. However, what happened at Kaiga should be viewed in light of the catastrophic potential of nuclear technology highlighted by many accidents and incidents of safety lapses at facilities run by India’s Department of Atomic Energy (dae) and its sister institutes.


Union minister of state for science and technology Prithviraj Chauhan said the incident was caused by a “disgruntled employee” who mixed tritiated heavy water in a water cooler. This reflects disaffection among the workforce. There is a history of tension between workers and lower level staff and the management at various Indian nuclear facilities. This tension was articulated indirectly in a January 1980 memorandum from the Bhabha Atomic Research Centre Officers’ Association that stated, “Many important facts like those concerning health hazards...and service conditions of individual scientists have been kept secret not only from the public but also from the majority of the scientists. The latter are alienated from the management.” If this is the condition of officers, then the plight of lower level staff will only be worse.

As an example, consider what happened in January 2003 at the Kalpakkam Atomic Reprocessing Plant. Due to the failure of a valve six employees were exposed to highly radioactive waste. Although the plant was five years old, there were no radiation monitors or mechanisms to detect such failure. That high-level waste had come into an area where it was not supposed to be, and the resulting exposure to the employees, was recognized much later.

Despite a safety committee’s recommendation the Kalpakkam plant be shut down, the management continued operating it. The workers wrote to the director placing 10 safety-related demands but there was no response. In desperation, the union resorted to a strike. The management transferred some key workers involved in the agitation and threatened the others with similar consequences. When the fearful workers returned to work the management said if the place had not been safe, the workers would not have returned. Finally, the union leaked information to the press. Once the news became public, the management grudgingly admitted this was the “worst accident in radiation exposure in the history of nuclear India”. But even then it tried to blame the workers for their “over enthusiasm”.

There were earlier struggles between workers and management of nuclear energy institutes over safety. In 1997, workers at the Madras Atomic Power Station went on strike for 25 days after the management suspended five workers who refused to do maintenance work in areas with high radiation levels.

Amongst all electricity-generating technologies, only nuclear power comes with the possibility of catastrophic accidents with consequences spreading across space and time. In 1986, an accident in Chernobyl in Russia exposed all countries in the northern hemisphere to radioactive fallouts, which will remain hazardous to health for centuries. Despite improvements in reactor technology, the probability of such catastrophes remains greater than zero.

Nuclear technology is unforgiving of errors. Researchers studying organizations that operate such hazardous technologies have identified good management practices that are necessary—though not sufficient—for safety. Important amongst them is robust cooperation between management and workers on safety issues—absent within the dae. The department also exhibits other characteristics that are a source of risk, including not learning from previous failures. Compounding all this is the problem that both the dae and the Nuclear Power Corporation exercise administrative powers over the Atomic Energy Regulatory Board.

All of these imply that what happened at Kaiga is cause for worry.