One town in Europe has shown how to host a major world sporting event, with all its attendant chaos, and still avoid environmental devastation 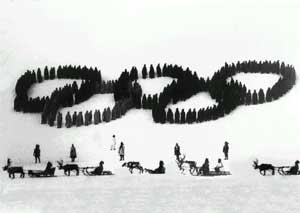 there was a recent joke doing the rounds in Lausanne, the Swiss headquarters of the Olympic Games bureaucracy. Question: "Which would you rather have -- the Winter Olympic Games or a swarm of locusts?" The answer: "A swarm of locusts any time because the year after, the environment will recover."

Salt Lake City, us won the pleasure of this modern blight for the next time and great was the wailing among the defeated rivals. The most piteous were the cries from Sion, in the Rhone Valley, noted for Swiss black cherry jam. Here, the loss of the anticipated economic benefits of new construction, federal subsidies and world publicity, were bemoaned as if there had been a real robbery.

This was the area where Europe came closest to emulating Brazil in the way they deal with environmentalists. One of them was beaten to within an inch of his life for his activism, and the subsequent death threats made him leave his mountain village and escape to another canton -- ironically -- Lausanne. The police never found his attackers. The suggestions that they might have tried harder were unusually vigorously protested.

Lillehammer, a small town in the middle of Norway's high plateau, was told in September 1988 that it had won the Winter Olympics for 1994. The local environmentalists moved quickly to counteract the potential ecological disaster. They made their way into the organising bodies and immediately started to gather the facts and do the field work to help them fight for a greener Olympic Games. Their success was good for Lillehammer and it now begins to look as if it will prove to be good for the Olympic Games, winter or summer, in the years to come.

Gathering the facts was inexpensive because Albertville, in France, was to host the Winter Games just two years in advance, in 1992, and there was already much acrimonious debate about them. Normally, the Winter Games are four years apart but this time they were advanced so that they would henceforth find themselves in the middle of the four year gap between the normal summer Olympics. The world of sport addicts would thus have some sort of Olympic fix every two years from then.

The organisers, therefore, had a unique opportunity to identify mistakes being made in Albertville just two years ago. There was another opportunity, too, and that was to see the ruins of an earlier Winter Olympics held close to Albertville, at Grenoble, which hosted the plague in the '60s.

However, it has to be said that Norway was intrinsically more welcoming to environmental perspectives than other host countries. The Prime Minister, Gro Harlem Brundtland, had chaired the World Commission on Environment and Development and the Nordic government had supported the environment movement at the international level since the un Stockholm Conference in 1972.The Norwegian ministry of environment appointed its own internal Olympics coordinator and soon found a non-governmental voice to listen to. This was pefo or 'Project Environmentally Friendly Olympics'. pefo was spawned by the Norwegian Society for the Conservation of Nature, which had opposed Lillehammer's bid for the Olympics but changed strategy when the positive decision was announced. pefo took on the constructive role of an environmental watchdog and began to pressure the sports community and the municipal planning authorities to take more account of environmental issues. However, it was the government itself which introduced the concept of making Lillehammer "the showcase for environmental policy".


A small group of people from various bodies with a role in the organisation of the games, thus made their pilgrimage to Albertville and other former Olympic sites, with the feeling that the lessons learnt would perhaps be applied. They came back via Geneva, hoping to find some supportive souls among the gaggle of environmental experts working in various international organisations. All they found was a bemused audience for the stories of what they had seen.

The ruins of Grenoble's Olympic site resembled those of ancient Rome when Europe first started taking an interest. The ski jump, seemingly rather higher than the walls of the Colosseum, was made of solid concrete but had cracked and now harboured romantic trees springing from its soaring curves. The forest had overgrown huts which had never been dismantled and the disused roads had crumbled.

In the new host town, Albertville, the talk was mostly of the benefits of a new autoroute along the river to link the area to the French network in order to bring in more skiers for the years to come. The outlines of the notorious Brides lees Bains bobsleigh run were already discernible. This unspoilt old mountain village had the concrete run snaking through its centre on stilts. In case nature failed to freeze, an ammonia refrigeration plant was constructed downtown and it subsequently leaked. For a press opening later, the media were issued gas masks. For the inhabitants, the memory lingers on. It was said that citizens ended up in a us $6,000 debt.

When the Norwegians got back to Lillehammer, they were full of sober thoughts. The commercial pressures were going to be hard to handle but a spirit of cooperation and compromise could perhaps create something rare -- the resolution of environmental problems in a non-adversarial style. There was a realisation that if Lillehammer really could make itself "a showcase for the environment", with the world watching it on tv, Norway might not just escape the bad effects of the scourge itself but be a beacon to others in the years to come and signal the way to Green Olympics, summer as well as winter.


A word of explanation is perhaps in order for readers who may not be aware of the finer points of commercialisation of winter sports. In the time of a former Olympic president, Avery Brundage, the last defender of Olympic amateurism (it seems as far back as the Jurassic), skiers were discouraged from even letting the make of their skis appear in their victorious cavortings. Today, every surface in view carries an advertisement. Even for something as boring as the bobsleihg run (where men built on the style of rugby forwards push the sleigh on the flat for five or six seconds to get it going, and thus determine who will win at the end of the run half a mile further on) a computer software company runs a shingle. The tv cameras stared at "Word Perfect" as the breathless commentators awaited the blurred rumble of a four-man plastic bullet doing 113 kmh. Ski competitions, like the downhill, slalom or figure skating with the same advertisements, are the weekly staple of winter sporting tv; and a serious question arises in the mind of any environmental dreamer. Would it really matter if the winter Olympic Games were abolished?

After all, you see the same people doing the same things any other week from November to March. It is just that the best get gold or silver Olympic medals instead of world competition medals made of the same metal. Some sports, like the bobsleigh, are virtually unique to the Winter games and others, like the militaristic biathlon, with accurate rifle shooting mixed with cross-country skiing, are hardly appropriate to the peace promoting purposes of the Olympic movement. Would they really be missed?Abolition is an ideal speculation, I suppose, since too many interests now cluster around the event and the winning town celebrates as if it had just got a World Bank loan. Better be grateful for Lillehammer's initiative and spread the word. After the amazingly green games, Lillehammer recorded it's experiences in a recently released little booklet published jointly by the Norwegian Government and the un Environment Programme.

The town now symbolises the integration of commercial and environmental concerns and is beginning to establish a reputation of being the place to go to if you want to debate environment, sport and tourism. It has just hosted a well attended conference on this thorny subject. A Lillehammer consultant has just been helping the Australians with the summer Olympic Games. There are even sacred texts from the original white paper, "Strive for Olympic development that is as environmentally friendly as possible. Development that stresses accommodation to the natural landscape, cultural heritage and regional character, will also be instrumental in the long term in preserving and developing qualities attractive to the travel and tourism industry."