Littis with a twist of taste 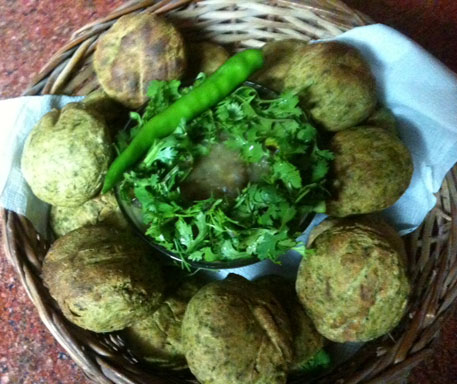 At a glittering wedding reception in Patna, all arrangements seemed perfect and everyone looked happy. The only discordant note was the rants  emanating from a particular food stall. Guests were complaining that the state’s “national” dish—litti—looked offensively green instead of the usual brown colour.

Majority of the guests refused to even touch these strange-looking green littis. A well-dressed guest, deprived of his favourite snack, accused the cook in angry tones of having mixing artificial colour to it. Bulakan Singh, the cook, was nervously glancing at the untouched platter. Littis, made from wheat flour dough and sattu (roasted gram flour) and eaten with mashed potato/brinjal, is an all time favourite of people of Bihar (see box for recipe).

“Please, have it,” Singh pleaded with the guests, only to find the guests look even more suspiciously at the green spherical objects.

Suddenly, a plump lady put in an appearance and approached the stall. She asked Singh in a rebuking tone, “Why are these littis green when they should be brown?”

Showing his tobacco stained teeth, Singh replied, “madam, these are spinach-littis.” The lady rolled her eyes and beckoned the rest of her chirpy friends as the cook pleaded with them to taste the littis.

The group of women took one litti on a paper plate, examined it closely, and took small bites from it. “It’s very good and delicious,” they exclaimed in unison. The women then motioned to their husbands to join in. Soon a crowd gathered around the stall, and in 20 minutes flat about 200 green littis vanished from the platter. The guests, it seemed, could not have enough of it.

A large group of women surrounded Singh. They had two questions for him: how did he add spinach to the litti and from where did he learn to make it?

Singh said he is a migrant labour who works in Punjab. This year he had to stay back because his wife is expecting a child. He narrated how he made the innovation.

His employer, Kuldeep Singh, a well-off farmer in Jalandhar, was pleased by the hard work put in by the labourers and gave them a half kilo of pure ghee (clarified butter). The labourers decided to celebrate the occasion by cooking littis and smearing ghee on them.

But they realised that they did not have wheat flour to make dough for the litti. They approached Kuldeep for wheat flour. Kuldeep’s wife was irked by the demand of the labourers and handed over the previous day's left-over dough which had been kneaded with spinach.

The labourers decided to drop the plan to cook littis. Singh dissuaded his fellow labourers from dropping the plan, saying, “dough is dough, we can make litti from the spinach-flour”.

Singh then stuffed balls of the dough with sattu, while others started making chokha or the vegetable mash.

One of the ladies listening to Singh at the wedding reception interrupted his narration. She sounded sceptical about Singh's claims and said she had seen similar littis at an eatery in Patna. Other women expressed similar doubts; an argument ensued. As the party continued, the guests were in agreement about one thing—they gave their thumbs up to green litti.

Once considered a poor man’s food, the litti has now gained acceptance in the upper classes. One is certain to find litti stalls at wedding parties; even upscale hotels in Patna host events like litti festival.

Litti shot to fame after former chief minister of Bihar, Lalu Prasad Yadav, who also served as Union railway minister, allowed stalls of litti at railway platforms. The former minister also took a bagful of littis during his hectic election campaigns. He made no exception in serving littis to high profile
foreign dignitaries.

Health benefits of litti are widely known. The sattu used in the stuffing helps to keep the intestine healthy and is also beneficial for diabetic patients. The spinach litti has further added health benefits. Spinach is a rich source of iron and vitamin K.