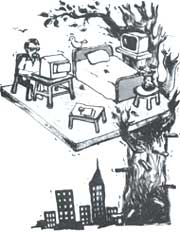 ONE aluminium can of coca cola, if recycled rather than thrown away, saves enough electricity to run a television set for three hours. Need we calculate the magnitude of energy that is consumed by the unending chain of metal clad, steel reinforced artifacts - our buildings? Architecture as a symbiosis of the natural and the humanmade and the architect, bear the responsibility for maintaining the equilibrium between the built and the natural environment.

Every built object implies an alteration to the landscape. Wooden logs mean a forest cut, stone boulders mean a hill flattened and bricks mean earth excavated. Knowing the finiteness of resources and recurring implications of its consumption, all development requires to be sustainable. Sustainability is understood as self-reliance and ability to absorb environmental and other impacts of development in the present times, without degrading or depriving development opportunities for the times to come. In other words, it is a recognition of the fact that environment and development are not mutually exclusive but are interdependent and as such, can become mutually reinforcing. Resource management and resource generation, therefore, become the fundamental concerns of sustainable development. Resources in architectural applications include humans, machines . and materials. Every architectural decision, from its site location to surface finishes, calls for an in-depth understanding of its environmental implications and complete comprehension of the long-term consequences. Issues pertaining to design, technology, energy, land, water and vegetation become critical for sustainable architecture, both for their optimal utilisation as well as resource generation. Each of these elements can be seen as productive culture.

• Efficient design: this implies efficient utilisation of space by optimising resources. Building design, by way of its siting on the land, orientation to sun and wind, massing of the built and the unbuilt, organisation of activities, size and scale of spaces among other things, can favourably influence not only living comforts, but also resource consumption and energy intake.

Sharing the walls between adjoining buildings does not simply reduce consumption of construction material, but also cuts down surface exposure, making the building less susceptible to external forces of climate. Splitting the total built-up area into several floors also does the same. Varying levels and volumes in a space bring down energy consumption by nearly 10 per cent. Addition of a floor above cuts it down to the order of 20 per cent while sharing the walls on two sides reduces it to nearly half.
Similarly, the built surfaces and openings oriented in accordance with the movement of the sun and wind ensures comfort conditions within the building through controlled shadows and the regulated flow of breeze. Turbulences created between two tall buildings or sun penetrating through large westwardly windows in summer afternoons, exemplify that buildings created regardless of climatic considerations can create adverse effects. The better the naturally-created comfort conditions, the lesser would be the need for mechanical devices and implicit energy consumption. • Appropriate technology: efficient design coupled with appropriate technology ensures savings in cost of material as well as in energy consumption. Use of locally available material reduces fuel consumption through reduced trans- portation requirements besides lessening the environmental imbalances while these materials are being procured. Labour- intensive rather than machine-oriented construction processes are understood by, and accessible to, even unskilled workers, thus creating large employment opportunities.

In situ construction of'support' structure combined with on-site prefabrication of'infill' is a fruitful combination, gaining favourably from both without involving expensive transportation, complex machinery, or large capital. Apart from appropriate building systems and construction techniques, even the very selection of material leaves much to be desired. To realise the energy implication of building material from its procurement to production is also important.

Energy consumed while preparing soil blocks is 50 per cent less than that consumed by burnt bricks. The energy cost of cement is nearly five times that of burnt clay bricks, while that of mild steel is 15 times, PVC 60 times and aluminium nearly 80 times. Similarly, brickwork in cement mortar consumes twice the energy than a stone wall set in lime, and making reinforced cement slabs takes over four times the energy consumed by mud blocks. Asbestos poses yet another kind of environmental problem. Its suspended particles in the air, emitted during its manufacture or use in service ducts, can prove carcinogenic. All these issues point towards the need for careful selection of material and techniques.

• Renewable energy: energy consumption is not simply confined to the procurement of material or production of components, but even includes subsequent maintenance of buildings and comfort conditions within. Climate-conscious designs achieve near comfort conditions by absorbing or amplifying the positive elements of the external physical environment through passive means without energy-intensive implements. In such an approach, the emphasis is on resource conservation.

The other approach to energy-conscious design is of active interaction with nature where resource generation is the basic intent. The built structures are oriented to maximise their exposure to such natural elements as the sun or wind, which are seen as a productive resource. Structure such as wind mills or solar panels store and transform breeze or solar radiation into forms of energy. Electricity or heat thus produced becomes a productive resource that has been generated and renewed.

• Water harvesting and recycling: water is another precious resource often in short supply and yet wasted. Cherrapunji in Meghalaya, the wettest spot in the world, today faces a drinking water problem. The problem certainly does not have as much to do with the inadequacy of the resource as with its management.

Earlier, rainwater used to be harvested by digging a series of tanks to store stormwater from plains and streets of villages, or by storing rainwater from roofs and courtyards in basement storage tanks of every house. The water channels of Mandu (Madhya Pradesh) or Sikri (Uttar Pradesh) and the tank system of Pondicherry or Jodhpur (Rajasthan) are reminders of such ingenious practices of integrating rainwater harvesting with architecture.