Locking horns with the bull 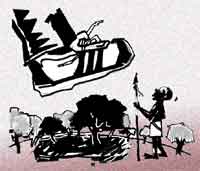 there is no doubt about the fact that some of the most prominent Western corporations are beginning to get the message about corporate responsibility. After facing heavy criticism from social activists on subjects such as the setting up of unregulated Third World 'sweat shops' and the use of child labour in the manufacture of pro-ducts like Nike shoes, a new "corporate code of conduct" has been announced by the us government. The code, which is voluntary, would reward corporations adhering to child labour and minimum wage laws and a maximum 60-hour work week, with a "no sweat" badge for their products. While voluntary corporate codes may work in the case of highly visible companies like Nike, it is a very different issue for industries that are hardly seen or heard.

The issue of toxic waste dumping in the Third World captures the dark side of industrialisation better than any other.Enforcing the Basel Convention- which attempts to ban the export of toxic waste from Organization for Economic Coope-ra-tion and Development ( oecd ) nations to non-oecd countries- requires more than just words on paper.

Even though India signed the Basel Convention and is also bound to ratify the ban on toxic waste imports for recycling, doing so hardly solves problems for those employed by the Indian zinc ash recycling industry. Zinc ash- imported from countries such as Australia and the usa- is recycled into zinc sulphate fertiliser which is then sold to poor farmers. Much of the recycling is carried out in shanty smelters governed by absolutely no environmental safeguards, the owners of which take no precautions to ensure the health of their employees.

"The process is very hazardous", says Ravi Agarwal of Srishti, a New Delhi-based ngo which has been campaigning for an end to these toxic imports. "The concentration of contaminants like lead, cadmium and sometimes even arsenic and mercury are higher than they should be in the final waste sludge, which is then disposed of indiscriminately. There have been no studies conducted to show if any of these contaminants remain in the zinc sulphate which is finally used as fertiliser."

The problem of enforcement remains a problem. On April 10, 1996, the Delhi High Court imposed a complete ban on toxic waste imports. But despite the order, Srishti and co-petitioner World Wide Fund for Nature (India) were back in court a year later. This time they complained that since the ban, over 15,000 tonnes (t) of lead waste and 12,000 t of zinc waste had been illegally imported from over 40 companies.

The issue of hazardous waste dumping is hardly the only area in which there is a need for international regulation of multinational corporations. In the case of forestry, Japanese and Korean companies have built up an unenviable record in getting the cheapest wood from countries with the lowest environmental regulatory standards. The recommendation of the Brundtland Commission- whereby a company operating in a country with lower environmental standards than its home country, should operate according to the higher environmental standard- is routinely ignored.

Such ideals go against the grain of modern corporate governance. The main legal requirement for publicly-traded companies in North America and the uk is very simple- to make profits for their shareholders. In the casino of international finance, shareholders are gamblers who regard the companies in which they "invest" purely as a means to make windfall profits. Moral considerations about the plight of workers or environmental degradation resulting from the companies' operations are lost in the crazed atmosphere of the stock exchange. In such a climate, international agreements like the Basel Convention- even with a total ban on the import of toxic waste for recycling- are at best a partial solution. The spirit of the Brundtland Commission requires a more far-reaching reconsideration of the fundamental ways in which corporations operate. This would also have to be done at the level of the un , with countries committed to bring their company law into line with a new set of principles.

An important chance to change the basic model of corporate governance is presently being thrown away in India. The new draft code of corporate conduct being considered by the Confederation of Indian Industry chooses the deficient Anglo-North American route of placing the emphasis on share-holders and making it the prime directive of the company to enhance and improve shareholder value.Other approaches which lay stress on the "stakeholders" rather than "shareholders" are being ignored.

A shift in emphasis is important and will benefit industry as well as the communities in which they operate. As the Indian legal system is increasingly seen as the only way to force polluting companies to clean up their act, corporations which can avoid the costly process of defending themselves in court will have a great advantage. A corporate culture which encourages participation of the concerned stakeholders - that is the community, workers, shareholders and management - would go a long way in achieving this.