Victims of hormonal drug, Primodos, in UK have been seeking justice for over 40 years now

Victims of hormonal drug, Primodos, in UK have been seeking justice for over 40 years now 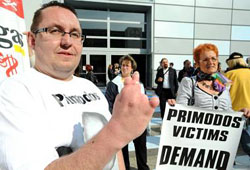 It is arguably the longest struggle to bring an errant pharma company to book. The victims in this case are in their forties and have been living with the consequences of their mothers being prescribed a harmful drug when they were still in the womb.

On Tuesday, the voice of these thousands of victims of the drug—Primodos—reached the UK Parliament when Yasmin Qureshi, Labour MP from Bolton South-East, presented a petition to the House of Commons. She also requested Prime Minister David Cameron to meet around fifty victims who were present outside, which he refused, saying he was “scared” to meet them. But he had given positive indication earlier that there would be a public probe into the matter.

Those who reached Parliament were among the large number of people who developed permanent disability because their mothers were prescribed a drug, Primodos, also known as “The forgotten Thalidomide”. It was then manufactured by German pharma company Schering, which was subsequently taken over by the chemical and pharmaceutical firm, Bayer, in 2006.

The drug was prescribed for hormone pregnancy tests in the 1960s and ’70s; at least 1.5 million women were prescribed the drug. The premise for administering the drug was that if a woman is pregnant, high doses of progesterone, contained in Primodos, would be absorbed by the body; otherwise, it would trigger menstruation. The women were not informed about the side-effect of the drug on their unborn babies.

Many women suffered instant miscarriages and thousands of babies were born with various deformities. These victims who are now middle aged are progressively facing more health problems.
The victims and their supporters have formed the Association for Children Damaged by Hormone Pregnancy Testing and are demanding justice for victims.

Victims of foul play, too?

The campaigners point out several incidents showing dubious approach of drug makers. For instance, the drug was being prescribed to women even after warnings were issued by authorities in 1975. Even the Committee on Safety of Medicines, the government medicine watch dog, took several years to issue warning to doctors. Few experts also furnished favourable report for the company, showing these deformities are not associated with the drug.

Speaking in Cologne during Bayer’s shareholder meeting on April 26, 2013, Valerie Williams, the mother of a victim and founder of the Association spearheading the campaign, said: “I speak on behalf of the victims of the Association for Children Damaged by Hormone Pregnancy Testing in the UK. I also speak as a mother of a Primodos victim, a drug which has had a tremendous impact on thousands of lives across the globe, the wildlife, and the environment.”

She accused the company of going to great lengths to conceal the shattering impact the drug had on people.

UK litigation in respect of Primodos ended in 1982 for lack of proper evidence. The court, however, said the case could be reopened in future if any significant evidence surfaces.

In the past few years many developments like Bayer’s takeover of Schering and media investigations highlighting the irregularities and callous approach of the watchdog have revived the campaign for justice.

Though Bayer has continuously denied that Primodos was responsible for causing deformities in children, the campaigners want the company to own the responsibility of the damage done by its medicine.

The campaigners have repeatedly claimed they have evidence. For example, norethisterone, a component of Primodos, is nothing but synthetically created progesterone. Two tablets of Primodos of 10mg each were administered to women 12 hours apart to test for pregnancy. The drug was equivalent to a woman taking 2 – 3 packets of contraceptive pills at one time.  The campaigners question the logic of prescribing such high doses of contraceptive pills at one go.

They also demand to know why the company did it not take precautionary measures like its rival Roussel Pharmaceutical in France, which removed its hormone pregnancy test named Ammenore Forte from the market in 1969 when they came to know of a warning against such medicines.

MP Qureshi’s petition in Parliament has demanded a public inquiry. She has highlighted the fact that UK’s Department of Health had rejected requests for an inquiry in the past. It remains to be seen whether Primodos victims get justice and how much longer they will have to wait.

In the past decade, India has also been witness to the callous approach of multinational drug companies and policy makers when thousands of people were used as guinea pig in several drug trials, leading to deaths and disability. The victims in these cases too are struggling for justice even as the Supreme Court has directed policy makers to strengthen the law to protect the victims.