Look what our neighbour is up to! 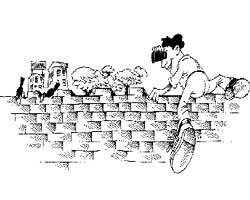 what makes a nation strong? Democracy? Dictatorship? What makes a people happy? Economic liberalisation? Centrally planned economy? Well, the people who know and count in today's world, seem to consider only these two alternatives. But a few fools think of the possibility of a third path. I consider myself to be one of the latter, especially since my recent visit to Myanmar.

Myanmar is run by the armed forces. The generals control the country. Freedom of expression is restricted. The media is controlled and so is the economy. I sensed apprehension among people, especially when talking to foreigners. But otherwise, people seemed to be happy, contented, economically better off than us Indians. I did not see the ugly face of poverty and deprivation.I did not come across slums, villages and towns wallowing in their own filth and excreta, sights common in India and that set me thinking! What makes people generally well-off and contented even under military rule?

Myanmar has a total area of about one-fifth of our country with a population that is eight or nine per cent of India's. For a long time there was internal strife in the country with different tribes-Kachins, Karens - seeking autonomy or even independence: similar to what is happening is some of India's eastern states. However, at the moment, there seems to be a truce with the government opening up more and more areas to foreigners.

In Rangoon (now Yangon), we rarely came across invalids, destitutes, beggars and lepers: people suffering from diseases left to die on the streets, as is sometimes seen in many cities and towns in our country. The number of doctors and hospitals is limited. I felt this to be a boon in disguise. Who needs doctors and hospitals if one is healthy and strong? That's what an average Myanmarese appeared to be.

According to the World Bank Myanmar is one of the poorest countries of the world. But is it really? To the Bank what is important is the sphere of monetary transactions. What about natural resources beyond the ken of money? As we left Yangon for the north, we saw vast forested regions, forests untouched by man: without human habitations, tracks or bridle paths; beautiful rivers with water so crystal clear as to reveal the bottom a few metres below. About 50 per cent of the country is forested.

Few rivers are dammed. The principal river, the Iravati, (Irawaddy or Ayeyawrwadi), is navigable for about 1000 km inland from the sea. This river, originating in the Himalaya region, together with its tributaries, spreads so much fertility in its floodplains that at one time Myanmar used to export 3.5 million tonnes of rice every year. Rice production declined after independence but has picked up in recent years. In winter when we were there, the monsoon crop had been harvested and preparations were being made for the second crop. We also saw vast tracts of fertile land devoted to growing vegetables which form an important part of the diet of the people. Food is cheap in Myanmar with prices of vegetables, fish and meat less than half of those prevailing in India. Rice is free except in star hotels in Yangon.

Myanmar is one of very few remaining countries rich in natural resources. The famous Myanmarese teak is a major item of export. The country also has oil reserves, precious stones, silver and marine products to export. It has a modest deficit on balance of payments and also a modest external debt. Petrochemicals, gems and timber trade are controlled by the government. India's imports from Myanmar have increased consistently in recent years.

Under General Ne Win, Myanmar had its own brand of socialism and centrally planned economy. But his successors have since 1989, opened up the contacts with the outside world and one can now see many foreign, including Asian, enterprises stepping in. Yet the scale of industrialisation is still very low. The problems it brings in overcrowded towns and cities, mountains of waste and garbage, polluted air and water, were hardly encountered.

Yangon was cleaned up by the army authorities and remains a quaint, sober city whose horizons are exquisitely lit up by the dazzle of the majestic Shwe Degon pagoda (Paya). High-rise buildings were few, modest houses built in traditional style were the charm of the city. It reminded one of Mumbai in the 1950s!

Palaces and ostentatious villas were not to be seen. Income disparities in Myanmar are not so glaring as in India. The total monthly expenditure of urban and rural dwellers is quite comparable (size of household 5.22 and 5.32 and expenditures K15,266 and K13,091 for urban and rural families, that is about Rs 2,540 and Rs 2,150).

Traffic in cities is quiet, orderly and disciplined, a pleasant surprise to one conditioned to utterly undisciplined traffic here. In villages, bicycles are the norm and not the motorised versions. When going out people ride bicycles, go to a steamer, load the bicycle on it, disembark at a distant place and ride again to their places of work or business. Myanmar has few good roads and modern amenities like electricity are also not widespread.

We travelled by vehicle for ten hours on one of their main roads, which was probably worse than the unmetalled tracks in our wildlife sanctuaries! However, the road went through beautiful forests, lovely, dark and deep which would have been victimised if it was a national highway.

Is electricity so essential to modern life? We have invested thousands of millions of rupees in producing it and recklessly squander it in a country so rich in sunlight! Myanmar has not killed its rivers for a few kilowatts, nor does it have an overdose of pollutive thermal plants. More than 60 per cent of power generation is based on gas and hydel energy.

The power is just enough to meet the basic needs of villages and towns. But Myanmarese are not without the pleasures of modern living. Shops are full of modern gadgets: TVs, cameras, electric appliances etc. They come from Singapore, Japan, China and Thailand. Unlike us Myanmar has not gone into producing these themselves by importing second class technology from the West. If they want cars they just import them from Japan or buy even secondhand ones from Thailand. This probably keeps the number of cars fairly low!

We on the other hand, tried to produce all these things ourselves and in the bargain destroyed our precious natural resources: forests, fertile land and rivers, our atmosphere and surroundings, our social and cultural life. Have we really caught up with the West?

We probably are as much behind them in technology as we were at the time of independence. Now in the last burst of a dying man's energy we are on the point of sacrificing what remains in our country under the compulsions of globalisation. We lost our resources and skills and never managed to invent our own technology befitting our conditions.

To me it seemed Myanmar has managed to get the best of the two worlds. It has not squandered its natural resources in an attempt to catch up with the West. Villages resemble those which Mahatma Gandhi visualised, hidden in groves of trees and surrounded by coconut, arecanut and banana plantations and thriving agriculture.

The average Myanmarese has clean habits and never defecates along roadsides. I saw simple, dry latrines built in corners of farms. This keeps the countryside neat and clean. It was always a pleasure to walk through their villages and bazaars. I returned to India with one feeling - damn us and our development priorities!

The writer is director of the Ecological Society, Pune