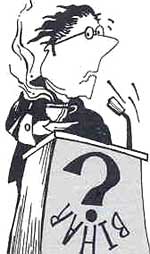 WHAT do depleting resource-bases have to do with riots, insurgency and revolution? The promise of a meaty answer, in the lavish surroundings of the stately Neemrana Fort Palace Hotel in Rajasthan, drew a group of academicians and activists to a two-day workshop last December. The project originated with the American Academy of Arts and Sciences andthe Peace and Conflict Studies Program, University of Toronto.

- The p roject's three case studies (including one on water scarcity in China and the other onpressure on forest lands in Indonesia) considered demand-induced, supply-induced and structural environmental scarcities. The Neemrana workshop discussed the third draft of the India paper by Shaukat Hassan, director, Global Affairs Research Partners, Ottawa.

The participants had been chosen as advisors to the project when.it started two years ago, but this was the first time that they were brought together to give their views. Hassan had an interesting task: to see whether the Malthusian prediction was coming true in Bihar and gauge the state machinery's ability to deal with the situation. But the workshop's raison d'Otre collapsed when the project's principal investigator, Thomas Homer-Dixon (University of Toronto), announced that the agenda had been altered to exclude civil violence, and instead focussed on the effects of environmental scarcity and the state's management capacity.

Homer-Dixon started out by saying that Bihar has good croplands and rich mineral resources, and there are no severe supply-induced shortages. This had some of the participants protesting again. If the conflicts in Bihar were socioeconomic and cultural, not environmental scarcity (for the state seemed to be having plenty), why was the state chosen as a representative case to study the effects of cropland shortages?

"The agrarian unrest in Bihar is not due to extreme conflicts'for scarce resources like water and land, but also due to political mobilisation and competition for state resources as a whole, including jobs,' said Ajit. Mazoomdar of the Delhi-based Centre for Policy Research. He emphasised the need to define civil violence within the context of the debate.

Hassan's draft, meanwhile, was found to be lacking not only in establishing demand or structurally induced scarcities in Bihar, but also in drawing the necessary links between the scarcities and their effect on state capacity. It was found to be statistically poor, making difficult to arrive at sufficiently convincing conclusions.

For example, Hassan tried to relate decreasing state capacity to falling land revenues as a percentage of the state's total tax revenue. But the participants pointed out that in Bihar it is not the yield but the amount of land cultivated that decides land revenue.

Kailash C Malhotra from the Indian Statistical Institute pointed out that scarcity cannot be measured by taking only one parameter, like cropland or water into account. An overall picture of important resources has to be considered. Smitu Kothari from Lokayan pointed out that the Bihar government had extracted revenue from both, mineral and forest wealth, but spent very little resources on the community. So-the presumption that increased revenue meant increased state capacity was demolished altogether.

Leela Gulati from the Centre for Development Studies, Thiruvananthapuram, pointed out that with the project already two-thirds under way, it was a little late in the day to look for advice. "What is our role... are we simply to react to what has already been done?" she asked.

Kothari finally hammered in the last nail, quoting a 1993 - report, which, he said, had actually shown a decline in violence in the state, scarcity or no scarcity!

Thereafter, discussions on the paper were abandoned and the participants went back to square one. It was apparent that much was wrong even with the conceptualisation of the project. Homer-Dixon tried to explain away the lacunae by saying that a paucity of funds had not permitted a meeting with the Indian advisors prior to the start of the project. But the us $400,000 budget and the plush locale of the workshop made that a little hard to swallow.