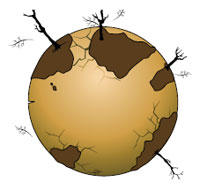 METEOROLOGISTS ARE still not sure of the timing and intensity of El Niño. But it is clear that this monsoon will not be normal and there is a serious possibility that some parts of the country will be hit by drought and crop failure. The question is why we remain so unprepared to deal with crippling water shortages year after year. Why have all our efforts to drought-proof India failed?
What should we do now?

We have been gravely remiss about water management. I say this because we had no excuse not to act. The past 10 years have been good rainfall years. This is the bounty that governments had no right to squander away. It was in these 10 years that everything could have been done to harvest rain, to recharge groundwater, to build rural ponds and tanks and to improve the efficiency of water use. There is no excuse because the problems are known and the solutions have been tested, just not applied and worked upon.

Why do I say this? It was in the late 1990s that India saw its last crippling drought—rain failures for long years and over vast stretches. It was also in this period that innovations were made by different state governments to drought proof their regions. Andhra Pradesh launched the Neeru Meeru water conservation programme, Madhya Pradesh had the Ek Panch Ek Talab (one panchayat, one tank) programme and Gujarat the Sardar Patel Participatory Water Conservation programme to build thousands of check dams to harness rainwater. Tamil Nadu took the rainwater harvesting campaign to practically every house in Chennai.

In all these states, the key learning was that governments could no longer rely solely on surface water irrigation systems for drought management. It was clear by then that not only was groundwater the major source of irrigation, but also the bulk of cropped area remained rainfed. Rain provided relief and rescue for most of India’s agricultural area. Either because it was the only source of irrigation or because it was the source of groundwater recharge. So, instead of fighting this fact, governments learnt to build a new water future based on harvesting rain. Catch water was the slogan of that period.

In the subsequent decade of relative rainfall sufficiency, the opportunity was to build the water security network— not drought relief but relief from drought. Till mid-2000, water conservation was an agenda for the government. It was in this period that the National Rainfed Area Authority was set up; the watershed management programme was revamped; a new programme for repair, renovation and restoration of water bodies was launched and groundwater recharge was prioritised. The Mahatma Gandhi National Rural Employment Guarantee Act (MGNREGA) had the stated aim to conserve soil and water by building of tanks, ponds and check dams across the country.

Even as mission water conservation was launched, there was no drive to implement the programmes. Water conservation structures built under these programmes were either not completed or not designed to work. Today half-made, poorly designed and even more poorly maintained water assets litter the countryside. This expenditure should have drought-proofed the country. Then, the rainfed area and watershed projects got embroiled in bureaucratic tangles and turf wars. These programmes could not even fix the basic responsibility of who would regenerate and protect the watershed. In most cases this land is under the control of the forest department. It is time we got this right. MGNREGA needs to be drastically reworked so that it focuses on development first. The stress should be on finishing the village water security and development plan. Panchayat functionaries must be responsible for the quality of work and payment must be made accordingly. Other programmes that augment, conserve and efficiently use and reuse water should be energised.

We will not get many more chances to get the art of water management right. It is time to do or die. It is time we understood this.