Making sense of `Make in India'

Manufacturing needs to get a boost. But what to manufacture and how are two critical questions

Manufacturing needs to get a boost. But what to manufacture and how are two critical questions 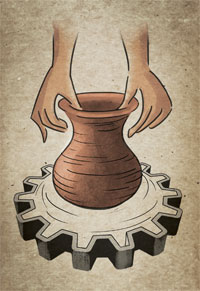 Prime minister Narendra Modi’s “Make in India” slogan is slowly beginning to capture the imagination of both his supporters and detractors. Starting from his Independence Day speech, where he first made the comment, to his recent US trip, where he turned it into an instrument to get foreign investment, the country is getting to know what this campaign is all about.

The “Make in India” campaign aims to make India the manufacturing hub of the world, challenging China’s dominant position in the world of manufacturing. Modi has linked this to creation of employment to encash the demographic dividend. In simple terms, companies will come to India to manufacture products instead of just marketing them here. This will create jobs for people, fuelling economic growth. This is where the campaign seems to be out of sync with the employment realities of India.

It is not for the first time the government is focusing on the manufacturing sector to boost economic growth and generate employment opportunities. India’s dominant employer—the agriculture sector—is no longer able to absorb the increase in labour force. The recent increase in non-farm employment is mostly due to the rise of the service sector. But as both the sectors are now staring at stagnation, manufacturing has to be the next big employer. Experiences of developed countries show that this is the trajectory they have followed.

Way back in 2011, former prime minister Manmohan Singh declared the National Manufacturing Policy. This was the first attempt to focus on this crucial sector. But in the past three years, we did not see much impact. India needs to create 220 million jobs by 2015. The manufacturing policy aims to create 100 million jobs by 2021 by increasing the share of the manufacturing sector in GDP to 25 per cent from the current 16 per cent. Modi’s “Make in India” just carries forward this policy. But the problem arises when one gets down to analyse what to manufacture, where and how. A glance at the official website of the campaign lists 25 sectors that will be in focus for manufacturing. Of these, 22 are related to heavy industries and involve specialised technology that India currently depends on others to provide. This means, the companies will just set up shops, use cheap and vulnerable labour force and lots of government incentives to manufacture products.

This is precisely the main hurdle for the campaign to achieve its objectives. Modern manufacturing is capital-intensive and is already employing fewer and fewer people. Moreover, the targeted Indian labour force may not have the right skills. And, as the companies have been complaining in the past three years, manufacturing involves large-scale land and water resources which they are not able to get. This brings the campaign back to the clichéd environment versus development debate.

The reality is that the Indian labour force is more skilled in traditional occupations, such as handicrafts, textile and agro-based activities. During the formulation of the 12th Five Year Plan this issue came into focus and experts agreed that manufacturing as we understand in modern times would not fetch Indians jobs. Rather, refocusing on India’s traditional occupations could potentially create 10 million jobs a year. At the time of Independence, India was a global hub of manufacturing, with most of the sectors focusing not on industrial products but on traditional occupations using the vast resources. The global demand for Indian handicrafts and textile is still high. It still employs close to 25 million people. And is rightfully a made-in-India skill. This is the message for the new campaign: a “make in India” policy must have made-in-India skills as its inevitable ingredients.