Mark Lynas and the demeaning of science

He’s fuzzy on facts and low on science, but the campaigner gets big media support

He’s fuzzy on facts and low on science, but the campaigner gets big media support 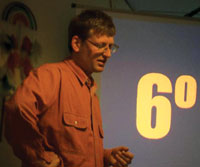 Within days of his address to the Oxford farming conference on January 3 where he claimed he had been wrong in opposing GM crops, environmental activist Mark Lynas’s speech had gone viral, attracting an avalanche of comments, the brickbats perhaps outweighing the fulsome praise. Down To Earth, too, was alerted to the speech but I, for one, was foxed by the headline-grabbing mea culpa. One knew vaguely that Lynas was a climate campaigner who had changed his views to accommodate the concept of planetary boundaries—if humanity operated within the boundary framework on 10 parameters we could continue to exist as we’ve done in the past 10,000 years—and had written The God Species to explain his new thesis. According to the thesis, climate change is “more than anything else, a financing issue”. So why were a lot of people getting hysterical about the Lynas speech on having seen the light on GM crops?

Two sets of people are fulminating over the claims made by the activist. One lot is the anti-GM activists who, justifiably, are questioning his claim that he “helped to start the anti-GM movement back in the mid 1990s”. If he did so then not many knew this. One of his claims, made in an interview to The Indian Express, which has outraged activists here is that he coordinated the anti-GM campaign with Indian NGOs, “in the process taking the fear of GM crops to India”. But what is odd is that the anti-GM Saul converted to the GM-is-the-solution Paul at least two to three years ago, and hence the excitement of the media worldwide is a little curious to say the least.

Even more surprising is the reaction of Indian newspapers; most of them have grabbed at Lynas’s Oxford speech with a delight—or is it desperation?—that is hard to fathom. Ironically, it is the very same dailies that took pains to highlight Prime Minister’s recent remark at the Indian Science Congress: “Complex issues, be they GM food or nuclear energy or exploration of outer space, cannot be settled by faith, emotion and fear but by structured debate, analysis and enlightenment. A scientific approach and understanding of these issues are therefore as vital as our core scientific capabilities.”

What does Lynas have to say that is scientifically valid? This is where the other set of people who have been upset by his contrition come in. These are scientists, and highly reputed ones, who have been withering in their criticism of his understanding of science. This is important because Lynas says the reason he is no longer hostile to GM crops is because he “discovered science”. This column does not have the space to detail the frailties of Lynas on the science of GM. Scientists like Doug Gurian-Sherman, a doctorate in plant pathology and senior scientist with the Union of Concerned Scientists, and John Vandermeer, professor at the department of ecology and evolutionary biology in University of Michigan, have ripped apart Lynas’s sweeping and naive claims and what appear to be deliberately inaccurate portrayal of the GM technology.

Here are some of the more egregious examples: according to Lynas, the world needs GM because other methods are inadequate to meet the planet’s food requirements. Here’s what Gurian-Sherman has to say: GM may contribute, but conventional breeding continues to outpace GM and is likely to do so in the future. Besides, agroecology is much better at addressing many of these issues because of pressure on finite resources and the resilience required. The other myth Lynas fosters is that GM has been instrumental in reducing pesticide use. A recent study by Charles Benbrook shows the biggest promoter of GM crops, the US, is using much higher amounts of pesticide on account of GM herbicide-resistant weeds, mismanagement, and the monoculture system of GM technology. As anyone keeping tabs on GM knows, resistance to Bt by rootworm in the US is increasing and will lead to higher insecticide use. In other parts of the world, too, insect-resistance is mounting: by the stem borer in South Africa and bollworm in China. All of these are issues that Lynas does not deign to address.

Ultimately, Lynas and what he says should not matter to us: not to the scientists, to the activists or to the media. But what’s worrying is the reluctance of the Indian scientific establishment to acknowledge the downside of GM technology. Worse still is the determined refusal of the mainstream media, specially the business dailies, to make an effort to understand the issues surrounding the issue. The scientific illiteracy of journalists is well known. Should they then be relying on the likes of Lynas to push their agendas?