The indian Patent Office’s rejection of one of Gilead Sciences’ patents on sofosbuvir, which is used to treat the killer hepatitis C (hep C) infection, has put the spotlight back on the whopping cost of this drug. Treatment over a 12-week period costs $84,000, or an eye-popping $1,000 per pill per day, a price that not many even in the prosperous parts of the world can afford.

Sofosbuvir, sold under the brand name Sovaldi, is a blockbuster drug that has revolutionised the treatment of hep C since it was approved in 2013. The new therapy is vastly more effective than the earlier weekly injection regimen spread over a year. Besides, unlike the earlier drugs, sofosbuvir is said to have less side effects.

But this good news is offset by the prohibitive price of the drug, which is making even the UK’s National Health Service baulk at prescribing it. One estimate puts the tab at £1billon ($1.5 billion) for every 20,000 people treated. Gilead’s “price gouging”, as some health activists have termed it, revives the debate on how much it costs to bring a drug to the market and what pharma companies are justified in charging to recover their investment in research and development. For long, drug companies have claimed that it costs at least $1 billion to launch a successful drug but these claims have been exposed by many industry analysts. The most famous expose was by Marcia Angell whose 2004 book, The Truth About the Drug Companies: How They Deceive Us and What to Do About It, showed that investment on R&D was less than half of the amount spent on sales, marketing and lobbying. 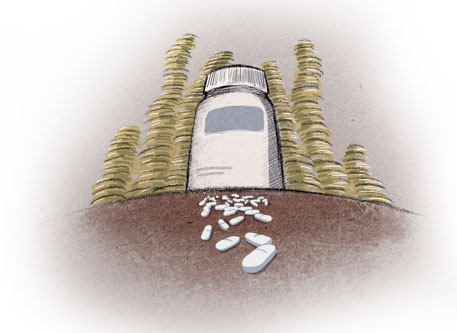 While pharma companies may swear that their primary motivation is drug discovery and people’s health, they would find it impossible to deny they are profit-driven entities driven by the market. In 2011, Gilead bought Pharmasset, a Princeton-based pharma company engaged in the development of oral therapies for treating hep C infection. It paid an astronomical $11 billion for a company which was valued at just $5 billion. Yet, Gilead made a strategic acquisition, borrowing money for an all cash deal. One market analyst pointed out acidly at the time that a company “can do a lot of research for $11 billion”—if it wanted to do so, that is. Industry insiders agree. Jeff Williams, who heads Clinipace, a contract-research organisation, was quoted in a recent article in The Economist as saying that the small-to-medium companies that his firm works for manage to develop their drugs for less than $500 million.

But Gilead was clear it wanted to straddle the expanding anti-viral space, and buying Pharmasset is a gamble that has paid off handsomely. Sofosbuvir is a blockbuster that has sent its revenues and profits skyrocketing. In 2014, revenues more than doubled to $24.2 billion, and, according to analysts’ estimates quoted by Bloomberg, earnings are projected to touch $12.8 billion. This is four times the 2013 figure.

Now comes a most interesting report from Liverpool University, UK. A research project led by Andrew Hill of the university’s Department of Pharmacology and Therapeutics, says that affordable generic versions of sofosbuvir can be produced at less than a tenth of the current price charged by Gilead if there are “no patent restrictions on production and procurement of large orders for drug manufacture by generic companies”. Their projection: $68-136 to make sofosbuvir in about 15 years.

Gilead, meanwhile, is appealing India’s rejection of the patent on its base compound on the ground that it lacked novelty. There are other uncertainties because more claims on Sofosbuvir are pending. For India’s 18 million hep C patients it’s going to be a long wait.