McNamara shoots from the hip

Today's neo-Malthusians have acquired a fashionable new fig leaf: environmentalism. And Robert McNamara's recent talk in Delhi was an eloquent expression of this trend 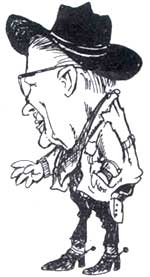 Last November, at an international meeting on women and the environment, some of us were arguing with UNFPA officials over the use of risky, long-acting contraceptives like Norplant in population control strategies. A German environmentalist interrupted: "But your women are already dying for want of health care and drinking water." The implication of her statement was clear: any contraception, even unsafe contraception, was better than letting the wretched of the earth reproduce endlessly.

Today's neo-Malthusians have acquired a fashionable new fig leaf: environmentalism. Earlier they spoke in terms of numbers. Today, they give you get a whole library of environmental terms: biotic pressures on forests, carrying capacity of the earth, net primary production, photosynthesis, and so on.

Robert McNamara, a former president of the World Bank, unleashed a fusillade of such terms when he delivered the First Rajiv Gandhi Memorial Lecture in Delhi on May 23. The talk was rather grandly entitled: "A global population policy to advance human development in the 21st century with particular reference to India".

It's a sign of the times that we have a man who was US secretary of defence from 1961 to 1968 -- the years that saw the American military presence build up in Vietnam -- deliver what was billed as a prestigious national event.

It's again a sign of the times that the speaker, instead of confining himself to the philosophical problems of human existence, chose instead to launch a broadside on India's handling of the population problem. Although McNamara mentions that he had been invited by the organisers to speak on this topic, clearly, it is one after his own heart. "In September 1968, in my first speech as president of the World Bank, I stated: The rapid growth of population is one of the greatest barriers to economic growth and social well-being of (the people) of our member states. That was my view in 1968. It's my view today."

McNamara, it appears, has learnt nothing and forgotten nothing from his 13 years as president of the World Bank. But this time he has a useful equation and a new set of figures piping hot from the data ovens of the World Bank: ED = P x C x D (ED stands for environmental damage, P for population, C for consumption and D for environmental damage per unit of consumption). According to McNamara, by the year 2085, the world population would stabilise at around 12.4 billion of whom 1.85 billion will be Indians. (Nafis Sadik, UNFPA's executive director, does one better and puts the world figure at 14 billion, of which 2.1 billion will be in India.) This equation may have worked if McNamara had bothered to look at the North's consumption in any detail. Apart from token references, he displayed no inclination to do so. He quoted the Centre for Science and Environment (CSE) document, 'Global Warming in an Unequal World', which argues that the US, with less then five per cent of the world's population, emitted 26 per cent of the carbon dioxide. The corresponding figures for India were 16 per cent and six per cent. But he was quick to point to projections made by the Tata Energy Research Institute (TERI) which indicated that India's contribution to the future global increment could range between 17 and 34 per cent.

Of course, there were many points McNamara raised which were relevant. Of course, we should not define family planning narrowly as "population control". Of course, we have failed to give adequate attention to other factors which affect fertility like the age at which women marry, their status and education levels and so on. But do we need McNamara to tell us what our demographers have been arguing for years?

In fact, what McNamara did not say was more interesting. He was duly alarmed at the rapid destruction of tropical forests "which are the primary source of genetic diversity" and saddened by famines in Africa. But he didn't ask the right questions about these phenomena. For instance, why are virgin forests being cut down in the Philippines? Does it have something to do with the fact that an estimated 43.09 per cent of the Philippines budget went towards debt servicing in 1991? Why, for instance, is there famine in Africa amidst "mountains of cotton, cocoa and coffee"? Does it have something to do with farmers switching over to cash crops in pursuit of the almighty dollar?

McNamara didn't spare a thought for the inequities of global trade. Neither did he care to investigate how the policies dictated by the same bank of which he was president, had forced the devaluation of local currencies and the marketisation of natural resources on several countries. He turned a blind eye to the environmental damage done by the US military machine. Rosalie Bertell, of the Toronto-based International Institute of Concern for Public Health, points out that it was the chemicals, pesticides and defoliants created for the Vietnam war, now deployed in the civilian sector, that are destroying the earth.

Not surprisingly, McNamara's solution to the problem of overpopulation was to get the World Bank and other multilateral agencies to finance expanded family planning programmes in developing countries. As he put it, "The World Bank has already started on such a path, doubling its financing of population projects in the current fiscal year -- from US $169 million in 1990 to an estimated US $340 million in 1991.... Money should not stand in the way of reducing fertility rates as rapidly as desired by the developing countries."