There are parallels in case of the Vietnamese victims of the deadly herbicide and the Bhopal gas tragedy. Both demand restitution 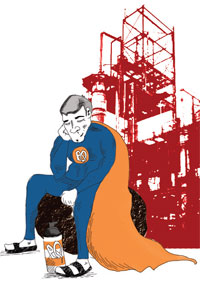 Vietnam was the war of my generation. Although the devastating conflict was played out thousands of miles away and news was not so easy to come by in the years when American B52 bombers were using napalm in North Vietnam, the war defined many things for us: our political outlook, our view of global affairs and our deep sense of humanity.

In the formative teen years, the epic struggle of a small nation against the sophisticated weaponry and technology of the US can make a lasting impact. There was My Lai, a blot on the US army which killed 400–500 civilians, mostly women, children and the elderly in three villages. But there was also Jane Fonda and protesting American college students some of whom were shot dead. Here, too, there were protests and above all, Pratidwandi which became an iconic film for just one scene.

In Satyajit Ray’s underrated classic of 1970, the hero Siddhartha, desperate for a job, is being interviewed by a panel of dour corporate types. He is asked: “What do you think has been the most significant human achievement in the last 10 years?” He replies: “Vietnam.” When a shocked interviewer asks, what about the moon landing, Siddhartha replies it was just a matter of time; man would land on the moon some day. But no one could have predicted that a small and poorly armed nation could keep the world’s super power at bay by sheer grit. It expressed a generation’s solidarity with the Vietnamese.

It was not till much later that a horror worse than My Lai would be revealed. That was Agent Orange, one of many deadly herbicides/defoliants sprayed over Vietnam. Over a decade, the US sprayed around 17 million gallons of a rainbow hue of defoliants over the jungles of South Vietnam, chief among these being Agent Orange which was laced with dioxin. Dioxin is extremely toxic to humans, and the Vietnamese government estimates that 4.8 million Vietnamese people were exposed to Agent Orange, resulting in 400,000 deaths and disabilities. And half a million children born with debilitating birth defects.

Over the decades American war veterans who also suffered serious health problems have been fighting for compensation from the companies that made Agent Orange, primarily Dow Chemical Company and Monsanto. In 1984, the year of the Bhopal gas tragedy, the veterans managed to get $180 million in an out-of-court settlement. To their shock, they found that the most affected veterans would get a one-time lump sum payment of just $1,200. It was a foretaste of what would happen to the Bhopal gas victims a decade later.

As to the Vietnamese victims, they got no relief at all. The lawsuit filed by the Vietnam Association for Victims of Agent Orange/Dioxin was thrown out by all the tiers of the judiciary right up to the Supreme Court. The courts held that there was no legal basis for the plaintiffs’ claims because a) Agent Orange was not considered a poison under international law at the time of its use by the US; b) the US was not prohibited from using it as a herbicide; and c) the companies which produced the substance were not liable for the method of its use by the government. In short, although the herbicides contained dioxin, they were not considered a chemical weapon and thus not a violation of international law. End of compensation story.

In India, with the Bhopal gas victims facing a similar sellout by their own courts and the government, the trials of the Vietnamese barely registered. But two weeks ago, memories of Agent Orange and its horrendous toll revived when Vietnam joined hands with its former enemy, to clean up the noxious remains of Agent Orange. The remediation project makes for cheer even if it comes after five years of wrangling and 16 years after the countries kissed and made up. The sites where the defoliants were stored during the war years are to be cleared of the contamination in a $32 million clean-up project. It is certainly a significant event because “the dioxin contamination and Agent Orange was one of the single most neuralgic issues in the US-Vietnam relationship”.

Not that it has stopped the very same companies from doing business in the new Vietnam. Dow has a liaison office “dedicated to the promotion of trade and technical cooperation” in Ho Chi Minh City (formerly Saigon), while Monsanto has a subsidiary Dekalb Vietnam which has been doing a thriving business in seeds and biotechnology with Vietnamese farmers. The Vietnamese are clearly a practical people who can put the past behind them. And they must certainly be among the most forgiving, too.

Can we ever hope to clean up the toxic and searing legacy of Bhopal even if there is no forgiveness?