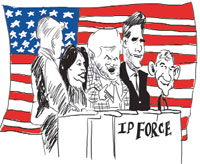 There is something that Prime Minister Manmohan Singh has in common with US diplomats—or at least the intellectual property (IP) attachés posted at various diplomatic missions: a dislike of NGOs. Both, the leader of the world’s most populous democracy and the diplomats of the most powerful democracy, make no bones about the fact that they find NGOs a stumbling block in implementing their various agendas.

“There are NGOs, often funded from the US and the Scandinavian countries, which are not fully appreciative of the development challenges that our country faces,” Singh said in an interview published in Science in February last year. He was bewailing the campaign by food and agriculture activists against GM crops and by other groups against nuclear power. In Geneva recently, US diplomats were railing against the same class but for trying to weaken the IP or patent regime. At the annual conference of American IP attachés organised by the powerful US Chamber of Commerce, these officials were in full cry against NGOs, specially those operating at WTO and other UN agencies, for misleading their governments about the costs imposed by the IP regime favoured by the US.

IP attachés? That’s the new breed of diplomats that Washington has been posting at its key embassies to ramp up IP awareness and ensure that developed countries fall in line on its maximalist IP agenda. India has been hosting one such since 2006, an official of the US Patent & Trademark Office (USPTO) who functions as First Secretary (IP) at the US embassy in Delhi.

Aided by local lawyers, the IP attaché has tied up with industry bodies to make IP an unavoidable aspect of business dialogues. China, which came under intense pressure to change its IP regulations as part of the conditions for entering WTO, has three such attachés—in Beijing, Shanghai and Guangzhou. Others are posted in Rio de Janeiro, Cairo, Mexico City, Moscow and Bangkok to cover strategic countries and regions.

Their agenda, openly stated, is to promote US IP rights (IPR) policy globally; to help secure strong IPR provisions in international agreements and host country laws; to encourage strong IPR protection and enforcement by US trading partners for the benefit of American rights holders. Some of these officials are being undermined by NGOs who have been campaigning against the harmful impact of IPRs on public health, agriculture, environment and just about every sphere of economic activity of developing countries. They have also been exposing the self-serving claims of the US and other developed nations that protecting IPR creates wealth and transforms developing countries into knowledge societies.

NGOs have been playing a critical role in highlighting IPR demands, particularly in trade pacts, that impose conditions that go beyond what is required by WTO. It was not surprising that the most vocal of these was Karin Ferriter, IP attaché to WTO. “People in Geneva are misinformed by the NGO community to devalue IP,” Ferriter was quoted by the online IPWatch in a dispatch from Geneva, and “are working just as much as possible to weaken the IP system”.

Her colleague, Todd Reves who is posted to the UN and in particular to the World Intellectual Property Organization, lamented that “the wrong people (were) talking to the right people”. Since regular diplomats are not IP experts, they are “more susceptible” to the messages of the NGOs. “They may be hearing the wrong message.”

Not so. If anything NGOs are not being heard as widely as they should be. In a wide swathe of African countries, for instance, governments are not just susceptible to the wily arguments of US diplomats but they are not clued in to the dangers posed by the US IPR agenda. By Ferriter’s own admission, such NGOs are not found in the capitals of such countries as the Cameroon, where, she claimed government officials were “true believers” and wanted better quality products through IP rights.

Most revealing of their single-minded approach to IPR was the complaint of one attaché that developing countries were continuing using flexibilities in IP law, and were tailoring the IP system to fit their levels of development. Which is as it should be, but who is to argue with an indoctrinated US official? If one listened closely to the tone and tenor of the speeches made by the attachés, one got a good sense of where the US agenda was surging and where it was in (temporary) retreat. Here’s a summary: Brazil, once the bulwark against unfair IPRs, is falling in line because the president supports patents; southeast Asia continues to be tough territory since there was a popular perception that IPRs only raised costs; Malaysia, however, is an example of a changing policy.