How many people die of silicosis in Indian mines?

One of the worst health hazards that miners engaged in stone quarrying, crushing, quartz mining, glass and ceramic manufacturing face is dust pollution 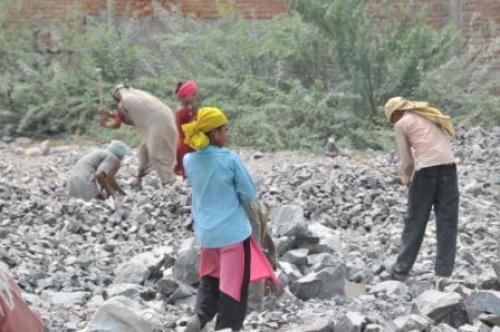 Years ago, Delhi-based non-profit Centre for Science and Environment came out with a publication titled “Rich Land, Poor People”.

The article focused on the plight of workers engaged in the mining sector. From the colonial period to nearly 70 years after India’s independence, miners contributing to the country’s GDP growth have been the most ill-treated as citizens. How many of us know how under what conditions they live and work?

One of the worst health hazards that miners engaged in stone quarrying, crushing, quartz mining, glass and ceramic manufacturing face is dust pollution. The deadly disease silicosis continues to silently kill hundreds of workers. Thousands of mine workers die before reaching the age of 40.

A recent media report states that 10 million miners working in the abovementioned sectors are exposed to silica dust. (The Times of India, June 20, 2016). It is also reported that 50 per cent of miners are found to be suffering from silicosis in any given age group.

While preparing the “Status of Environment Report” for West Bengal in 1998, the blogger had the first-hand experience of witnessing the plight of workers engaged in stone quarries and crusher units in West Bengal’s Birbhum district.

More than 10,000 tribal men and women as well as underage workers, are engaged in the job on a daily wage basis.

There is no provision for health insurance, provident fund, leave with pay for these people as they continue work, inhaling the dust and working in the midst of blasting sounds.

Even a Supreme Court ruling did not help in providing them protection. How many of them died of silicosis? No one probes. A repeat visit by one of my researchers in the area in 2014 showed no change in their working conditions. Besides dust pollution, women face sexual abuse.

In reality the picture may be vastly different. According to the Mine Labour Protection Campaign (MLPC), a non-profit community-based organisation, the actual number is manifold.

Even the state human rights commission officials stated that the “actual numbers could well be in lakhs”.

It is true that Rajasthan has the highest number of mining leases in India. But in most other Indian states, mining operation continues to remain unorganised. Such mines are never mechanised. There is no safety gear given to the workers such as face masks, goggles, head caps and gloves. Mine owners hardly care for wet drilling which can help reduce the dust.

There is no system of health check up like chest X-ray. One wonders how many mine workers are exposed daily to dust pollution in 35,000 leases and quarries across Rajasthan. Add to this the equal number of illegal operations and the picture will be horrifying.

MLPC official Rana Sengupta first stumbled upon a large number of widows whose husbands have allegedly died of tuberculosis, a preventable and curable disease.

It probed into the real cause behind the deaths which revealed the truth: it is not tuberculosis but silicosis that killed these men.

Out of the official figure of 5,037 patients suffering from the disease in Rajasthan, 3,888 have reportedly got relief of Rs 1 lakh.

The control and management of silica dust is not difficult. Besides wet drilling, use of safety equipment and regular health check-ups can change the scenario for the better. Australia, North America and Europe have significantly reduced silicosis incidents.

When will our Union and state governments rise up to the occasion? The setting up of the state pneumoconiosis board to record cases will not end the misery of millions of poor workers dying of silicosis.