How sand mining along the Narmada is choking web of life 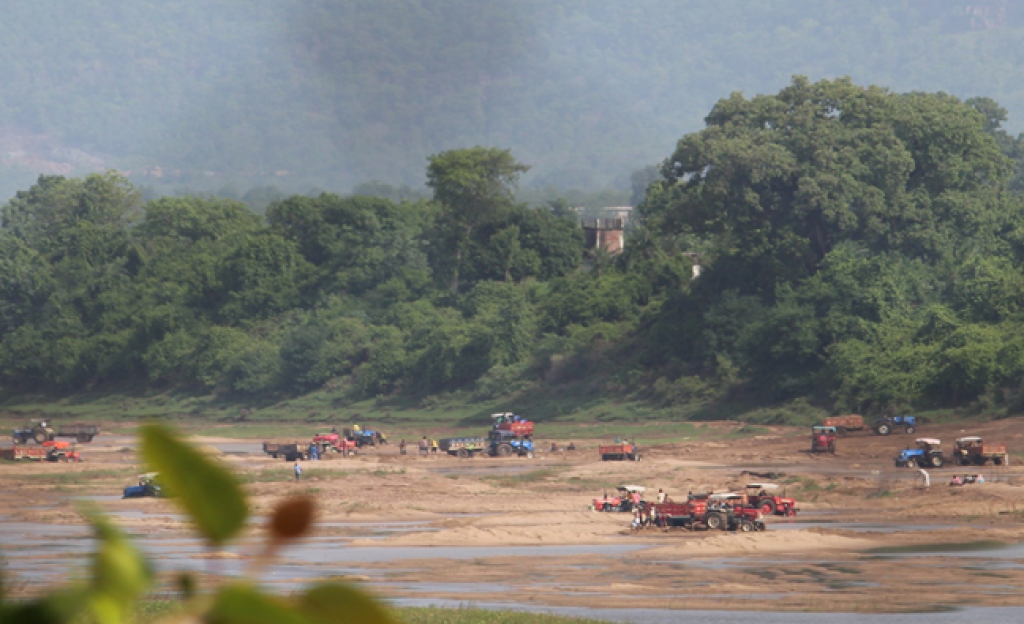 Public resistance to big dams in the Narmada had thrown up questions on the relationship between development and environment. It has asked basic questions on socio-cultural and economic relations with the river.

Even as these issues remain unsettled, the last six-seven years have seen large-scale sand mining along the rivers in Madhya Pradesh (MP). These present more unsettling questions on sustainable development.

A huge number of machines extract as much sand as possible from the Narmada before the monsoon ban on mining. The scale has increased tremendously, with illegal mining dwarfing the legal ones.

These are the outcomes of a new policy brought forth in 2015 by the Bharatiya Janata Party government in the state, which identified more sand mining areas; sand became the first mineral to be e-auctioned.

At least 586 approved mines spread over 4,537 hectares in 33 districts were operational in 2015. The administration is silence on illegal mining; staff members in the mining department are unequipped to deal with the large-scale of operations.

The sand mafia has been aggressive on police constables, journalists and administrative officers. Several cases have been filed by non-profit Narmada Bachao Andolan and others, and the National Green Tribunal has banned mechanised sand mining in the Narmada.

Yet, the duration of the monsoon ban in 2020 saw large-scale mining operations after the novel coronavirus disease (COVID-19) lockdown was lifted.

Large-scale sand mining disrupts the web of life and pays no heed to their sustainability. Even as most birds living in the water front — such as the cormorants, egrets and storks — breed during the monsoons, there are several others who nest in the sands before that. Moreover, several livelihoods are nurtured by the sand before the monsoon.

Lapwings coexist with people who grow melons and cucumbers on the sands of the Narmada. They call and fly around and do not perch on trees like the egret. They stand on the ground as their feet cannot make a grip on tree trunks.

They lay their eggs, like the curlew, on the sand without elaborate nest building. Egrets, storks, cormorants, jacanas, herons and winter migrants like ducks and the Siberian crane live along the Narmada. 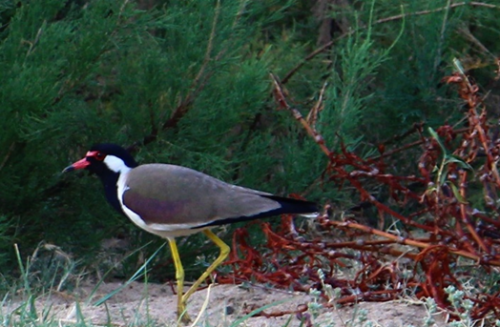 The red-wattled lapwing, found commonly in the region, breeds from March to August. Photo: Yemuna Sunny

In summer mornings, solitary kingfishers feed from the river that need a daily diet amounting to at least 60 per cent of their body weight. So they seek to have control over a suitable stretch of the river.

Both female and male birds excavate burrows for nesting in stone-free sandy soil. The river is not as fast as the one in the Hoshangabad plains, and is ideal for kingfishers. But deforestation in the upper catchments as well as water pollution has diminished the aquatic life in Narmada.

A fisherman named Narmada observed: “We now wait longer to obtain a catch as compared to the past. We often travel up stream away from the town, hoping for a better catch.”

The bee-eaters are active in summer, swiftly catching flying bees and thrashing out their stings or venom on tree trunks. Their nests are tunnels made on vertical sides of sandy banks. They loosen the sand with their sharp bills and kick out the soil with their feet, completing the nest building in around 20 days.

The richness of flora and fauna along river banks is sustained through deep interconnections, like the seeds of several trees getting dispersed through their droppings and becoming new saplings.

Prior to the monsoons, people farmed melons and cucumbers on the sands through lease or patta of the land from the revenue department. Often, the dams that open gates in summers damage the crops. Donkeys led by young boys carry sand on their backs. Fisher folk catch for themselves and sell some in the market.

The Narmada and other rivers in MP have been sustaining thousands of sand farmers, fetching enough to see them through the four monsoon months, when there is no income generation.

Villages such as Devachar in Narasimgpur district were well-known for sweet cucumbers cultivated by the Majhi, Kushwaha, Mehra and Kahar communities. Rampant sand mining has deprived their livelihoods as well as the availability of good quality cucumbers.

Sanju, who sells water melons in Hoshangabad town, said:  “Around five years ago we had to stop cultivation because of sand mining in the summers. We now buy melons from other places and sell them.”

New varieties of cucumbers and water melons are being grown on non-sandy soil. A conspicuous decline in livelihoods of landless people can be noted since the sand mining policy of 2015.

Mining has altered the landscape, the river flow, water availability and sand deposit patterns. Streams now dry up from January onwards, including Shed and Shakkar in Narsinghpur district, which had previously held water all the year round.

Tributary rivers of Narmada such as the Dhudi have dried up and changes in river ecology have brought sand to some farms, disabling farming. 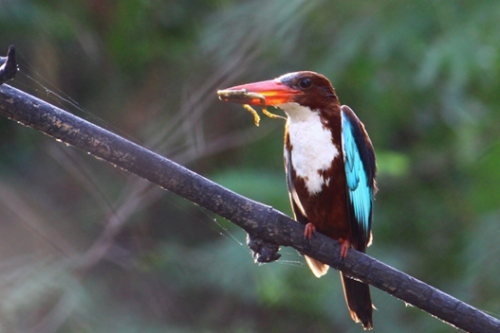 While March-April is the breeding time for kingfishers, the white throated kingfishers breed with the onset of the monsoons. Photo: Yemuna Sunny

As large-scale mining destroy livelihoods enriched through river deposits, the wages received by labourers for some time in mining sites are not sustainable options. Decisions are taken arbitrarily by the state without any consultations with the people whose livelihoods are at stake.

Decisions on issues of development are governed solely by capital, with no control over scale and illegal mining. People with no capital and voice in the system lose out on their relationships with nature.

A large number of people in Madhya Pradesh cannot meet basic requirements like food, clothing, education and health. According to the Global Multidimensional Poverty Index (MPI), 2018, MP is the fourth-poorest state in the country.

Reports show a decline in the situations of ordinary people’s lives in the state as compared to in 2010. Similarly, the World Bank’s ‘India State Briefs’, 2016, pointed while the poverty rates in the state were similar to the national average in 1994, it now sees higher levels of poverty with 24 million poor people.

Malnutrition is widespread, with the National Family Health Survey IV, 2016 recording more than 45 lakh underweight and stunted children in the state.

Even as no change has been brought forth on the traditionally skewed land holdings since the 1990s, more land is being occupied by corporates or given on lease to them by the government. So, the skewed land-holding patterns become even more pronounced. Landless people’s access to common lands is being closed as powerful people through strong state- supported relations with nature occupy those spaces. 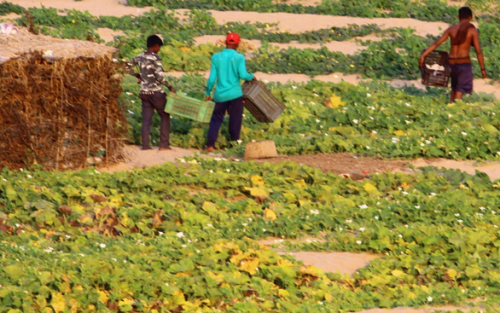 The intricate relationships between the fishers, the small-scale sand miners, the sand farmers, the birds and the trees pertain not only to the possibilities of developing sustainable ways of human life in an economic sense, but also sustaining all life forms and their relationships.

But capital operates in ways that side-line sustainability, making the ordinary people poorer. As a result, many may be forced to migrate. Landless people lose not only common lands, but also a sense of belonging to any place on the earth.