Missing the grass for the trees

Overprotection of grasslands in India is leading to its decline

I looked out from the observation hut and took in the soothing vision of lush green grasslands in the autumnal light of an October evening. A male great Indian bustard (GIB) had been displaying in a bare patch, puffing out his neck feathers and bobbing his neck in synchrony with his impressive booming call. Just then, I saw two wolves trotting through the grass about 300 metres from the bustard. A skittish herd of 20-odd blackbucks kept a watchful eye on the predators nearby. I was in Nanaj Wildlife Sanctuary in Maharashtra, and the place truly felt like a living, thriving grassland ecosystem.

Except that the GIB male performing his courtship display had been doing so for months, without being able to attract a female, according to the forest guards. During the last decade, the numbers seen in Nanaj had come down from 20-30 to a single pair, mirroring trends in GIB population in the rest of the country. The purported reasons for its decline range from increase in numbers of stray dogs to change in grass composition and habitat fragmentation over the years. The few wolves I had seen were part of the five to 10 individuals left in the area that roam the sanctuary and its surrounding areas, seeking out food in nearby villages as well. Blackbuck numbers had also whittled down to 200-odd individuals over the past few years. A grassland ecosystem is in serious trouble. But no one knows why.

Grasslands have historically been one of the most neglected ecosystems in India, despite their tremendous biodiversity and critical role as grazing grounds for pastoral people. In the hue and cry over the disappearance and degradation of forests, the fate of grasslands has been totally eclipsed. There is acrimony over measurement of “closed forest” and “degraded forest”; “open-canopy forest” and “closed-canopy forest”, but no one knows the types and extent of natural grasslands left in the country. Worse, grassland habitats show up as “degraded” or “open scrub forest” or “non-forest” in the satellite imagery used by the Forest Survey of India. This is a tragedy, given that grasslands support livelihoods of pastoralists and play host to some of the most endangered species in India.

There are alpine grasslands in the high Himalayas and flood-maintained wet grasslands in the Terai but the most widespread type are the semi-arid grasslands of peninsular India that stay that way either due to poor soils, low rainfall and/or anthropogenic fire, not following the process of succession to woodland. In the past, such grasslands covered large parts of the country, including Rajasthan, Gujarat, Madhya Pradesh, Andhra Pradesh and Maharashtra. Cheetahs, lions, wolves, foxes, nilgais, chinkaras and blackbucks, among other species, roamed these grasslands. Many bird species are specialised to live in this seemingly harsh terrain where temperatures fluctuate drastically between summer and winter. Larks, wheatears, grasshopper warblers, floricans, stonechats, harriers, quails, eagles and sandgrouse form part of a surprisingly rich array of grassland bird groups. Few people realise that grasslands have as many species adapted to living in them as do rainforests or mangroves. The Lesser Florican and the Bengal Florican are two highly endangered birds whose survival is closely linked to the health of grasslands.

Yet this is a habitat that has almost but vanished from India’s landscape. Small vestiges remain. Natural grasslands tend to be located in low-lying and flat areas in alluvial plains and dry plateaus. That is where people most want to settle as well. It is much easier to clear grasslands for agriculture than forests of any kind. People even evolved crops such as millets that could survive the poor soils of this ecosystem. 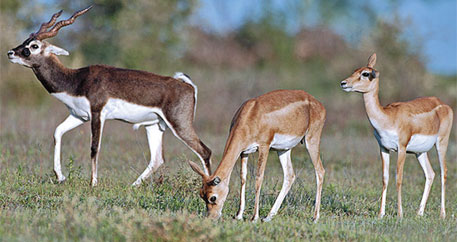 Even grassland sanctuaries such as Nanaj started small, barely six sq km–– too small to retain their flora and fauna for long. Ecologists world over have shown that small habitat fragments tend to gradually lose species, particularly those requiring large areas, or are highly specialised. The fact that some of the animal species still exist in Nanaj is probably due to the fact that there are large areas of private fallow lands, unused grasslands and agricultural fields around the sanctuary that can support the foraging needs of blackbucks and wolves.

Ironically, the ways in which this habitat has traditionally been over-protected by the forest department have probably contributed to its decline.

Grasslands are ecosystems that can absorb a certain degree of human use and often, thrive upon a moderate degree of disturbance caused by low-levels of grazing, fodder collection and fire. By excluding any and all degree of human use, the managers may unwittingly have brought about the beginning of the end of this ecosystem. This is because of two underlying processes––the constant but low levels of disturbance due to grazing reduces the dominance of a few competitive herb and grass species that might otherwise take over the entire range. Grazing also reduces chances of trees coming up which intermittently colonise and germinate on their own. Yet, over-grazing by livestock can equally well contribute to single-species dominance and spread of invasive weeds that can destroy grasses.

Much research remains to be done, particularly on the aspects related to human use and management. The forest department does not encourage such research, thinking that it is not of much importance to management. However, the department itself has been guilty of manipulating the ecosystem by planting trees in grasslands where they do not occur naturally. Such plantations can completely alter grasslands by shading out grasses and creating habitat for woodland species where there were none.

Human manipulation is rampant in many other protected areas, and few studies have been undertaken to monitor its effects. For instance, in Kalakad-Mundanthurai sanctuary in Tamil Nadu, controlled fire has been used as a management tool to reduce the dominance of lime grass (Cymbopogon flexuosus), an unpalatable species, to improve forage for wild herbivores. However, long-term studies indicated this practice was instead encouraging the grass species due to the extant ecosystem dynamics. This counter-intuitive result could be discovered only via three to four year-long field experiments.

Any chance of survival of grassland sanctuaries such as Nanaj is further reduced by the complete lack of attention to local socio-economic contexts. Nanaj sanctuary, for instance, has created a hostile farmer community around it ever since it was established. Villagers, unfortunately, see this last vestige of grassland as the reason for their deprivation because no land use change or construction is allowed on the private lands encircling the sanctuary. Further, blackbucks from the sanctuary raid crops in the surrounding farms, causing losses to marginal farmers. Yet, never has the forest department reached out to the public to explain the reasons for freeze in land use or discuss possible compensatory mechanisms for crop damage. Without any local support, it is unlikely that this tiny sanctuary or its species will survive for long.

In 2003, Asad Rahmani of Bombay Natural History Society wrote about the disappearance of GIB from Karera sanctuary in Madhya Pradesh. One of the reasons, he said, was the elimination of fodder-collection, a practice that could well have been compatible with bird breeding, given a careful grassland management. After detailed studies, his research group had suggested controlled grass extraction in the post-monsoon period after bird breeding was over. In addition, they recommended setting aside small core areas, protected from cutting, to serve as bird refuges. None of these suggestions were taken on board, leading to disappearance of the species. The unfortunate story of grassland disappearance in India apparently has much to do with institutional and historical factors, and not just biology.