Monsoon begins to withdraw from India

The south-west monsoon has already withdrawn from some parts of Punjab, Haryana, Gujarat and most of Rajasthan

The south-west monsoon has already withdrawn from some parts of Punjab, Haryana, Gujarat and most of Rajasthan

India’s long-time beneficiary visitor, the south-west monsoon started withdrawing (officially) from Wednesday, September 23. In the first round of withdrawal, the monsoon withdrew from western Rajasthan and some parts of north-western Gujarat. The conditions for the withdrawal were in place from the past weekend when simultaneously heavy rains were impacting Assam and Meghalaya. As was expected and mentioned in my previous blog, heavy rains triggered landslides and flooding in Assam, killing around 36 people till now and affecting over one million people. Goalpara district of Assam has been the worst hit. In Meghalaya, (personally speaking, I didn’t read about such a catastrophic flooding in recent times) 39 people have lost their lives (official toll on Thursday) and many have been affected. Sadly, the death toll will be rising in the coming days along with a rising threat from water-borne diseases once the flood water recedes.

In the second round of withdrawal, on Friday, September 26,  monsoon withdrew from more parts of Rajasthan (it now has almost exited Rajasthan), Gujarat and parts of Punjab and Haryana. 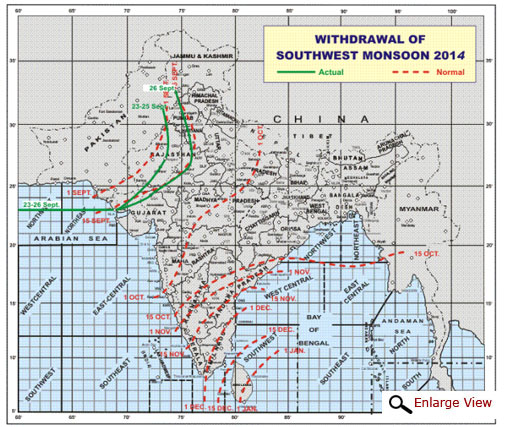 Monsoon to withdraw further in the coming days

As can be seen from the above GFS weather model, showing conditions at 850mb (or roughly 5,000 ft above sea level), on  October 1, clockwise winds are visible over aastern Gujarat. That’s an anticyclone or a high pressure region which will continue bringing dry winds in India from north-western parts like Pakistan. For this reason, no wind from Arabian Sea will enter India at this level and this will maintain the momentum of monsoon’s withdrawal from northern parts of India and initiate the withdrawal in central India also. We can expect the monsoon withdrawing from entire Punjab, Haryana, Delhi NCR, Rajasthan, more parts of Gujarat, some parts of Madhya Pradesh and Himachal Pradesh by this month end.

No severe weather expected over next few days
The weather in India will be quiet in the coming (at least) five to six days with no severe weather threat erupting. Some rainfall will be witnessed in Kerala, Karnataka (interior parts) till Monday but there is no rainfall threat to north-east India. The weather in rest of India will continue to be the same as it is right now—mostly dry. Maximum temperatures will be in the 35-40°C range in Rajasthan, Haryana, Delhi NCR, eastern Gujarat as can be seen in the long range temperature forecast of GFS model. 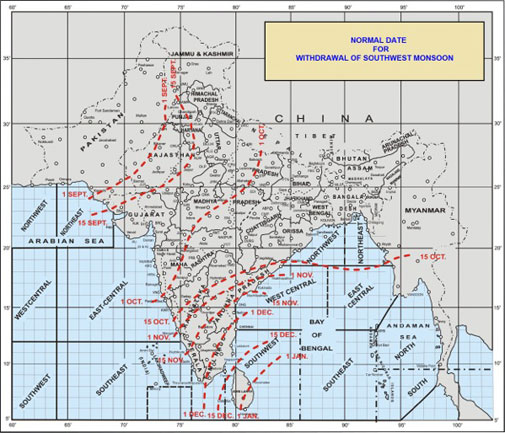 Eleven out of 36 meteorological subdivisions have seen deficient rainfall in a period between June 1 and September 25. Monsoon rainfall has been “normal” in the remaining 25 subdivisions. With just four to five days remaining for the season to officially end in India, the rainfall statistics will not be changing much now and all India rainfall departure of south-west monsoon shall settle close to -12 per cent. The 2014 south-west monsoon has performed the worst in Haryana-Chandigarh-Delhi subdivision and western Uttar Pradesh, followed by Punjab, eastern Uttar Pradesh, Marathwada, and Telangana. Its best performance is likely going to be in Jammu and Kashmir (where it wreaked unprecedented devastation in September and southern interior Karnataka.