Latest rainfall data shows 18 per cent monsoon deficit, which Met officials consider to be in the 'normal' range. But does this data really reflect what is happening on ground?

Latest rainfall data shows 18 per cent monsoon deficit, which Met officials consider to be in the 'normal' range. But does this data really reflect what is happening on ground?

It's a good “statistical” news about the chief finance minister of India, the South-West Monsoon. The all India rainfall between June 1 and August 6 this year is just 18 per cent less than normal

A rainfall of 418.4 mm has been recorded in this period (June 1 to August 6) as against the normal 508.1mm. These figures aren’t the simple averages or the sum of the rainfall recorded in the nation but are something called “weighted averages” where proper weights (some numerical values, based on distances in this case) are assigned to the observations and then the average is calculated. Measuring precipitation is very troublesome and statistically important in the case of rainfall as relative distances between the observatories recording the rainfall also matter and hence has to be considered in the average.

Actually there are lots of ways which the precipitation can be measured.

So why do I say its a good “statistical” news? 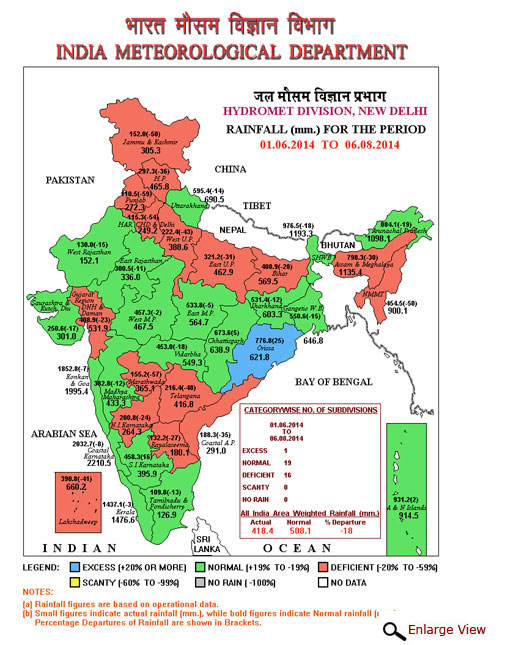 1) Out of the 36 nicely coloured regions (meteorological subdivisions) in India as shown in the above picture, there is only one blue region: Odisha where excess rainfall (+20 per cent of the normal or more) has been reported.

2) Green regions are those which have so called normal rainfall conditions. But out of these 19 regions, only three—southern interior Karnataka, Andaman and Nicobar Islands and Chattisgarh—have seen more than their respective normal rainfalls. Remaining 16 still have less than normal rainfall.

3) Counting Odisha, only four out of the 36 subdivisions have recorded more than normal rainfall—just 11 per cent in totality.

4) There are 16 subdivisions which experienced deficient rainfall; they mostly are in north India.

6) Till now 62 per cent sowing of Kharif crops has been done in Rajasthan and Gujarat and 73 per cent in Marathwada; last year it was above 120 per cent at this time.

7) Due to the vagaries of rainfall, still a few areas in Rajasthan and other parts of India are waiting to sow the kharif crop. 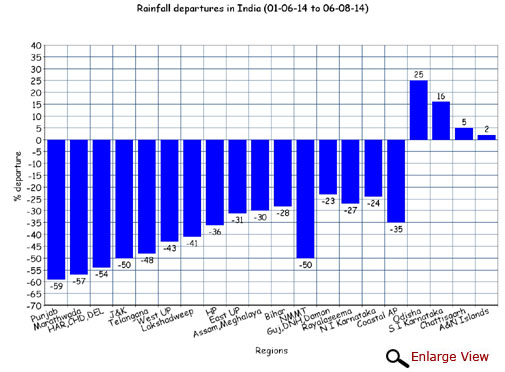 So the slump in the monsoon in north India continues and the “man of the match”, central India, is keeping everyone's hopes alive because of low pressure systems, called monsoon depressions, moving in from the Bay of Bengal.

In the next few blogs, I shall discuss monsoon withdrawal in detail, but let's have a quick look at how it can affect north India, particularly Rajasthan.

Monsoon starts packing its bags in September and this is called the withdrawal of monsoon. Its dates are as uncertain as the monsoon onset dates. 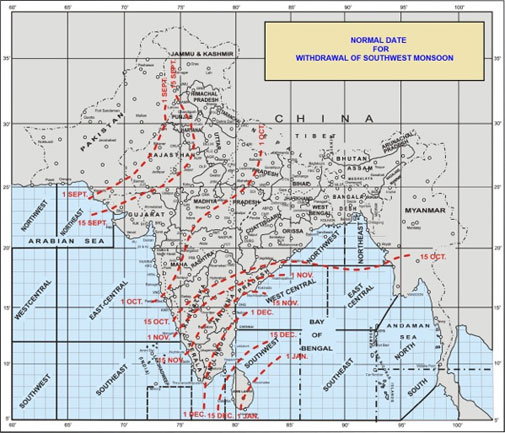 Weather forecast
South-western parts of Rajasthan will receive some rainfall today (Thursday) because of low pressure system from the Bay of Bengal which has flooded Odisha. However, as this system will die in the next 24 to 48 hours, rainfall will start decreasing in the state and will disappear completely by about August 10. There are still some areas in Rajasthan where sowing hasn’t taken place and this dry phase of the monsoon will decrease the possibility of sowing in these areas.

Rains will decrease in southern and central India also. No fresh monsoon depression is expected at least till August 12. As these key players will not be performing for the next few days, I don’t expect any significant improvement in the all India rainfall.

Thunderstorms and rains are likely in Odisha for the next few days and rains will intensify across Nepal and eastern and north-eastern states of India from August 11, particularly in Arunachal Pradesh and Sikkim. Last week's landslide in Nepal, which created a flood threat in Bihar,  has eased for now. None the less, rainfall must be monitored across Nepal and east India after August 9 (rains will intensify in Bihar from that date) to avert another flood like situation and possibility of people getting affected because of the landslides in Sikkim and Arunachal Pradesh.

*Note : The rainfall figures given in the blog were obtained on  August 6 and they will vary with time. For the latest rainfall statistics, click here